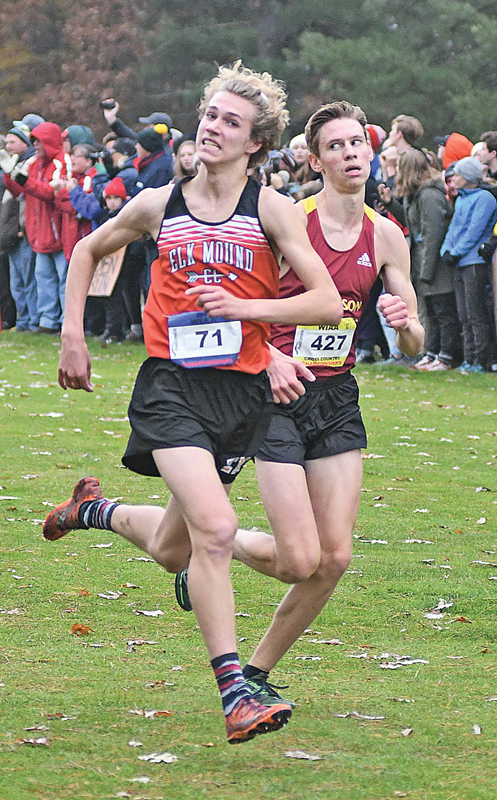 WHERE DID YOU COME FROM? Platteville seniorJace Serres (right) gave a look of surprise as Elk Mound junior Cade Hanson passed him near the finish line in the WIAA Divsion 2 boys’ state cross country race held Saturday, October 27 at the Ridges Golf Course in Wisconsin Rapids. This was the third straight year that Hanson has competed in the state championships. He finished 17th beating his 2017 state time by ten seconds. —photo by Shawn DeWitt

WISCONSIN RAPIDS — With a light rain falling and clouds keeping the sun from making an appearance, Elk Mound’s Cade Hanson took to the cross country course for one final race in 2018 at last Saturday’s WIAA state championships in Wisconsin Rapids.

The junior continued to shine for the Mounders as he showed marked improvement in this his third consecutive trip to the state meet.

Hanson, who shaved ten second off of his 2017 state run time, finished 17th in the WIAA Division 2 boys’ state championship race with a time of 16:52.0.

In his freshmen year at state, Hanson finished with a time of 17:45.67 in 46th place, and a year ago he ran a 17:02.89 for 16th place. In both of those previous state championship runs, Hanson competed in the Division 3 state field.

But this year, Hanson and the Mounders made the jump to Division 2, which meant larger schools and more skilled runners.

But Cade proved equal to the challenge.

“It was a different race for him with all the other top runners in D2 surrounding him, but he stayed patient and ran his race,” Fredrickson commented.

“The 17th place finish was wonderful for Cade and competing at that level put a nice topping to a wonderful season for both him and the Mounders,” coach Fredrickson said.

The Mounders will lose only two of their runners to graduation in the spring, but as Hanson heads into his senior year along with a strong group of juniors, the Elk Mound cross country team will only improve with hopes of heading to state once again next fall.

This year’s top runner in the WIAA Division 2 state championship race was senior Henry Chapman of East Troy with a time of 15:59.3. Chapman helped the East Troy Trojans finish third in the final team standings with 138 points.

Taking second place was McFarland senior Andrew Pahnke with a time of 16:11.7, McFarland went on to finish in fifth place.

The 2018 WIAA Division 2 team state championship went to Valders as their five scoring runners finished in the top 30 for a winning score of 98. Notre Dame was this year’s D2 state runner-up with 114 points. 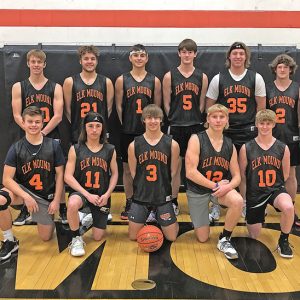 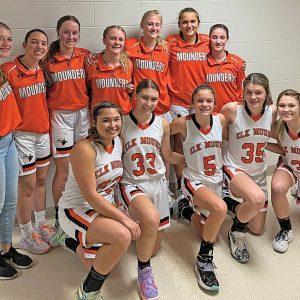 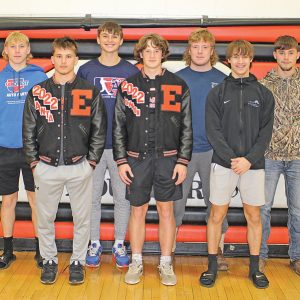