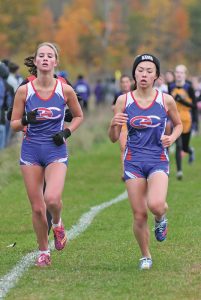 STRIDE-FOR-STRIDE — Hilltopper junior Isabella Williams (left) and Emily Bethell ran side-by-side during much of the Dunn-St. Croix conference cross country race in Boyceville last Thursday. Williams finished fifth while Bethell placed ninth. Both earned all-conference honors which was based on their finishes. —photo by Shawn DeWitt

BOYCEVILLE – Cold and blustery were the weather conditions when the Hilltoppers’ cross country teams ran at the Dunn-St. Croix Conference cross country meet this past Thursday at Tiffany Creek Elementary in Boyceville.

Despite the conditions the Glenwood City runners fared well at the October 11th championship with five runners taking home all-conference honors and the girls’ team coming in second in one of closest contested races in the meet’s history.

For the  girls, Elk Mound took top honors with 44 points, with Glenwood City just a point behind in second with 45 points and Durand right on their heels with 46 points to place third.

The Lady Mounders’ victory, their  first in the program’s history, prevented the Glenwood City girls from capturing a third straight title and fourth in five years.

LEADING THE Glenwood City girls to a second-place finish in last Thursday’s Dunn-St. Croix cross country meet was freshman Bella Simmons. she ran a 21:05.38 on the 5,000 meter course to finish in third place and earned first team all-conference honors. —photo by Shawn DeWitt

First team all-conference honors went to Toppers’ freshman Bella Simmons who came in third overall with a time of 21:05.38. Junior Izzy William’s was fifth and also garnered first team honors. Junior Emily Bethell was next for the Hilltoppers in ninth place, making her second team all-conference. Freshman, Kendall Schutz crossed the finish line in eleventh place also putting her on the second team for all-conference.

“I said a couple of weeks ago it would be a [heck] of a girls’ race between Glenwood City, Elk Mound and Durand, and it certainly turned out to be,” stated GC head coach Matthew Schutz.

“Elk Mound was favored and Durand had just beaten us in Spring Valley two weeks ago.  Unfortunately, we lost to Elk Mound by one point, but took second just in front of Durand by one point as well.  It would have only took one of our girls to switch spots with a girl that just out ran them, or even a Durand and Elk Mound flip flop in the race to take the championship, but that’s what makes cross country great as teams compete. It hurts worse when it’s that close, but at least we fought and clawed our way back toward the top.”

“I told the girls to remember how this felt as we head into the sectional next week. Every place counts. We will fight now and run for the sectional championship at Boyceville once again, and for our fifth straight trip to the state championship.”

Freshman Samantha Peterson was the fifth Hilltopper to cross the line in 20th place. Right behind her were junior exchange student, Azra Ibrahimagic in 22nd and sophomore, Gabby Moede in 25th.

For the boys’ race it was once again Elk Mound taking the top spot with a score of 43. Durand was only three points behind them with a score of 46. The Toppers came in sixth with a team score of 128. It was also the Mounder boys’ first conference crown.

Individually it was junior, Jabin Hojem who made second team All-Conference when he crossed the line in 12th place with a time of 18:46.84.

Coach Schutz recapped the boys’ race as follows: “As for the boys they fought throughout the race.  The preview of the boys’ race showed that we would have a hard time getting a boy onto the all-conference team.  I told our top two boys, Jabin and Austin, that they would have to beat at least the number two Spring Valley runner to have a chance.”

“It happened that Jabin got by the whole Spring Valley team by the end of the race to claim 12th place,” noted Schutz. “He ran a great race waiting until the last mile to start picking off runners as he and Austin were around 16-17 with a mile to go.”

“Besides Jabin, some of the other boys did finish with PRs for the season to highlight their race.” 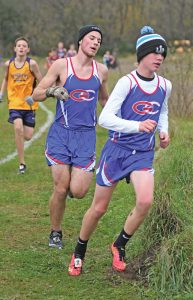 Freshman Austin Nelson was indeed the number two runner for Glenwood finishing 19th with a time of 19:15.68. Junior Elijah Simmons and freshman Thomas Moede were the next two runners for the Toppers crossing the line in under twenty minutes.

Durand had the top individual finishers with freshman Madison Sand winning the girls’ 58-competitor race in 20:04 and senior Isaac Wegner topping the boys’ field of 69 runners with a 16:26.34.

Both the boys and girls will compete this Saturday, October 20th at the WIAA Division 3 Sectional meet to be held in Boyceville once again. The competition gets under way at 11 a.m. when the boys take the course. Come and cheer on both the teams and see if the girls can make it to state for the fifth year in a row.

The top two teams and top five individuals not on a qualifying team will earn a trip to the October 27 State Championships in Wisconsin Rapids.

GC girls fall to Grantsburg and Pepin/Alma to open season