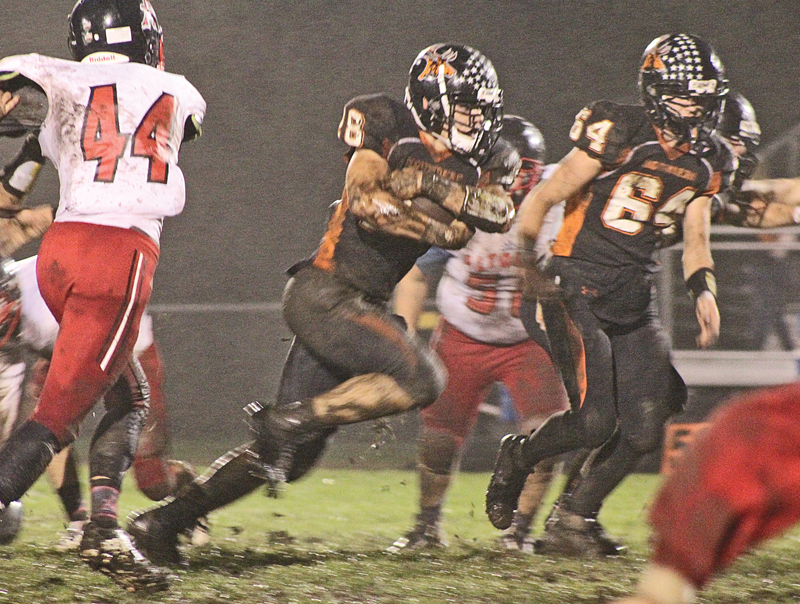 TOUCHDOWN RUN— Senior Brady Redwine takes in his seventh touchdown of the night from 38 yards out. —photo by Amber Hayden

“Tonight was a special day for us, it was homecoming and the guys played hard and there was great leadership on the field,” stated head coach Dave Lew.

As a team, Elk Mound, who had no need to pass the ball, finished with 546 yards on 37 hauls. The squad’s two other rushing TDs were turned in by Blaze Todd, a 7-yard run, and Logan Schultz , a 26-yard jaunt.

Elk Mound scored early and often with four touchdowns in the first quarter and three more in the second to lead 46-0 at the intermission. It tacked on two more scores in the third before pulling “back the horses”.

The Mounders started their scoring explosion on the first drive of the night. Starting at the 37 yard line, after Altoona failed to get a first down, Brady Redwine broke off and rambled for 58 yards on the second play from scrimmage for the first of his seven touchdowns of the night. A failed extra point kick would bring the score to 6-0.

The Railroaders couldn’t find an answer to shut down the senior running back Redwine, as he went on to score three more touchdowns in the first quarter and bring it to 25-0 in favor of Elk Mound.

Altoona struggled against a tough Elk Mound defense as Redwine and Brett Lew had 14 total tackles between the pair, one of which coughed up a force fumble for the Railroaders.

Quarterback Colton Ward fumbled the ball during the second quarter, but Redwine quickly fell on the ball losing only two yards on the play. Blaze Todd followed the fumble with a touchdown of his own from seven yards out and a successful kick from Jake Mentzel brought it to 32-0. 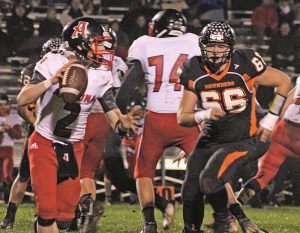 GOING FOR THE SACK— Mounder Ryan Zurbuchen (#66) goes in for the sack on the Altoona Railroader’s quarterback during the Elk Mound homecoming game. —photo by Amber Hayden

Redwine continued to run wild, adding touchdown runs of 34 and 38 yards before the first-half clock expired with the Mounders leading 46-0.

Redwine chalked up another score just a minute and 20 seconds in the second half as he scored on a 52-yard run. Mentzel’ PAT made it 53-0.

Every player for Elk Mound made their way on to the field during the homecoming game with the junior varsity squad seeing more play time in the third and fourth quarter.

Logan Schultz scored the last of Elk Mound’s points on a 26-yard run as well as running the ball for the two-point conversion and ending the third quarter with the Mounders well in front 61-0.

There was no scoring in the final quarter of play.

“We played a good game,” stated coach Lew, “next week is for the conference championship.”

With a Mondovi loss at Spring Valley that same evening, Elk Mound is now in a three-way for first place with those two and  will host Glenwood City this Friday to successfully defend its conference championship and at least earn a share of the 2018 crown. 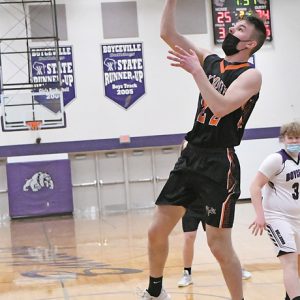