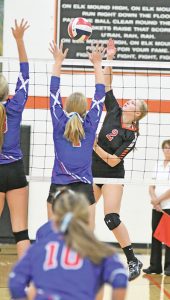 SENDING THE BALL over the net was the Mounders’ junior Sophie Cedarblade (#2) during a home match against Glenwood City last Thursday. —photo by Shawn DeWitt

Head Coach Samantha Stelter and her Elk Mound volleyball team have had a successful season thus far with a overall record of 20-10 and a Dunn-St. Croix conference mark of 6-1.

The Mounders took to the road again last Tuesday, October 2 to face the Elmwood Raiders and walked away with a win in three, and returned home on Thursday, October 4 to take on the Glenwood City Hilltoppers and claimed another 3-set victory in the Dunn-St. Croix conference.

Elk Mound finished up their conference season with a match in Mondovi last evening, October 9 and will compete in Altoona on October 13 to conclude the regular season. Tournament play begins next Tuesday, October 16.

“We came out aggressive in game one,” stated head coach Samantha Stelter, “we played well and the girls moved and communicated well in-system and out-of-system.”

Senior Morgan Radtke had a solid night for the Mounders, leading the way with 14 kills, three serving aces, six blocks and four digs.

McKenna Diermeier helped on attack with ten kills, Kaitlin Schiferl had four and Sophie Cedarblade, Kortnee Halgren and Maggie Bartig each tacked on three a piece.

“Much like in Spring Valley, the girls lost their focus and Elmwood stepped their game up,” explained Stelter, “they had some good touches on the block, and their offense was swinging well.”

Senior Mounder Abigail Curry took charge on defense from the back row with 12 kills against the Raiders and Kortnee Halgren contributed 11 digs to the Mounders 41 total digs.

Halgren suffered only two errors handling the ball against the Raiders, Halgren had 20 assists in her three sets played. Qwynn Tyman contributed 11 assists for the Mounders, averaging her at 3.7 assists per set.

“Credit to them (Elmwood) for fighting and taking advantage of our lack of focus and effort in the third set,” Stelter commented. 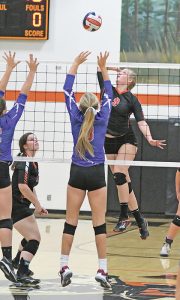 GLIDING TOWARD the net to make this hit was the Mounders’ Maggie Bartig (#9) during a home match against Glenwood City last Thursday, Ocotber 4. The Lady Mounders won in three sets. —photo by Shawn DeWitt

The Glenwood City Hilltoppers came out strong against Elk Mound, causing the Mounders to be off their game for the entire night.

“Glenwood was a competitive team and they put some nice power behind the ball,” stated Stelter.

Senior middle player Morgan Radtke had a tough night with only ten kills against Glenwood City, the Mounder power house had three aces from the service line as well as five digs.

Kaitlin Schiferl helped on attacks with five kills and McKenna Diermeier and Kortnee Halgren each put up four kills a piece.

Halgren led the defense with ten digs, followed by Elk Mound librero Abigail Curry with ten digs as well. Halgren also had five aces and 22 assists against the Toppers team.

“I thought the girls remained calm and composed and did a nice job of just working to control what they could and getting the job done,” explained Stelter.