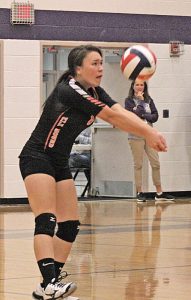 GET IT OVER— Hailey Blaskowski (#8) sends the ball back over on a third hit in the first set against Boyceville. —photo by Amber Hayden

The Mounders found themselves in two conference volleyball matches this past week.

Facing Durand and Boyceville, Elk Mound walked away with a pair of three-set sweeps albeit a bit rough.

Blocking errors and missed serves plagued Elk Mound during its home match up against Durand on Tuesday, September 18, but the Mounders left the Panthers tucking their tails on their ride home.

Trekking to Boyceville two days later on Thursday, September 20, the Mounders faced a determined Bulldog team and the Elk Mound offense seemed to be back on its game taking home a win in three sets.

Elk Mound hosted rival Colfax last evening (September 25) in a key conference match and will take to the road again Thursday, September 27 for a match in Spring Valley. The Mounders will then head to Elmwood next Tuesday, October 2 for a contest against the Raiders.

The September 18 contest against Durand wasn’t the cleanest win for the Mounders but they walked off the court with a convincing win in three sets by scores of 25-17, 26-24 and 25-17.

According to head coach Samantha Stelter the ball handling, blocking errors and missed serves were things they can control as a team and need to work on improving.

“But on the flip side of all of it our offense did much better,” commented Stelter, “last weekend we were lucky to have maybe two hitting a positive percentage, the girls adjusted and almost all the hitters hit positive.”

Kills were led by senior Morgan Radtke who had a 51.5 percentage overall in 17 kills and McKenna Diermeier contributed three kills and 12 digs.

Trailing most of the second game, the Mounders showed their determination and will to win explained Stelter.

Kortnee Halgren and Abigail Curry led the Mounders in defense with 13 digs a piece, Radtke added on 11 more and Qwynn Tyman tacked on three more.

Leading in assists with 20 attempts was Halgren with 19 assists, Qwynn Tyman contributed six more and Abigail Curry added one more for the Mounders.

“Durand really challenged our hitters and put up an aggressive block and their passing and defense was impressive, they are a good team and I anticipate they’ll fair quite well the remainder of the season,” commented Stelter. 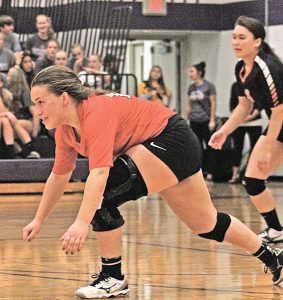 READY FOR THE DIG— Librero Abigail Curry (17) sets up for the dig right before the second set was halted due to a tornado warning. —photo by Amber Hayden

As a storm brewed outside the Boyceville High School, the Mounders and Bulldogs had a storm brewing of their own inside.

Elk Mound made the trip to Boyceville with the hope of adding another mark to the win column and did so in three sets with scores of 25-18, 25-13 and 25-12 giving the Mounders a conference record of 3-0.

“We got off to a slow start, I felt as though the girls were flat during warm-ups and it took at least half a set before we really started to play our level of ball,” commented coach Stelter.

During the three-set win, Elk Mound had ten aces and eight serving errors according to coach Stelter, leading the team with three aces was senior Abigail Curry,

Even with the serving errors the offense managed to play well having only five hitting errors and a kill percentage of 45 percent.

“The exciting thing about those numbers is a lot of our offense came in transition from defense,” stated Stelter, “our defense was able to provide quality digs to give our hitters sets they could attack aggressively.”

Diermeier took charge on the defense for the Mounders with 15 digs and Abigail Curry got into the mix with another 12 digs.

As the start of the second set got underway, administrative staff members put the game on hold while players and fans were moved into hallways and classrooms to wait out the tornado warnings.

“We had the storm delay a few points into the second set, but the girls kept high energy in the locker room and they didn’t let it break their momentum,” Stelter explained.