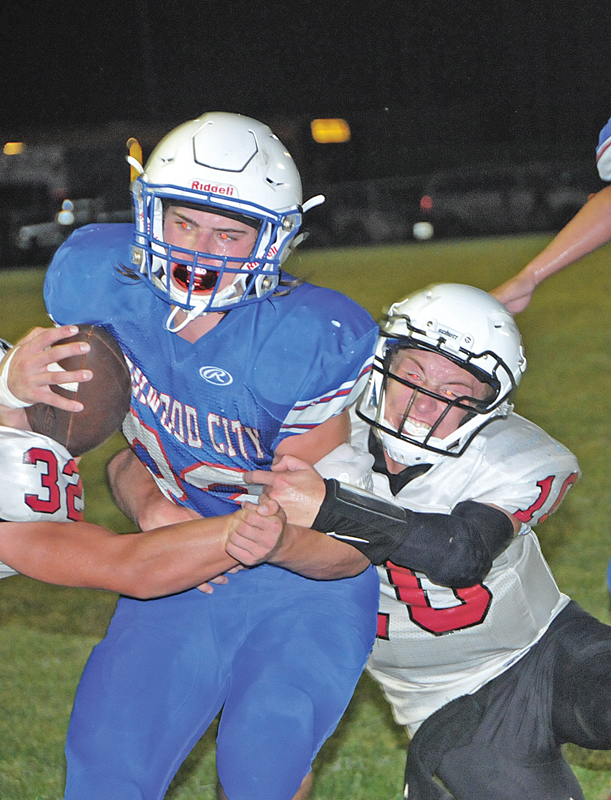 FIRST SCORE — The Toppers’ Caleb Petersen scored on this two-yard run in the second quarter for Glenwood City’s first points in last Friday’s home football game against Spring Valley. The Cardinals went on to snap the Toppers’ three-game win streak with a 26-16 victory. —photo by Carlton DeWitt

GLENWOOD CITY — For the second consecutive game, the Glenwood City football team got off to a slow start and found itself trailing early when it hosted Spring Valley last Friday evening.

But unlike the previous week in Durand, when the Hilltoppers overcame fumbles and an early 6-0 deficit to post a decisive 15-point win, there would be no comeback against a strong Cardinal squad.

Spring Valley posted three first-quarter rushing touchdowns to vault to a 20-0 advantage. And although Glenwood City played much better in the second quarter and beyond, it never fully recovered and lost the September 14 Parents’ Night match-up, 26-16.

Spring Valley scored all of its points in the first half.

“We got off to a tough start for the second week in a row,” stated Glenwood City head coach Shane Strong. “We didn’t play disciplined defense the first few drives.”

“You can’t afford to make mistakes against a team like Valley,” Strong continued. “They capitalize on your misreads well.”

The loss snapped the Hilltoppers three-game winning streak, and suffered their first Dunn-St. Croix defeat and are currently 2-1 in league play and 3-2 overall. Spring Valley, a preseason favorite, is also 3-2, stayed unblemished in conference action at 2-0.

In the final stats sheet, the Toppers and Cardinals were fairly even.

Glenwood City’s Hadin DeSmith had only 17 yards of passing with Spring Valley QB Aaron Borgerding finishing only slightly better with 29 yards. The Cardinals accumulated another 233 yards on the ground over 42 carries while the Toppers ran for 204 yards in 45 attempts.

Glenwood City opened Friday’s gridiron game by kicking off which Spring Valley returning 54 yards to the Hilltoppers’ 11 yard line. Three plays later the Cards scored on Dakota Kerr’s 1-yard run. Aaron Borgerding kicked the extra point through and Valley was on top with a 7-0 score at 9:53 of the first quarter.

On their first possession, the Toppers had a holding penalty that forced a punt after three plays.

Spring Valley started on its own 40. The Cardinals picked up 12 yards on first down. Then on the next play, Dylan Bosshart took the hand off and ran 48 yards for Spring Valley’s second touchdown. Borgerding again  kicked the PAT to push the Cardinals’ lead to 14-0 with 5:16 left in the first quarter. 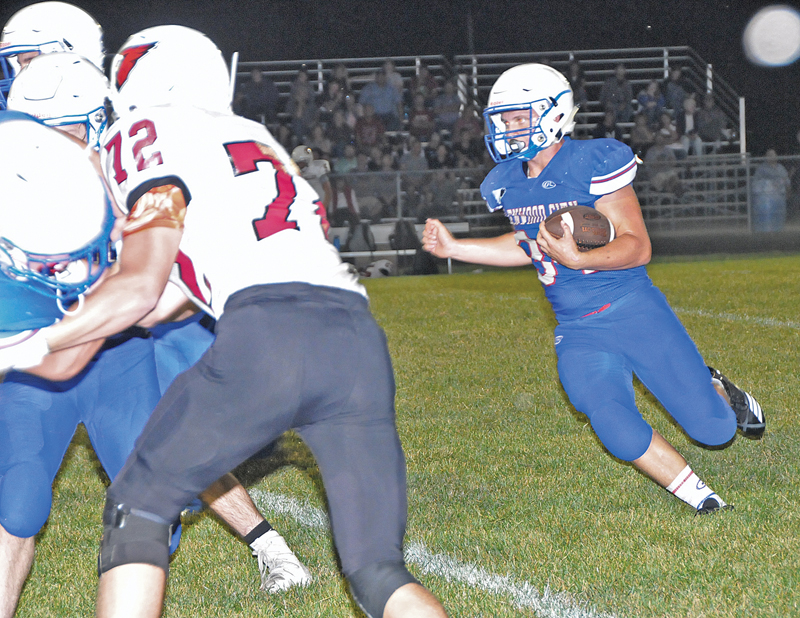 With 59 seconds still left on the first-quarter clock, Aaron Borgerding punctured the end zone on a 4-yard QB scamper to put another Spring Valley TD on the board, although the kick missed, the score read 20-0 in the Cardinals’ favor.

It was not until the second quarter that the Topper defense finally came alive and recovered a Spring Valley fumble on their own 49 and drove to the end zone in six plays with Caleb Petersen going around the right side for the two-yard touchdown. Hadin DeSmith crashed into the end zone for the extra two points to put the score at 20-8 with 5:15 left in the first half.

Spring Valley would add another six with just 11 seconds left in the first half when Borgerding again took the ball to pay dirt on an 8-yard haul, but missed the extra point and the halftime score stood at 26-8 in Valley’s advantage.

“When we settled into the game plan and focused on our read keys we played much better,” Strong said. “We shut them out in the second half not because of scheme adjustments but more of a check up from the neck up.”

Glenwood City added a second score in its first position of the second half.

A 69-yard drive capped by a 32-yard Hadin DeSmith run for the score at 8:20 coupled with the two-point conversion run by Petersen made the score 26-16.

The Toppers’ Chase Weeks recovered another SV fumble at the Cards’ 34 and quickly moved the ball to the SV 16. But a motion penalty and a quarterback sack moved the ball back to the 32 yard line and the Toppers punted the ball away as the third quarter ended with the score at 26-16.

Glenwood City moved into the red zone quickly in the fourth quarter, but were stopped at the Spring Valley nine yard line and had to turn over the ball and the rest of the game was a battle of the defenses with neither team finding an opportunity to score.

Caleb Petersen led the Toppers’ rushing attack with a score on 14 carries for 80 yards. DeSmith chipped in for a touchdown and 27 yards with Dakota Dean-Immerman adding 59 yards and Dan Loring 38 yards.

Dylan Bosshart led the Cardinals with eight rushes for 80 yards and a score with Borgerding adding 72 yards and two scores on 18 carries.

Glenwood City will face another tough test this Friday, September 21 when it travels to Mondovi to battle the Buffaloes.