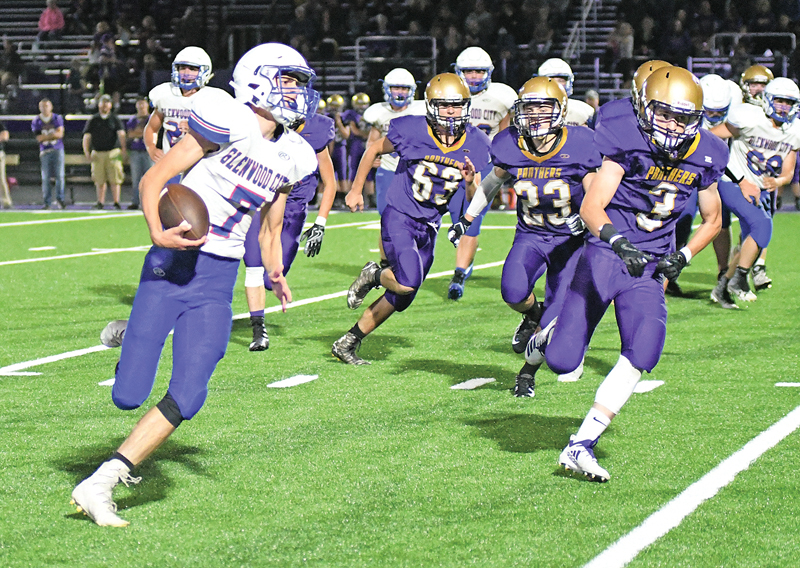 GONE — Toppers’ senior signal caller Hadin DeSmith capped a 27-0 Glenwood City scoring run in last Friday’s Dunn-St. Croix football game in Durand with this 35-yard touchdown run late in the fourth quarter. DeSmith was 3-for-4 passing for 60 yards and a score and lead the GC ground game with 72 yards and another six. The Hilltoppers won the contest 27-12 to remain unbeaten in conference action. —photo by Shawn DeWitt

DURAND — It was an inauspicious start to say the least.

Glenwood City fumbled away the football on its first three offensive possessions – one, a muffed punt on its own seven yard line that Durand turned into its and the game’s first score.

But a stout Hilltoppers’ defense keep the game close until the offense could get back on track.

And when it did, Glenwood City responded with 27 unanswered point to spoil the grand opening of Durand’s $2.5 million Bauer Built Sports Complex, which features a state-of-the-art artificial football surface, all weather track, a new grandstand and press box and a large full-color score and video board, with a 27-12 road victory.

“We just tried to stay positive with them (players) after the rough start of the game,” stated Glenwood City head coach Shane Strong.

“The kids responded by playing good defense and we were (finally) able to move the ball well.”

Once they were able to secure their offensive possessions, Glenwood City managed good gains against Durand.

Although the contest was knotted at six during the intermission, the Hilltoppers already had a 142 to 59 advantage in total yardage at the conclusion of the first half.

By game’s end, that disparity had grown to 293 and 143 with much of the Panthers’ second half yardage coming in a late fourth-quarter scoring drive.

Recovered from their early game mistakes, the Toppers’ offense showed its acumen on ground and through the air.

Glenwood City distributed its 293 rushing yards well between six different players. Quarterback Hadin DeSmith led the way with 72 yards on eight carries including a 35-yard touchdown run for GC’s final score, Dan Loring added 66 yards on 18 hauls and Dakota Dean-Immerman and Caleb Petersen both chipped in for a touchdown with 44 and 36 yards respectively.

DeSmith also showed a cool efficiency, completing three of his four throws for 60 yards including a 14-yard scoring strike to Peterson.

“DeSmith did a nice job leading our offense,” noted Coach Strong. “He made good decisions in the passing game all night. If we were covered up he would run the ball rather than risking an interception.” 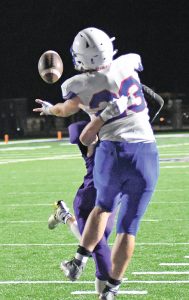 GREAT CATCH — Despite being grabbed by his Durand defender, Glenwood City senior Caleb Petersen jumped high to corral this Hadin DeSmith throw for a 14-yard touchdown on the third down and nine play. Petersen also rushed for six points in the Toppers 27-12 win over the Panthers September 7. —photo by Shawn DeWitt

While the game ended well for the Toppers, they appeared to be in dire straights at its beginning.

Just three plays into the road contest, Glenwood City turned the ball over on a Loring fumbled at its own 44.

The defense held firm for the Toppers forcing the Panthers to punt only to see things go awry on the special team’s play.

The punt went through Hadin DeSmith’s hands and Durand’s Caden Berger fell on the loose pig skin at the GC seven.

On the very next play, Panthers’ senior quarterback TJ Tulip called his own number and carried the ball into the end zone  to break the scoreless deadlock. Tulip’s two-point pass failed and left the score at 6-0 just 2:43 into the game.

Glenwood City held onto the football for only five plays following the kick off when its second offensive possession ended with another fumble on the Durand 45.

The Panthers would be forced to punt the ball six plays later.

Backed up on its own ten yard line, Glenwood City’s offense finally put together a clean and impressive drive, marching 90 yards in 16 plays and tied the game on Caleb Peterson’s five-yard scoring run at 8:02 of the second quarter. Petersen had hooked up with DeSmith on a 20-yard pass completion on the previous play to convert on a fourth down and ten. Tucker Lagerstrom missed the PAT kick to leave the score knotted at sixes.

On their next two possessions, the Panthers suffered back-to-back turnovers including the first of their three fumbles and an interception.

And although Glenwood City was not able to capitalized with points, it served to charge up the Toppers for a break-out performance in the second half.

Like the Toppers had early in the first half, the Panthers caught fumblitis to begin the second half.

After the teams had exchanged punts to open third-quarter play, Durand fumbled and Harrison Chouinard recovered at the Panthers 36.

Two plays later Hadin DeSmith found a wide open Dan Loring for a 26-yard pass play and a first-and-goal at the Durand four. On fourth-and-goal from the one, Dakota Dean-Immerman broke the goal plane at 5:10. Lagerstrom booted the kick and GC had its first lead at 13-7.

Two plays later, Lagerstrom recovered another Durand fumble to put the GC offense back in action on the Panthers’ 30.

DeSmith ran for 12 yards for a first down at the 15. Three plays later he passed the ball to Caleb Petersen, who made a great reception despite being grabbed by a Durand defender, for a 14-yard  touchdown at 2:01 of the third. Lagerstrom tacked on the kick for a 20-6 GC lead. 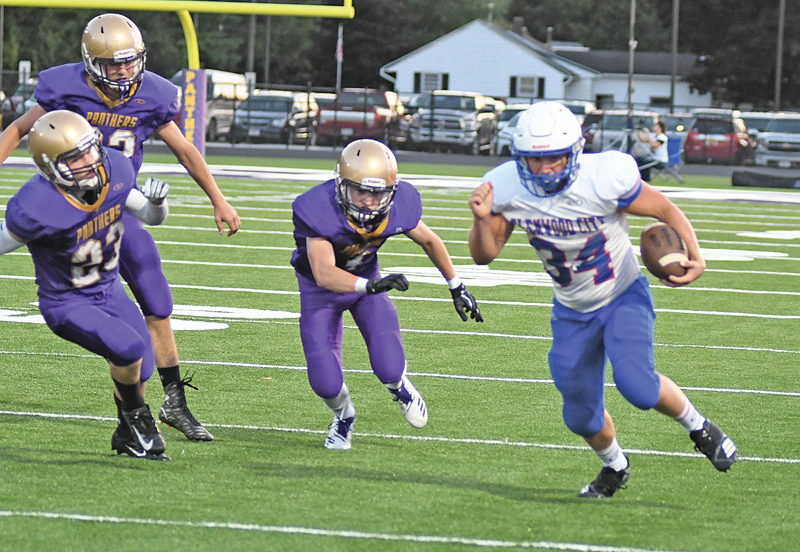 SHAKING OFF a tackle, Glenwood City running back Dan Loring (#34) heads down field for a nice gain with a host of Durand Panthers in pursuit. Loring finished with 66 yards on 18 yards as the Hilltoppers spoiled the grand opening of the Panthers’ new $2.5 million Bauer Built Sports Complex last Friday evening with a 27-12 victory. —photo by Shawn DeWitt

DeSmith used his legs to get the Toppers’ fourth and final touchdown of the evening, dashing around the end and down the sidelines on a 35-yard run to pay dirt with 3:24 left in the contest. Lagerstrom kick through his third consecutive PAT to increase the visitors advantage to 27-6.

Durand capped the game’s scoring as back-up sophomore quarterback Joey Biesterveld put the Panthers on a 74-yard scoring drive, completed by a 15-yard TD pass to Spencer Sabelko with just 12 ticks left in the game.

“We don’t have a great deal of speed but our kids are unselfish and just play hard for each other,” concluded Strong. “It’s fun to see them improve.”

Glenwood City, now 2-0 in D-SC action and 3-1 overall, looks to keep that fun going this Friday when it hosts one of the conference’s pre-season favorites – Spring Valley. 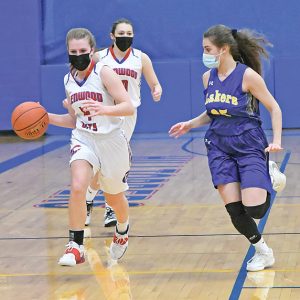