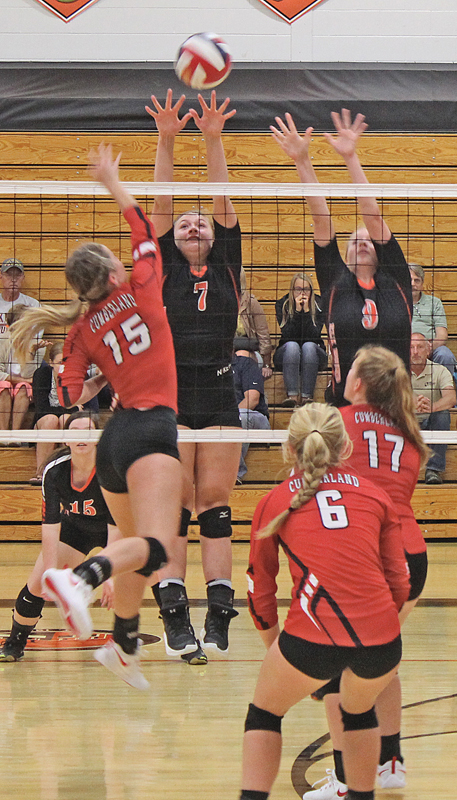 ELK MOUND — The Mounders’ volleyball squad capped a busy first week of play, which including contests against ten different school in a span of just five  days, when it hosted it’s first quadrangular meet of the season against Regis, Cumberland and St. Croix Central on August 28.

Starting the night out strong, Elk Mound took a two-set win against a tough Cumberland team. It appeared that the Mounders had found their groove, only to lose their footing and subsequent matches to both Eau Claire Regis and St. Croix Central at last Tuesday’s meet.

The Lady Mounders took care of business to open their home quad downing the Beavers of Cumberland in a pair of fairly close sets – 25-21 and 25-17.

During that opening match against Cumberland, Morgan Radtke went on the attack again to gain nine kills for the team. Kortnee Halgren had twelve assists for the offense and McKenna Diermeier and Abbigail Curry each had five digs for the defense.

The team struggles in its next match against Eau Claire Regis losing the match two set to one. Regis won a tight opening game, 26-24 but Elk Mound rebounded in the second set to win soundly 25-12. In the third and decisive set, the Ramblers scored a 15-7 win to claim the match.

Morgan Radtke and McKenna Diermeier stepped up against Regis to get eight kills a piece and Kortnee Halgren tacked on 15 more assists to her high school career.

The defense got some help from Maggie Bartig with two solo blocks and Abigail Curry had seven digs.

“We were right there with Regis and hung with a very strong SCC team,” explained coach Stelter.

The Mounders lost in two sets to Saint Croix Central with both sets going 25-18 in the Panthers’ favor.

Morgan Radtke finished her night with another nine kills added to her career and Abigail Curry had eight digs.

“I was pleased with our performance … I feel these girls are making progress each day and it’s been exciting to see our potential grow,” said Stelter.

The girls still have more than a week before they begin conference play at home against Plum City on September 13, but coach Stelter has no doubt her Mounders team will be ready to go.

The Mounders will tune-up for that Dunn-St. Croix opener when they host another quad tomorrow night (Thursday, September 6) against Elmwood, Ellsworth and New Richmond and travel to Chippewa Falls for an invitational on Saturday, September 8.