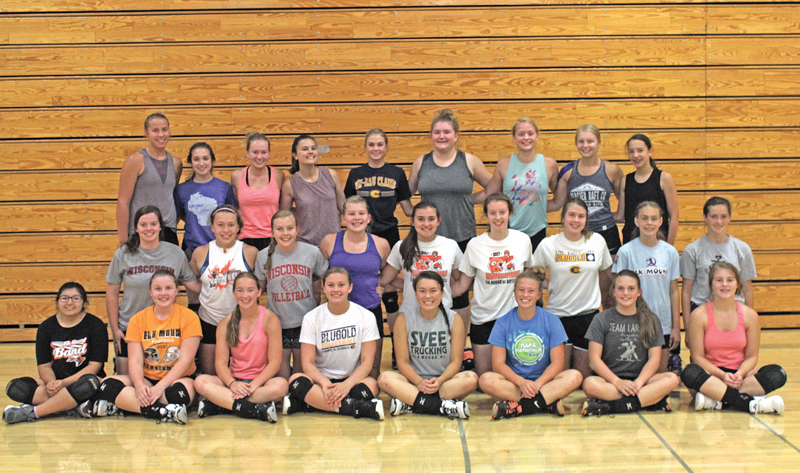 ELK MOUND — The Mounders’ volleyball team had a rewarding season in 2017, and Coach Samantha Weix sees her team building off the success they had.

With a record of 7-1 in the conference, which included a runner-up finish to rival Colfax, and 27-19 overall, the Mounders’ team managed their first win in playoff games in three years, but fell to Eau Claire Regis in the regional finals.

“We fell short of winning a conference title last season, but it was a very enjoyable season,” commented Weix.

Two all-conference players not returning this year after graduating, Allie Weber and Madysen Borofka, will be missed by the team.

With 207 kills during the 2017 season Allie Weber made a statement on the attack, she played 102 sets coming up with 20 aces on serves. Weber also played a crucial part for the defense with 323 digs during her senior year.

Madysen Borofka had a good season with 18 total blocks for the Mounders’ team as well as an impressive 796 assists in the 109 sets she played. Borofka managed 41 serving aces and just over 20 errors giving her a .918 percentage for the year.

Other players not returning for the 2018 season are Kourtney Zurbuchen and Cassidy Yakesh, the pair had 341 kills on attack and 113 digs for the defense.

Coach Weix, in her 4th season as head coach with a record of 68-56 overall and 20-4 in conference play, does believe there is good leadership from the returning players, six are returning letter winners,  with varsity experience.

Morgan Radtke returns for her 4th varsity season in the middle. She led the team on attack with a .306 percentage in her 906 total attempts, this will be a big asset to the team according to Weix. With 42 solo and 48 assisted blocks, Radtke has shown to be a well-rounded player for the Mounders’ team.

Abigail Curry will return this year after missing last season due to an ACL injury last year. “She brings leadership and court awareness and will likely settle back into a libero position,” explained Weix.

Two more players that will return to the court are Sophie Cedarblade and Kortnee Halgren. Cedarblade will take on an offensive position for the team which is a transition from the defensive role she played last year.

Halgren steps in as setter this season after playing mostly right last year. “She’s made some big improvements over the year and has been working well with our hitters,” said Weix.

While most of the girls on the team are juniors and seniors, the Mounders’ coach does see experience as something the team lacks in 2018. “We are young in the sense that many of the girls have limited varsity experience,” Coach Weix commented. “I do anticipate our passing to be our strength this season … have to have some hitters step up and find ways to put the ball away on offense.”

Coach Weix believes Colfax will be the team for the Mounders to beat as the team contends for the Dunn-St. Croix conference title. “Colfax is going to be one of the better teams in the area and we may have one of the strongest regionals and sectionals out there,” said Weix.

The Mounders’ coach sees Colfax’s junior class as athletic and talented as well as the Vikings know how to win. “I’d put us right behind Colfax but anticipate many of the conference teams to be competitive this season.”

The Volleyball team will open their season with a game against Regis and Saint Croix Central on August 28 at 5 p.m. at Elk Mound high school. September 6 the team will square up against Ellsworth and Elmwood at 5 p.m.