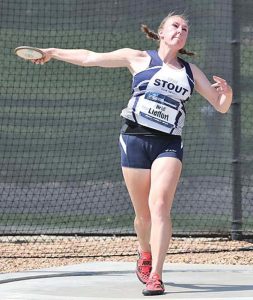 COLFAX NATIVE Hiedi Lieffort recently earned her second career All-America award for a second time while competing in the discus competition for UW-Stout during the NCAA Division III outdoor track and field championships this past May. —photo courtesy of the UW-Stout Athletic Department

Monique Newton of Oberlin College won the event with a distance of 164-6, edging out UW-Eau Claire’s Erica Oawster (162-7).

Stout’s Lydia Meier also competed in the discus, but fouled in all three events. Meier will compete in the hammer throw Saturday where she is seeded second.

Here are Heidi Lieffort’s accomplishments in her track and field career at UW-Stout and at Colfax High School:

Outdoor — earned All-America honors in the discus with an eighth place finish at NCAA Division III Outdoor Championship with a toss of 143-8; seeded fifth in the discus with a first-place throw of 160-0, set at the St. Mary’s Open; all-WIAC in javelin with second place mark of 117-3; finished third in discus at WIAC Championship with mark of 150-5; finished second at Phil Esten Challenge in javelin with mark of 113-1; best javelin mark of season was 118-7 at Willie Williams Classic.

Indoor — competed in the shot put, with a season-best throw of 31-3.25 at the St. Thomas Showcase. 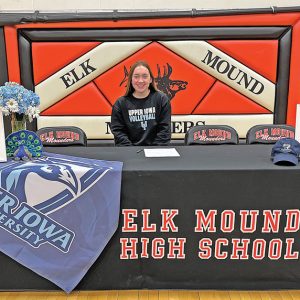 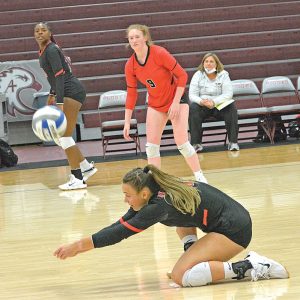