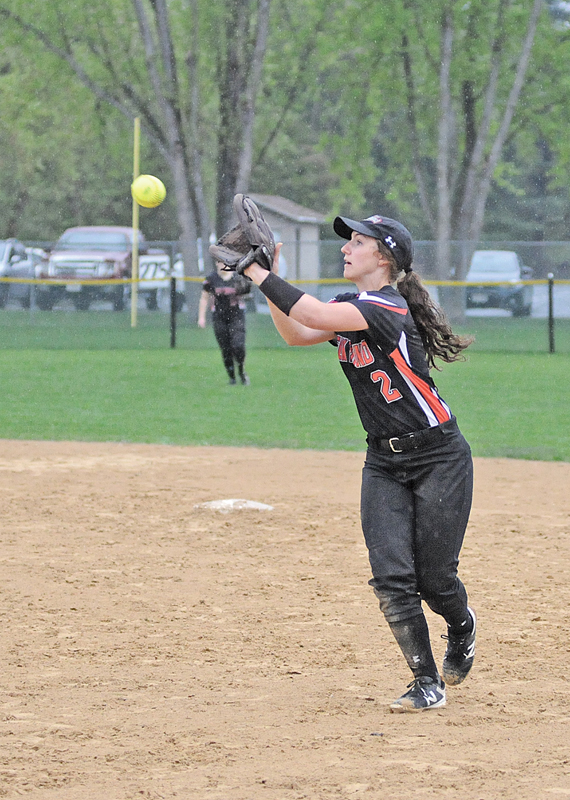 PREPARING TO CATCH this infield fly was Elk Mound second baseman Madysen Borofka during a Dunn-St. Croix softball game in Boyceville last Monday, May 14. The senior had a hit and an RBI in the Mounders’ 6-2 loss to the Bulldogs. —photo by Shawn DeWitt

The run stops at three.

Elk Mound’s dream of a fourth consecutive Dunn-St. Croix softball championship was washed away following a 6-2 loss to the Bulldogs at Boyceville’s Andy Pafko Memorial Park in a rainy Dunn-St. Croix contest last Monday, May 14.

Despite the heartbreaking defeat, the Lady Mounders quickly collected themselves and finished the regular and conference seasons with a pair of wins.

Just a day after the set back in Boyceville, Samantha Stelter’s crew packed up and took to the road again, traveling to Plum City for a conference game. Elk Mound scored a 12-3 win over the Blue Devils.

Two days later, the Mounders returned home for the conference and regular season final against a winless Spring Valley squad. Elk Mound again plated a dozen runs to take a 12-1 victory over the Cardinals in the Thursday, May 17 contest.

Elk Mound, who finished 7-2 and in a three-way tie for second place in the D-SC with Boyceville and Mondovi and is 11-3 overall, drew a number three seed in the WIAA Division 3 Cumberland softball sectional and will host #6 Durand in a regional semifinal game today (May 23). The winner will likely play second-seeded Altoona in the regional final on Friday, May 25. 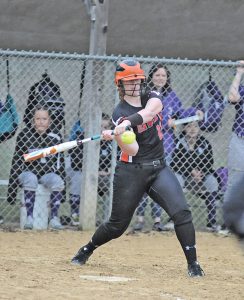 Elk Mound actually lead the game 2-0 after an inning and a half and finished with four more hits – 9 to 5 – than Boyceville.

But sophomore pitching ace Clare Hallum struggled with her control in the steady, drizzling rain at Pafko Park and surrendered an uncustomary seven walks in a 6-2 loss to Boyceville May 14.

The Bulldogs took advantage of several passed balls to score a run in the second and another in  third to tie the contest. Jaida Peterson then crunched a one-out, RBI double in the third to put Boyceville ahead to stay at 3-2.

Hallum gave up three hits and a pair of walks in the sixth, highlighted by the Bulldogs’ Kanako Nokomoto’s two-RBI single that helped Boyceville plate three more runs in the inning for the 6-2 seven-inning victory.

Hailey Blaskowski had a pair of doubles and scored a run and Allison Lindquist also had two hits – a double and single. Abby Curry and Crista Sweeney each belted two-baggers with Curry scoring the Mounders other run.

Hallum, who struck out three, suffered the loss while her Boyceville counterpart, fellow sophomore Tyra Kostman, got the mound win as she scattered the nine Elk Mound hits and did not allow a walk while striking out five.

The Lady Mounders collected nine hits and as many runs in their first two at bats for an quick 9-0 advantage after two innings of play.

The orange and black finished with 17 hits in all including four extra base hits and pitcher Clare Hallum scattered six Blue Devils’ hits and did not allow a walk while striking out nine in a 12-3 win on May 15.

Elk Mound scored four times in the opening inning and five more runs in the second. It added a pair of runs in the sixth and a run in the top of the seventh. Plum City scored once in the third and twice in the fifth.

Hailey Blaskowski went 4-for-4 at the plate for Elk Mound with a triple and scored four runs. Morgan Radtke and Madysen Borofka each tallied three hits in four at bats. Radtke had a double, scored a run and had an RBI while Borofka finished with three RBIs. Hallum, who tallied four RBIs, had two hits as did Sophie Cedarblade and Abby Curry.

The Cardinals managed to outhit the Mounders – 5 to 4 – when the Red Birds visited Elk Mound last Thursday, May 17 for the conference and season finale.

But Elk Mound really didn’t need to hit the ball as Spring Valley’s pitchers gave up a dozen walks including ten in the first inning alone which allowed the Mounders to score ten runs. The home team added two runs in the second to lead 12-0. Spring Valley  added its only run in the fourth to account for the 12-1 final in five innings.

Hailey Blaskowski continued to hit the ball well for the Mounders, finishing 2-for-2 batting with a pair of runs scored, two walks and an RBI. Amber Gilbertson also had a double for Elk Mound.

Hallum only threw two innings but got the win. She struck out three, walked one, surrendered two hits but no runs. Sophie Cedarblade relieved Hallum in the final three frames, giving up three hits and the Cardinals’ only run.