The Hilltopper baseball team won one while losing two this past week. The week started out on a sour note as the Toppers lost to rival Boyceville in the rain on Monday, May 14th (please see related article for details of the match up). The sun shone on the Hilltoppers as they defeated Plum City on Thursday, May 17th. They finished out the week with a loss to Clayton/Turtle Lake.

In only their second win of the season, the Hilltoppers defeated Elmwood/Plum City by a score of 7-5 in Elmwood.

The Toppers struck first with two runs in the second inning. Jacob Kopacz lead off the inning with a double and later scored. A short time later Gavin Janson scored off an RBI single from Peter Hill. After EPC went three and out in the bottom of the second, the Toppers came back with two more runs in the top of the third. With two outs, Tanner Davis singled. This brought up Kopacz who sent one over the fence to drive in Davis and himself.

After four innings EPC remained scoreless. The Hilltoppers then added one more run in the top of the fifth when Davis scored off of a sacrifice fly from Gavin Janson. EPC looked to challenge in the bottom half of the inning when they put up four runs, three of which came from a three run home run. The Toppers tightened their belts and controlled the damage by getting the next two batters out to end the inning.

The Toppers then added a couple of insurance runs at the top of the sixth when Hadin DeSmith and Carson Strong crossed the plate. They now had a 7-4 lead. EPC added one more in the bottom of the sixth but couldn’t come up with any runs in the seventh, giving the Toppers just their second win of the season.

Coach Shane Strong praised Kopacz’ pitching performance, stating “Jake Kopacz pitched a very good game. He had good command with his fast ball. We were able to hit the ball early to get him some runs to work with.” He also praised relief pitcher, Tanner Davis, remarking “Tanner Davis came in to get us out of a jam. He really showed toughness pitching through a tough situation.”

Strong further comments; “It was nice to pick up a conference win. Our kids have played in several close games this year, so to come out with a victory is encouraging for the future.”

Friday, May 18th the Toppers hosted Clayton/Turtle Lake (CTL) in a non-conference match up. Unfortunately the momentum from the previous night’s win didn’t carry over and they came up short losing 11-7.

CTL took an early 3-0 lead after one and a half innings. The Toppers shrunk that lead in the bottom of the second when Bryce Fayerweather and Gavin Janson scored thanks to RBIs from Jake Nadeau and Brad Kessler.

CTL wasn’t done though as they added four more runs before the Hilltoppers got on the board again in the bottom of the fifth with Peter Hill and Carson Strong scoring. The Toppers now trailed 4-7. Each team then added three runs in the sixth inning. CTL then put one more run on the board in the top of the seventh. Unfortunately the Toppers failed to score in the bottom half of the inning, stranding two runners.

The Hilltoppers played against Mondovi on Monday, May 21st. They take on Elk Mound in the first round of regional competition on Thursday the 24th in Elk Mound. 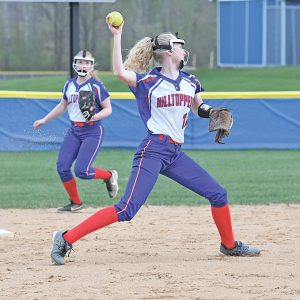