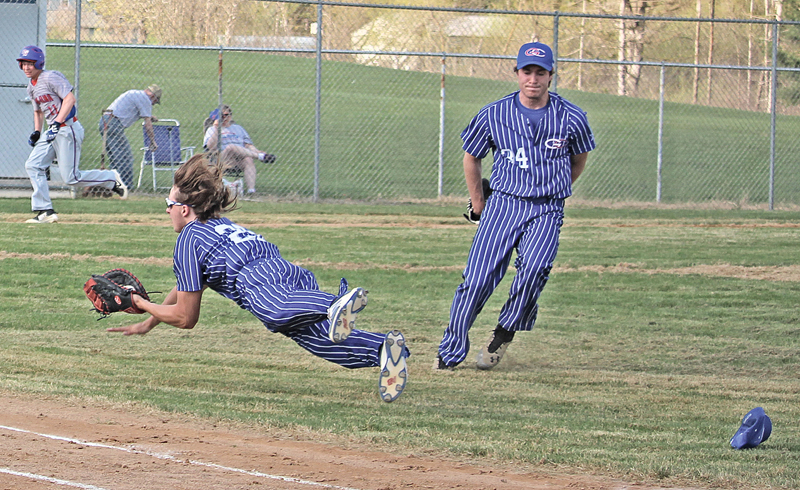 GLENWOOD CITY first baseman Tanner Davis made a dive catch during the Hilltoppers home baseball contest on May 7. —photo by Missy Klatt

GLENWOOD CITY – The Hilltopper baseball team continues to struggle this season as they lost two more games this past week. First to Pepin/Alma on Monday, May 7th and then to Durand on Friday, May 11th.

The Toppers played host to the Pepin/Alma Eagles on a beautiful spring afternoon. In the top of the third the Eagles were the first to score on some Topper errors. The Hilltoppers got things under control and were able to get out of the inning with no further damage with the Eagles stranding two on base.

Gavin Janson singled up the middle to get things started for the Toppers in the bottom half of the third. Dan Loring was then awarded first base. Marcus Hurtgen then singled, allowing Janson to score. Two consecutive passed balls then allowed Loring to score. Hayden DeSmith was walked but unfortunately Hurtgen was thrown out as he was trying to steal home. Bryce Fayerweather was then walked and it was time for a pitching change from the Eagles.

With runners at first and third, Jake Kopacz came to the plate. Fayerweather then stole second base to put the runners at second and third when Kopaz hit a long double to right field driving in two runs. Carson Strong then doubled up the middle driving in the last Hilltopper run.

At the end of three the Toppers had a 5-1 lead that was soon to start to unravel. The Eagles scored one run in the top of the fourth when their leadoff batter hit a homerun. The Eagles continued to pick away at the Toppers eventually winning the game 7-5. 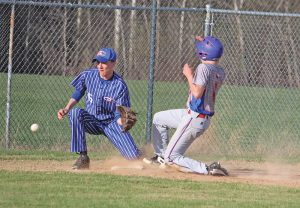 THE TOPPERS Hadin DeSmith (#5) has his eye on the baseball as a Pepin/Alma runner slide safely in to third during a May 7 Dunn-St. Croix game played in Glenwood City. —photo by Missy Klatt

On Friday the Toppers traveled to Durand where they lost 2-16 in a game that ended after the top of the fifth inning due to the ten run mercy rule.

GC Golfers have trip of a lifetime competing at state