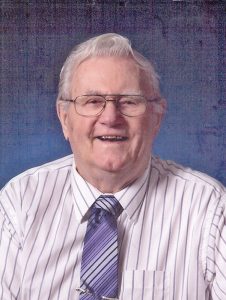 Walter Wallace Moskal was born on July 23, 1928 at home in the Town of Vance Creek, Clayton, WI, the son of John and Mary Moskal.

He was the oldest of four children. Walter, along with his siblings Eleanor, Tatina and William, grew up on a dairy farm in Vance Creek. He was baptized and served as an altar boy in the Russian Orthodox Church. Walter attended grades 1-8 at Jones Creek country school house. He was a proud graduate of Clayton High School; where he played basketball, football and baseball and made life-long friendships.

After graduation he joined the Army, serving as a Sergeant in Germany during the Korean War. Shortly after his return from the Army, he met his future wife, Carol Peterson. After several dates for dinner, movies and dancing, they were soon engaged. On November 9, 1956, Walter married his beloved Carol at Grace Lutheran Church in Clear Lake in a double ceremony with Carol’s sister, Virginia, and Wilburn Martin.

Together Walter and Carol made their home in Clear Lake, raising four daughters; Cynthia, Vicki, Lauri and Terri. He was a devoted husband and father.

Walter worked hauling milk for Ed Spurlock, later purchasing his own truck and milk route for Wisconsin Dairies. He enjoyed traveling the Wisconsin countryside in his milk truck and building relationships with the farmers and families on his route. A car ride wasn’t complete without him recounting the farms where he hauled milk. In 1978 Walter sold his business, going to work for the Town of Clear Lake as a patrolman; hauling gravel, grading roads and plowing show. During this time he purchased a herd of milking cows, renting the barn for several years from his neighbor, Russell Booth.

After his Carol’s death in 1991, Walter retired, moved from the family home he had built, and bought a cabin on Lake Magnor. He enjoyed fishing, hunting, bowling, golf, gardening and working on puzzles. The light of his life was spending time with many family members. He was delighted to become a grandfather to seven very special grandchildren. Each one brought him joy in so many different ways. Walter was their biggest fan; cheering loudly and enthusiastically from the bleachers at athletic events, watching them in the band, music concerts, Christmas programs, taking them fishing on his boat and hunting. Walter proudly and patiently taught them how to plant and tend the garden and how to can his famous garlic dill pickles. Each July he looked forward to the entire family vacationing up in Cornucopia, WI, where he spent many of his summers as a child. He led the grandkids on hikes to the waterfalls, took them blueberry picking and bear watching, and led singalongs to Burl Ives classics. He took his job as the vacation breakfast chef seriously, and made the very best blueberry pancakes. Walter never forgot the little things, and took pride in picking out the sweetest birthday cards and sending funny cards to the kids, just because.

With grandchildren grown up, Walter spent time with a special lady, Mary Sveda. They enjoyed going to different casinos and sharing their time. More blessings were added to his life with the arrival of seven great-grandchildren. He loved holding those babies, reading to them, doing puzzles with them, and was a great sport about attending their birthday parties and special events. With health issues a year and a half ago, Walter moved from his cabin to an apartment in Clear Lake. He celebrated his 90th birthday on July 23, and on August 27, 2018, he passed away peacefully at his home. Walter leaves a legacy as a man of quiet but unwavering faith, a devoted father and a loving grandfather and great-grandfather.

Posted in Bowling and Dartball, Obituaries