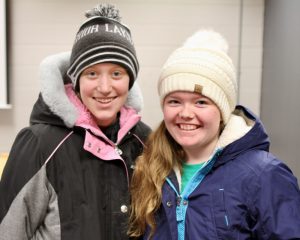 MIDDLE school students Karen Schaff (left)and Eleanor Farrell are prepared to brave the cold temperatures for the Geocaching event. They used a GPS device to find various locations and navigated themselves to a 1st place medal. —photo by Steve Duerst

BELLEVILLE – The Boyceville High School Science Olympiad opened the 2022-2023 season last weekend in Belleville for the first time since 2019 with a Division 2 tournament team championship in the high school tournament and a runner-up team finish in the middle school tournament. Boyceville High School narrowly held off Slinger and Belleville, who were 5th and 3rd places, respectively, at last year’s state tournament, while Boyceville Middle School finished ahead of Our Lady of Mount Carmel Academy, who was the fourth place middle school team at the Illinois State Tournament last season.

Gold medals were earned by juniors Parker Coombs and Caden Wold in Bridges and Robo Cross, Coombs and junior Becca Wyss in Detector Building, Wyss and junior Zach Kersten in Flight, sophomores Delaney Olson and Emily Fetzer in both Forensics and Horticulture, junior Peter Wheeldon and Wold in Its About Time, Wold and Wheeldon in Scrambler, sophomore Abigail Bauer and freshman Loralie West in WIFI Lab, juniors Cora Leslie and Hannah Dunn in Bridges, and juniors Alison McRoberts and Hannah Dunn in WIFI Lab.

Silver medals were earned by senior Dawson Standaert and junior Kylie Luedtke in Anatomy & Physiology, Coombs and Kersten in Trajectory, McRoberts and Dunn in Horticulture, and senior Kaianna Banyai and junior Treylin Thorson in Scrambler. 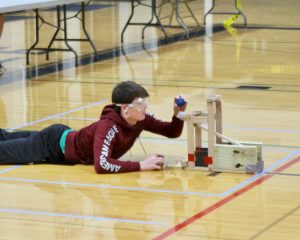 BOYCEVILLE’S Zach Kersten is doing his final preparations to launch his device in the Trajectory Event. He earned the 1st place spot in the Small School Division. —photo by Steve Duerst

Bronze medals were earned by Wheeldon and Kersten in Geocaching, Fetzer and Olson in Write It, Do It, and freshmen Jon Madison and Aiden Brown in Flight.

Fourth place medals were earned by Standaert and Luedtke in Cell Biology and freshman Cash Nielson and Brown in Bridges. 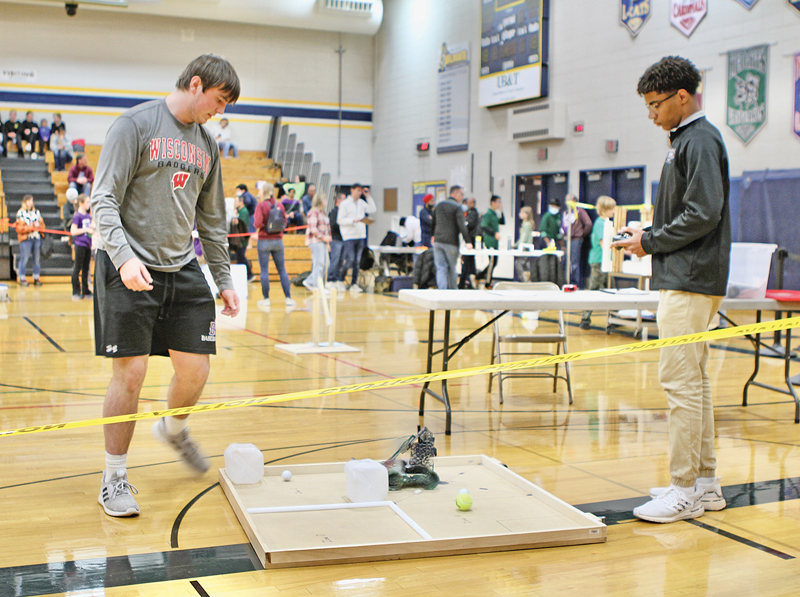 BOYCEVILLE Juniors Parker Coombs (left) and Caden Wold are shown using a hand built robotic vehicle to move the many objects on the board. The pair maneuvered their way to 1st place. —photo by Steve Duerst

Fourth place medals were earned by Rasmussen and E. Farrell in Crave the Wave, eighth grader Ava Dormanen and E. Farrell in Road Scholar, Hafermann and Engel in Rocks & Minerals, Holden and Hellendrung in Virology, and seventh graders Arnold Sudbrink and Tim Jackson in Storm the Castle.

Fifth place medals were earned by Engel and Rasmussen in both Fast Facts and Meteorology, Holden, S. Stoveren, and Hellendrung in Picture This, seventh graders Eli Cole and Eli Weber in Bridges, seventh grader Ivan Farrell and Weber in Flight, and Jackson and seventh grader Vance Olson in Wheeled Vehicle.

“It is very challenging getting ready for a tournament this early in the season, but our students did outstanding” said head coach Andy Hamm. “The foundation that the team has placed by preparing for and doing well at such an early tournament will provide more opportunities for success down the road this season, and we are all really excited to see where our teams can stack up in the state this year. We are very young in both the middle and high school divisions and it is exciting to see so many new students step up and find success early in the season”

Boyceville will next be in action at their 16th Annual Boyceville Invitational home tournament next month, followed by invitational tournaments at Medford and UW-River Falls in January. Boyceville Science Olympiad is coached by Andy Hamm, Russ Riehbrandt, and Steve Duerst.