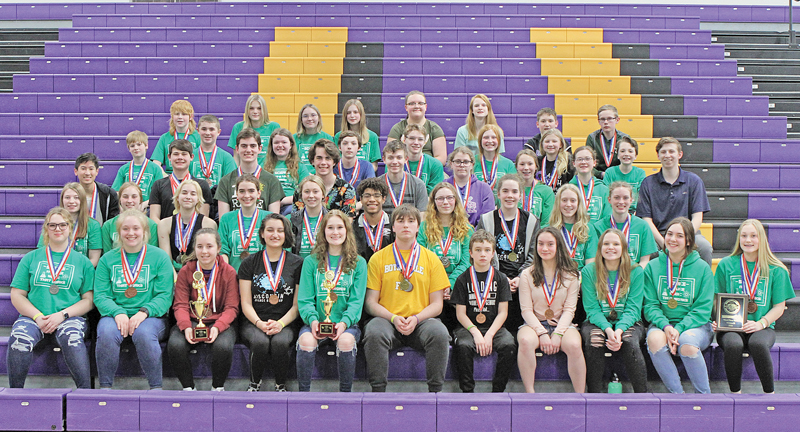 THE BOYCEVILLE High School and Middle School teams capped a successful season by finishing fourth in the high school level and third in the middle level at the Wisconsin Science Olympiad State Tournament held this past Saturday, April 23 at UW-Stevens Point. Schools are not separated by size, so small to large schools compete head-to-head. The high school and middle school level teams from Boyceville competed in 23 STEM events each and both medaled in 20 of 23 events. The junior varsity teams were also allowed to participate in this tournament. Most of the Bulldog students earned at least one medal at State. —photo by Steve Duerst

STEVENS POINT – Boyceville Middle School earned medals in 20 of the 23  scored events and six state championship gold medals on their way to the state third place trophy, scoring a near record low 81 points over all 23 events.  Boyceville High School’s Science Olympiad team earned medals in 16 out of 23 events at the state tournament on their way to a fourth place overall finish, marking the team’s 13th consecutive top four finish at the state tournament, taking over the second-longest active streak of consecutive top four team finishes, behind only Menomonie (16). 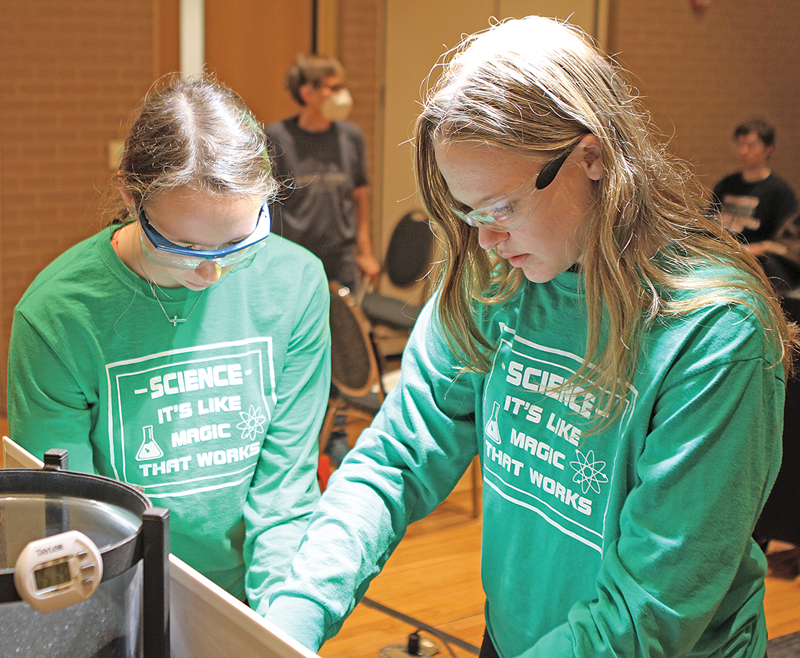 BOYCEVILLE Middle School students Chelsi Holden (left) and Zoey Hellendrung (right) competed in the Bridge event at State. Their bridge weighed about 8 grams and held over 15,000 grams. The duo won the gold as they bested other schools by hundreds of points. —photo by Steve Duerst

Bronze medals were earned by Wyss and Coombs in Detector Building, seniors Libby Bygd, Ali Ruhnke, and Ella Holden in Experimental Design, senior Shiloh Wheeldon and Wyss in Forensics, P. Wheeldon and Wold in Gravity Vehicle, Levi Becker and Schaff in Sounds of Music, Fetzer and Olson in Write It, Do It, sixth grader Tim Jackson and Sudbrink in Storm the Castle (JV), and sixth graders Eli Weber and Eli Cole in Bridges (JV).

Fourth place medals were earned by senior Elliona Staves and S. Wheeldon in Disease Detectives, Ruhnke and Bygd in Horticulture, Luke Becker and P. Wheeldon in Its About Time, seniors Madison Andrews and Lacota Brown in both Bridges (JV) and Wright Stuff (JV), Lauren Becker and Olson in Disease Detectives, Lauren Becker and Engel in Rocks & Minerals, and eighth grader Aiden Brown in both Bridges (JV) and Electric Wright Stuff (JV).

Sixth place medals were earned by Luedtke and Luke Becker in Astronomy, Peter Wheeldon and Kersten in Geocaching, eighth grader Anna Hafermann and Lauren Becker in Bio-Process Lab, and C. Holden and Hellendrung in Virology.

“Our students have worked so hard and had such determination to succeed, and it was so exciting to get back to having an in-person state tournament with all of the excitement.” said Boyceville Head Coach Andy Hamm.  “I am so happy for our seniors to get one final in-person state tournament for the first time in three years and their hard work all year paid off tremendously.  This was a great end to an exciting season!”

Boyceville High School Class of 2022 awarded more than $436,000 in Scholarship and Academic Awards