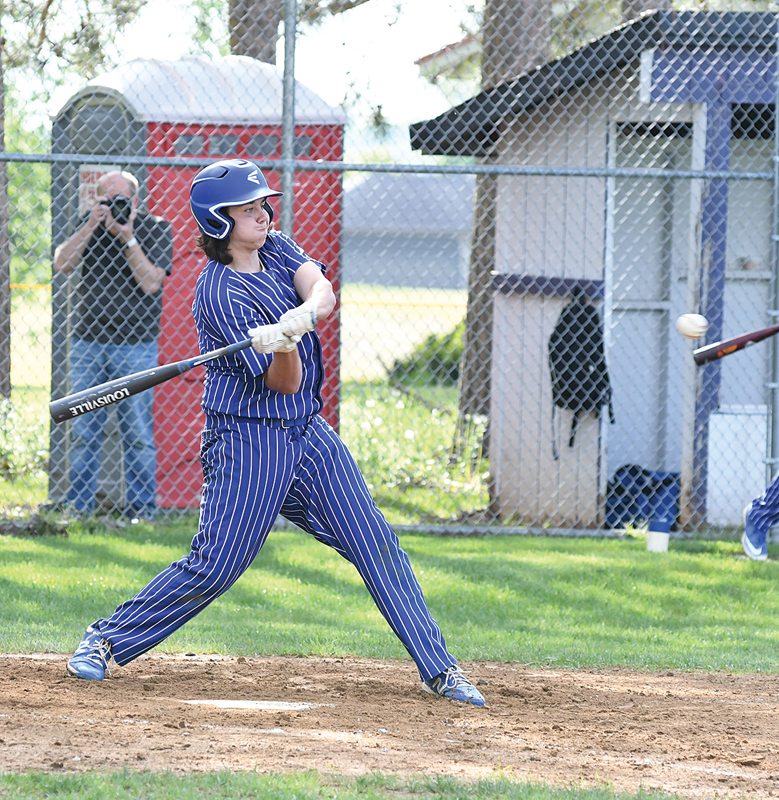 BIG BAT — The Toppers’ Aaron Brigham hit this pitch for a double during a May 24 baseball contest in Boyceville. Brigham also hit another double and had an RBI in Glenwood City’s 12-2 loss to Boyceville.
—photo by Shawn DeWitt

Although the Glenwood City baseball team was unable to get its second victory of the season last week, it did show marked improvement.

After being blown off the diamond in their first go-rounds with both Boyceville (21-4) and Colfax (21-1), the Hilltoppers played much better in their second contests with those squads.

At the home of the unbeaten and top-ranked Bulldogs, Glenwood City lost just 12-2 last Monday, May 24 and then went to Colfax the following day where they lost a heartbreaking 3-0 decision to the Vikings.

Despite the most recent losses, Glenwood City (0-10 and 1-10) should take some confidence into a busy final week of the regular season. The Toppers opened June in Durand Tuesday and will then go to Elk Mound on Friday before returning home to host Mondovi in what may be the final regular-season and conference contest next Monday, June 7. Last Thursday’s home game against Elmwood/Plum City was cancelled due to rain and no date for a make-up has been posted.

If you are going to defeat unbeaten Boyceville, the top-ranked team in the Wisconsin Baseball Coaches’ Division 4 state poll, you have to hit the ball, score runs and play flawless defense.

Glenwood City managed just one of the three which was not enough to take down the mighty Dogs.

Glenwood City trailed 6-0 heading into the top of the third when they finally broke onto the scoreboard with a single run. Noah Brite reach on an error, the Bulldogs only one of the contest, to open the inning. He advanced when Gavin Janson followed him with a single and scored on Aaron Brigham’s double that hit off the bottom of the center-field fence.

Boyceville took the run back in their half of the third to lead by six runs once again, 7-1.

The Hilltoppers added its second and final score in the fourth. Steven Booth reached to open the frame after being plunked by a Helland pitch and scored after singles by Jayden Quinn and Max Janson.

Unfortunately, the Bulldogs dropped the game to an early conclusion when they scored five runs in the bottom of the fifth frame highlighted by a two-run homer from Jacob Granley.

Brigham finished with a pair of doubles in three plate appearances to lead the Toppers and had an RBI. Brady McCarthy had a double while Max and Gavin Janson, Steven Booth, and Nelson Polan each had singles.

Gavin Janson started and went four innings on the mound to absorb the loss after surrendering eight hits including two home runs while walking a pair and striking out two. Brite relieved him in the fifth and gave up three runs on three hits and two walks in just a third of an inning.

The Vikings’ Drew Gibson and Jamison Flatland combined to hold Glenwood City scoreless when the Toppers visited last Tuesday, May 25.

Flatland came in for the final inning and a third and did not allow a hit and struck out three.

The Vikings scored two runs in the first inning and added its final score in the fifth.

Glenwood City’s only scoring threat came in the top of the fourth when Max Janson singled to open the frame and his older brother Gavin walked. The pair moved to second and third bases on a passed ball but were stranded there when Gibson struck out Aaron Brigham, and Steven and Brendan Booth to end the Toppers’ inning.

Max Janson had two of the Toppers four hits with Gavin Janson and Brady McCarthy getting the other two.

Max Janson threw all six innings for Glenwood City giving up only seven hits and all three runs with two strike outs and a pair of free passes.

Summer heat can be dangerous; know the signs and how to be safe