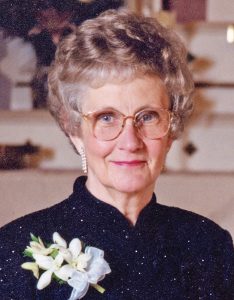 Genevieve (Penny) E. Noer, 91, passed away peacefully on Tuesday, February 16, 2021, at Colfax Health and Rehabilitation Center, Colfax, WI. Penny was born on January 28, 1930, in Eau Claire, Wisconsin, the youngest daughter of August and Edna Erickson. She was raised with her four siblings on the family farm in Otter Creek, WI. She graduated from Colfax High School in 1947 as the class Valedictorian. After graduation, Penny moved to Minneapolis, MN, where she worked for Northwest Airlines.

Penny married Juul Hovre Noer on August 18, 1950, at Colfax Lutheran Church, and they moved to Madison, WI, where Juul attended pharmacy school. Juul was recalled to active duty as a Navy Corpsman during the Korean Conflict, during which time Penny worked at Noer’s Drug Store and lived with Juul’s parents, Victor and Selma Noer. After Juul’s release from the military, they went back to Madison. Penny worked for Ray-o-Vac and Juul completed his Pharmacy Degree in 1955.

They returned to Colfax and Juul began working with his father at Noer’s Drug Store. They lived in an apartment above the Drug Store where Penny raised the first three of their four children. It was sometimes quite a challenge for her to go up and down the big outdoor staircase, often carrying two children. After just a couple of years, Penny and Juul purchased the Drug Store and became the third generation of Noers to serve the community of Colfax. In 1960 they built the family home next to Juul’s parents. After all four children were old enough for school, Penny went to work at the Drug Store as the office manager, working alongside Juul until their retirement in 1990.

Penny is remembered for her love of baking and cooking. Her family still treasures her favorites: divinity, donuts, buns, meatballs, and Norwegian cookies at Christmas. She was also an accomplished seamstress, sewing many outfits for her children that are remembered in great family photographs. Penny and Juul were avid Green Bay Packer fans, enjoying lots of fun attending games including three Super Bowl games. They held season tickets for over 50 years, which have been passed on to their children.

Penny was very giving of her time and talents. She was a lifelong member of Colfax Lutheran Church, spent many years in the Altar Guild and volunteered for everything she could to help the church she loved. She was an active member of the Colfax American Legion Auxiliary and enjoyed marching in the annual Memorial Day Parade with her two sisters. For over 40 years Penny was the coordinator for the American Red Cross Blood Drives in Colfax.

Penny is survived by her oldest sister, JaVerna Morrill of Menomonie, WI; her four children, Julie (Gerard) Resch of Greenville, WI; Dr. Beth (Rodney) Fierek of Stillwater, MN; Kurt of Appleton, WI; and Nancy (Kent) Anderson of Boyceville, WI; nine grandchildren; and eight great-grandchildren. She was preceded in death by her parents; her husband, Juul; her brothers Alvin and David Erickson; her sister Vergene Viets; and her lifelong dear friend, Phyllis Williams.

Our family is deeply grateful to Colfax Health and Rehabilitation Center and Heartland Hospice for everyone’s compassionate care and devotion to our mother’s needs and comfort. It was such a blessing that Penny was able to continue to live in her home town of Colfax, which she loved so dearly.

A funeral will be held this Spring at Colfax Lutheran Church with burial at Colfax Evergreen Cemetery.

Memorials may be donated to Colfax Lutheran Church

Cremation Society of Wisconsin is serving the family.