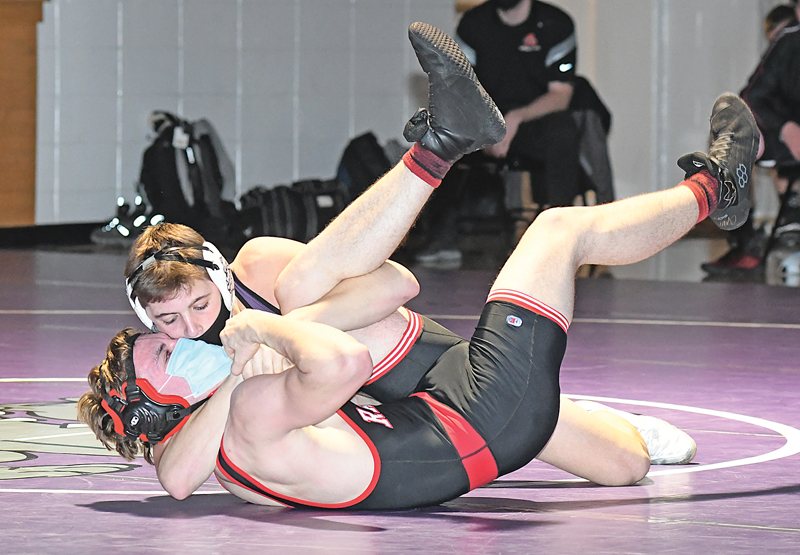 THE SQUEEZE — The Bulldogs’ Ira Bialzik has his Arcadia opponent in a cradle during a match at 160 pounds. Bialzik scored the pin at 1:26 as Boyceville went on to defeat Arcadia 57-18 in the January 5 dual hosted by the Bulldogs. —photo by Shawn DeWitt

BOYCEVILLE — Any notion that the visiting Raiders of Arcadia had of upsetting Boyceville on the wrestling mat was quickly dispelled in last Tuesday’s non-conference dual.

The Bulldogs, currently ranked as a Division 3 honorable mention in the most recent WiWrestling.com online coaches poll, opened the competition with three straight pins, a one-point decision, a forfeit and another pin to take themselves to an early 33-0 advantage and never look back en route to a 57-18 shellacking of the Raiders in Boyceville’s gymatorium January 5.

With the victory, Boyceville improved to 3-1 on the season.

Boyceville’s Peyton Ponath set the dual with a quick first period pin at 152 pounds. The junior put Arcadia’s Esau Vallejo to the mat just a minute and seven seconds into the dual’s opening match.

Classmates Ira Bialzik and Tyler Dormanen then scored back-to-back pins in their respective matches at 160 and 170 pounds for a quick 18-0 Bulldogs’ lead.

Yet another member of Boyceville’s junior class delivered a decisive win as Kyle Lipke nipped the Raiders’ Joseph Nelson, 7-6, at 182 pounds.

“We started the dual at 152 where Peyton Ponath got a big pin,” stated Boyceville head coach Jamie Olson. “ Ira Bialzik and Tyler Dormanen followed suit with pins and Kyle Lipke at 182 won an exciting 7-6 come-from-behind victory that put us up 21-0.”

And the Bulldogs were not done!

Senior and top-ranked Trett Joles took a forfeit at 195 pounds and junior John Klefstad scored the quickest pin of the evening – a 30-second fall over Gage Instenes – at 220 pounds to up the home squad’s lead to 33-0.

Arcadia finally got on the scoreboard with six points when its heavyweight, Jack Ziegeweld, turned the tables on previously unbeaten Plemon Keegan and earned the pin just a minute in the 285-pound bout.

“Keegan Plemon made a mistake and it cost him at heavyweight,” stated Olson. “I believe we were better than that kid, but we got out of position and it cost us. Keegan is having a great year and was undefeated going into that match. Sometimes a loss at this time of the year is ok, we learn from the mistake and get better.”

Boyceville picked up its fifth pin of the dual when Noah Evenson stuck fellow freshman Walker Slaby just 34 ticks into the match at 106 pounds.

“Noah Evenson got us back on track with a first-period pin,” noted Olson. “Noah is wrestling with confidence and is having a fine season.”

Arcadia scored just its second victory of the evening at 113 pounds where Brady Mast fell victim to a first-period pin by the Raiders’ Hunter Fitzpatrick.

Bryce Evenson put the Bulldogs back in the win column with a 3:03 fall at 120 pounds.

Sophomore Emma Gruenhagen bolted to a 7-0 lead in her 126-pound battle with Nestor Badillo of Arcadia. Gruenhagen led 12-5 after two and then scored a reversal to open the final stanza which led to her pinning Badillo at 5:18 for a 52-12 Bulldogs’ lead.

“Another exciting match at 126, where Emma Gruenhagen went up big, then found herself in trouble and yet battled back into position to get a late pin and put us up big,” Olson stated.

In the final match of the dual, senior Nate Stuart, ranked 10th, returned to the wrestling mat to score a late, third period fall at 145 to account for the 57-18 final tally.

“I’m very happy with where we’re at right now,” stated Olson. “This has been a great group of kids to work with.”

Boyceville returns to action this Thursday, January 14, for a quadrangular meet in Durand. The Bulldogs will face off against the host Panthers (the dual will count toward the D-SC standings), Bloomer/Colfax, and Ladysmith.