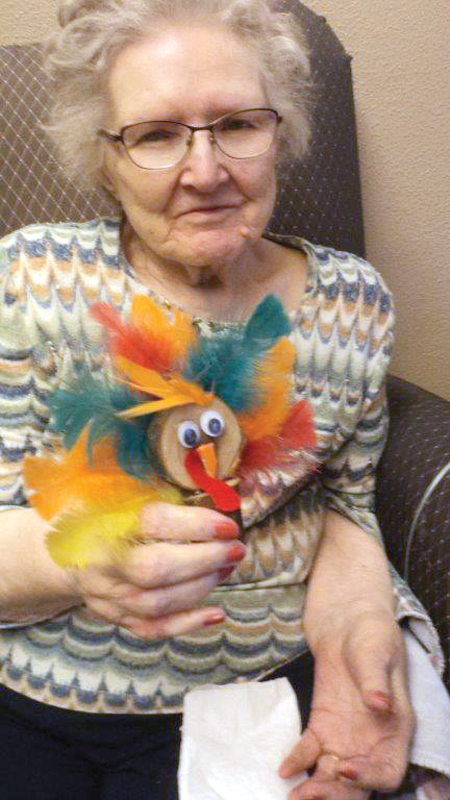 Monday proved to not be too bad outside. We did some more cleanup both inside and outside. Several of the pumpkins have gotten frozen, so they are becoming a mess. We put many of those that were still in good shape out for the deer, hoping they will get close enough to the building for the residents to watch. One family member told me that the deer eat them better when they have been frozen, as it softens them up. I hope they’re right, as we had quite a few that did just that! I know that cows will eat them, frozen or not. One of our staff also took a couple home for her chickens. Apparently there are a lot of animals who like pumpkin!

Church day was on Tuesday, and Pastor Jonathan had a new Bible Study for residents to listen to, and we also put church services on for whoever wished to watch them. Pastor Dahm for Forest Immanuel Lutheran gave us a call this week to let us know that his services are also being shown on Youtube, so will check that out this next week.

Carol also did some more crafts in their rooms, to be used in their cubbies just outside their doors. We are working on Christmas trees, snowflakes, etc. Residents also tried their hand at some ornaments for their trees. They’re little snow globes, and we plan on putting their names on to be hung in each household’s tree. This week we also made Thanksgiving turkeys out of slices of wood and feathers, with big googly eyes. They turned out quite cute.

We haven’t started the gnomes yet, but that will be soon, as Christmas is coming quickly.

Beauty shop was done in their rooms on Tuesday and some on Wednesday. Ladies also had their nails polished. As I told one family member, they are all fixed up, but no place to go! They all feel good about looking nice and getting their hair and nails done.

Exercises were done on Thursday morning, and care conferences via telephone were held in the afternoon. It’s always good to touch base with the families, especially at this time. We do our best to keep everyone updated as to what is going on.

Popcorn was enjoyed on Friday, and some more turkeys were made in the afternoon. Now that Havenwood can get together as a group, with social distancing, we will get some craft projects down their way, too.

We had an afternoon snack of orange floats, as we had some orange soda left from Halloween. Anything with ice cream is always a hit around here.

We also have a group of third graders from the Willow River Elementary in Hudson, who are going to be  sending residents Thanksgiving letters from their class. They do something of this sort every year as a community service project. Their teacher said the kids are very excited about it, and I’m sure the residents will love it, also.

There will be no Thanksgiving meals with families this year, which I’m sure everyone was expecting, as we can’t have visitors in the building. Be assured that the residents will get a great meal.

Thanks for reading, and stay well.

Spring Valley Stagehands produce A Candle in the Window