STEVENS POINT, Wis. – The Wisconsin Interscholastic Athletic Association Board of Control will discuss the membership’s options for the remainder of the spring sports seasons and for summertime regulations at its scheduled meeting on April 21 via video conferencing.

Gov. Tony Evers extended the state’s Safer-at-Home order until May 26, 2020, and ordered all public and private K-12 schools to remain closed and interscholastic athletics are prohibited for the remainder of the 2019-2020 school year in an announcement made today.

In accordance with Gov. Evers’ new directive, all interscholastic training, practices, scrimmages and contests remain suspended. The WIAA postponed all athletic participation following an executive order issued by the governor on Friday, March 13 that closed all public and private schools on March 18.

The Executive Staff has discussed the best and worst case scenarios with the possibility schools may close for the remainder of the school year. Those will be reviewed with guidance from the Board of Control to determine the best course of action.

Last week, the University of Wisconsin-Madison announced it extended the cancellation of campus events through June 30, 2020, which eliminates the possibility of conducting the WIAA State Tournaments scheduled at campus venues this spring. Those events impacted were Boys Individual and Team Tennis Tournaments scheduled at Nielsen Tennis Stadium on June 4-6 and June 12-13, respectively; the State Boys Golf Championship at University Ridge on June 15-16; and the State Softball Tournament at Goodman Diamond on June 11-13.

The Stay at Home order and the closure of schools are in response to the information available regarding COVID-19 and efforts to prevent the spread of the disease.

The WIAA, as defined by its Constitution, is a voluntary, unincorporated, and nonprofit organization. The membership oversees interscholastic athletic programs for 513 senior high schools and 46 junior high/middle level schools in its membership. It sponsors State Championship Tournament Series for boys and girls. 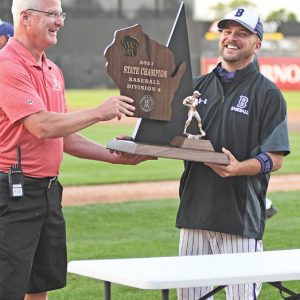