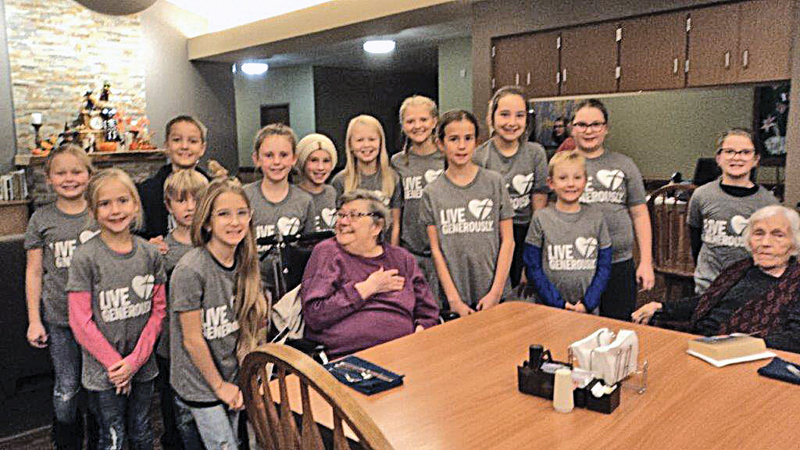 Movies from the library were enjoyed by the residents on Saturday. This week they enjoyed “The Philadelphia Story” and in honor of Halloween, “Mystery Classics”, which featured Sherlock Holmes and Mr. Moto, just to name a few.

Sunday was a busy day with Catholic communion in the morning, church with Christ the King in the afternoon, and the Menonite Singers in the evening. It’s nice to have our volunteers to help fill in the weekends. Thank You!

Monday was Columbus Day, and we started the day off with exercises, which was followed in the afternoon by Christopher Columbus trivia. There are several residents who really enjoy our trivia sessions.

Residents made some cute pumpkin faces on Tuesday at craft time. In the afternoon we tried ping pong, which we occasionally do, but it didn’t go so well, so decided to end the afternoon with a couple of games of Uno. Coffee was enjoyed by all after the card game.

Bingo on Wednesday was hosted by the activity department this week, with the assistance of Sue Nelson. We couldn’t have managed without Suzie! Following Bingo, the JAM (Jesus and Music) kids from Holy Cross came and entertained the residents by doing some singing and reading. They sounded great.

The Little Acorns were up to visit on Thursday, and this week they played basketball with the residents. It sounds like they had a lot of fun. This was followed by manicures.

In the evening, a very nice crowd gathered in the lobby for the annual Oktoberfest. The kitchen prepared some awesome German food, which included spaetzle, sauerkraut and sausage, chicken schnitzel, a cucumber salad, pickled beets from our garden, and German chocolate cake for dessert. Attendees also got to sample various beers and wines, and we had a silent auction with many, many items, and buckets to put tickets in for drawings. It was a good time. Thanks to all who helped organize, donated to and attended the event! Proceeds are going to help finish off the community room.

Friday was popcorn day, and flu shot day for residents and staff. A game of 500 was played in the afternoon, and coffee was enjoyed afterward.

Upcoming events: 22-Boyceville Methodist Church; 27-Grace Baptist church; 29-Jane & Friends Monthly birthday party; 30-Bingo with St. John’s; 31-Halloween Party in the afternoon and Trick or Treaters welcome from 4-5:30. Glenhaven will provide candy for the residents to pass out, but families are welcome to bring some in if they wish. Please remember no pets allowed at Trick-or-Treating. Visitors are welcome to come and see our scarecrows and vote for your favorite for the entire month of October.