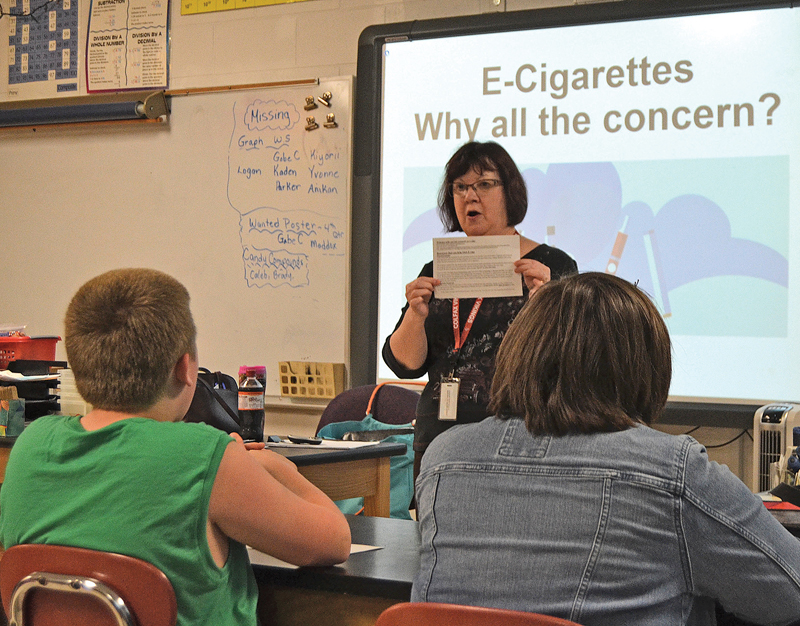 E-CIGS — Kathy Asper, Manager of Prevention Services with Arbor Place out of Menomonie, spent two days the week of May 13 doing presentations for Colfax High School and Colfax Middle School students on dangers of e-cigarettes and “vaping.” —photo by LeAnn R. Ralph

COLFAX  —  Do you know what e-cigs are — or vaping? How about Juuling?

E-cigs or e-cigarettes, vaping and Juuling all refer to the same activity — inhaling a vapor with nicotine  in it.

Kathy Asper, Manager of Prevention Services with Arbor Place Inc. out of Menomonie, spent two days in the Colfax school district the week of May 13 speaking to middle school and high school students about vaping.

The Colfax Messenger sat in on one presentation in sixth grade in Linda Bilodeau’s class.

“Juul” is actually the brand name of one kind of e-cigarette. “Juuling” is inhaling the nicotine vapor from a device that looks something like a long flash drive, also known as a thumb drive.

One “pod” of the liquid used in an e-cigarette or a Juul device is equal to one pack of cigarettes, Asper said.

Sometimes inhaling the vapor from an e-cigarette is referred to as “smoking” although it is not technically smoking because there is no combustion taking place.

“Vaping is very addictive … Nicotine, research has shown, is as hard to quit as quitting heroin,” Asper said.

Asper told the students she hoped they would pick out one or two useful pieces of information to retain. Even if the students never try vaping themselves, chances are they will have friends or family members who do, she said.

When asked if they knew someone who smokes cigarettes or who had tried to stop, many of the students in the classroom raised their hands.

“This is probably what it will look like one day with vaping,” she said.

E-cigarettes have been on the market since 2001 and were originally developed to help people stop smoking, Asper said.

People started using the e-cigs to help them stop smoking, but then researchers realized it didn’t work, she said.

When asked what they had heard about vaping, the students offered many answers that Asper said showed they knew quite a bit about vaping already.

Some of the answers included:

• Vaping can help you stop smoking.

• Vaping can cause lung cancer.

• You can end up in the hospital from using e-cigarettes [if you use too much].

• You might need an inhaler because vaping can cause lung damage.

• You may need lung treatments if you vape.

• Vaping can lead you down the wrong path in life.

When asked why kids might want to try vaping, the students’ answers included:

• They want to try the different flavors.

• They want to be popular with other students or because of peer pressure.

• They are curious to find out what it’s like.

When asked why people might think vaping or using e-cigarettes is safe, the students also offered several answers, including:

• A friend may have told them vaping is not dangerous.

• The vaping pod is “a tiny little thing” so it doesn’t look like it would be dangerous.

Asper cautioned students to never share a vaping device with someone else.

People do not know what is in the vaping liquid because the manufacturers do not have to list the ingredients, Asper said.

By 2022, manufacturers will have to list what is in the vaping liquid, she said.

People think e-cigarettes are safer than cigarettes because there is a battery pack and you do not use a match or a lighter, Asper said.

But the battery heats up and “explodes” the liquid, and some battery packs have exploded and caused clothing to catch on fire, she said.

E-cigarettes also include toxic substances in the liquid and the vapor, Asper said.

When the “explosion” occurs to create the vapor, there are microscopic pieces of debris, little pieces of plastic, metal and lead from the e-cigarette.

“Microfine particles are getting deep into your lungs,” Asper said.

The flavorings used in e-cigs can also cause lung damage. One of the chemicals used in the flavoring, called diacetyl, causes bronchiolitis obliterans, or what is more commonly known as “popcorn lung,” she said.

When Asper first heard of popcorn lung, she said she was thinking that perhaps the lungs looked like popcorn, somehow.

The condition was named when workers in factories that made butter-flavored microwave popcorn developed the lung disease and were suffering from more lung infections, she said.

If someone is vaping and is coughing or becoming ill more often with lung infections, it could be popcorn lung, and that person should go to a doctor for treatment, because if it is treated early, the condition can improve, Asper said.

Of those who vape, 95 percent of those surveyed said if it was not for the flavors, they would not be vaping, Asper said.

The e-cigarette industry works hard to come up with new and better names for the flavors, which can include anything from fruit to bubblegum to mint.

Some of the more unusual names for flavors that Asper said she has always wondered about include “Zombie Blood,” “Skinny Menthol,” and “Swamp Frog.”

Some of the names for the vaping liquid violate trademarks, such as Nilla Vapers or flavors that supposedly taste like popular cereals children like, such as Froot Loops or Lucky Charms.

While no deaths have occurred from vaping itself, the liquid has caused deaths, Asper said.

The first death was in 2014 after a two-year-old child drank some apple-flavored vaping liquid, she said.

“If you know someone who is vaping who has small children, don’t go and yell at them. Instead, ask them if they could put it someplace safe [so the children do not get a hold of the vaping liquid,]” Asper said.

Many countries require the vaping liquid to be in childproof containers, but that has not yet happened in the United States, she noted.

Asper asked the students what they could do with $1,500.

Their answers were admirably practical:

• Use it to help our family.

• Put it toward four-wheelers or go-carts.

• Give it to the homeless.

“This is a really good group of kids,” Asper said to their teacher.

Asper provided a handout to the students with links to websites devoted to research information or information on quitting e-cigarettes.

The Wisconsin Tobacco Quit Line is a free service to help people quit smoking, vaping or other tobacco use. Call 800-QUIT-NOW or 800-784-8669.