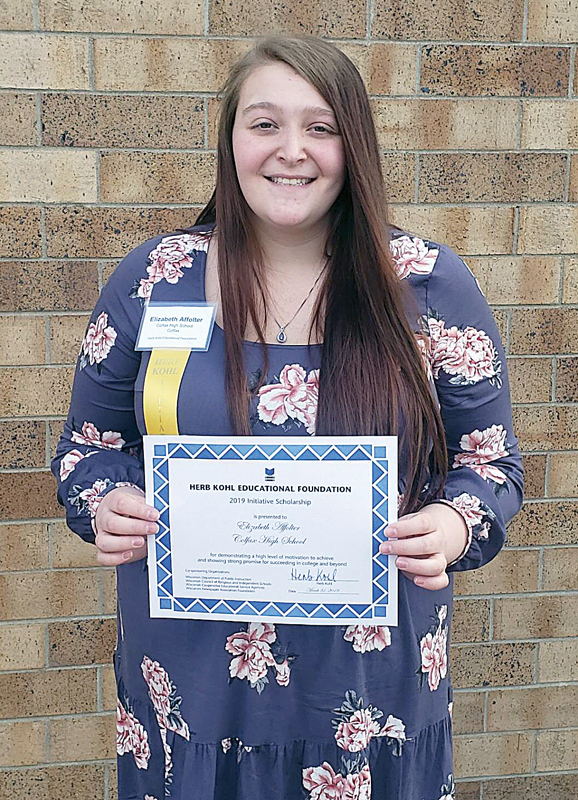 Elizabeth is the daughter of Teri Smith and Mike Smith.

Elizabeth says John Dachel, Colfax High School principal, handed her a list of questions to answer and said it was for a scholarship, “but he didn’t tell me much, just that the scholarship … usually gives out a lot of good scholarships.”

“It is such an honor to be selected for the Herb Kohl Student Initiative Scholarship. I have never imagined that I would be the one that would be chosen for the scholarship,” she said.

Elizabeth plans to attend UW-Stevens Point and will major in Special Education.

Elizabeth has two brothers, an older brother, Daniel, who is 20, and a younger brother, Chance, who is 13 years old. She also has a six month old niece named Brilee.

In her free, time, she likes to hang out with her family, and she also likes to go swimming and loves to watch her niece and take her places.

Award recipients were notified of their awards on March 4.

Elizabeth Affolter was among the honorees at a luncheon held at Chippewa Falls Middle School March 31 at which recipients from CESAs 4, 9, 10, 11 and 12 were honored.

The Kohl Foundation Scholarship and Fellowship program was established by Herb Kohl, philanthropist and businessman, in 1990. To date the foundation has awarded $17.8 million to Wisconsin educators, principals, students, and schools.