The Bulldogs’ season hasn’t started out quite like they had hoped as they dropped a trio of matches last week and saw their record fall to 4-9 including a 0-1 start in Dunn-St. Croix Conference play.

Boyceville hosted a triangular against Cumberland and Webster last Monday, September 10 and lost both matches which was followed by a road loss in straight sets to Spring Valley in the conference opener on Thursday, September 13.

With a week to practice and rest up, the Bulldogs headed to Colfax last evening (Tuesday, September 18) for a conference tussle against the 5-time defending D-SC champion Vikings.

Boyceville returns home tomorrow night (Thursday) for another tough conference match up against the Elk Mound Mounders and will close out the week Saturday at the Cameron Invitational. The Bulldogs will travel to Elmwood to take on the Raiders next Tuesday, September 25.

The Boyceville Bulldogs hosted a triangular September 10 losing to Cumberland 2-1 and to Webster in two straight sets.

According to head coach Keri Peterson losing four of the five games by two points was disappointing for the Bulldogs.

“We didn’t give up easily, but we have to be able to focus mentally and perform at a high level when the pressures on and we want to win,” commented Peterson.

During the match against Cumberland, Boyceville had shown improvements from the service line according to coach Peterson, earning six aces and eliminating errors that had plagued the Lady Bulldogs in recent weeks.

Jaida Peterson led the team in kills earning seven with zero hitting errors, Hannah Johnson tacked on five more and Taylor Grambow contributed four more before leaving the match with a knee injury side lining her the rest of the evening.

The first set against Cumberland was a back and fourth effort as the Bulldogs attempted to put an end to the set only to fall 28-30. The match up went the full distance of three sets with the Bulldogs winning set two 28-26 and losing set three 9-15.

“An injury to starting middle hitter, Taylor Grambow, in the second set was a blow to our team … she (Grambow) has been a starter for two years and is one of our kill leaders, as well as a presence at the net for us,” Peterson stated.

Boyceville then turned their attention to Webster trying to regroup after the loss of their middle hitter but to no avail. The Bulldogs pushed the Tigers to extra points only to lose both sets by a pair of points. Webster won both sets with scores of 26-24 and 30-28 to take the match.

“We made a few too many errors on defense and serve receive, we weren’t as effective as we needed to be on setting the ball up and getting a good offense going,” coach Peterson explained.

Kady Grambow stepped in filling the shoes of her sister, Taylor, and led the team with four kills, Jaida Peterson added three more and Emma Ouellette had a couple of strong plays giving her two kills in the match.

“When games are close we just can’t give away free points and not make other teams work for their points,” according to Peterson.

Despite it all, coach Peterson believes in her Lady Bulldogs team. Continuing to improve and learn from each game is her goal.

The Lady Bulldogs traveled to Spring Valley for their conference opener and according to coach Peterson the team is better than they showed on September 13.

Boyceville lost in three straight sets as the Cardinals scored wins of 18-25, 6-25 and 21-25. The Bulldogs lead a fair portion in sets one and three before succumbing to Spring Valley’s attacks.

Tyra Kostman led the attack with eight kills and Jaida Peterson and Alyx Bloom both contributed six kills a piece.

“We’re coming into a tough week of conference schedule and we have to be ready to play,” stated Peterson.

Leading the attack for the Bulldogs was Jaida Peterson with six kills against the Cardinals. Hannah Johnson led Boyceville with two aces and Amber Retzloff contributed one ace. 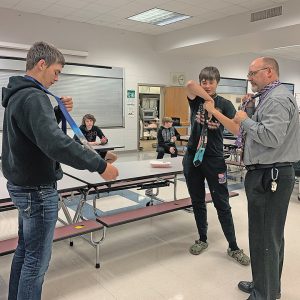