This past week I headed up to Eagle River with friends and family to stay at a beautiful cabin that is nestled deep in a snow covered forest. My 13-year-old daughter, Selina, my brother-in-law Dick Schuster, his sons, Riley and Trent. Troy Ringelstetter, a high school buddy of Trent and Riley’s, and Dick’s brother Kenny Schuster would make up our group.

We had three snowmobiles, a four-wheeler, and lots of ice fishing gear to keep us busy on what would be a weekend of nonstop snow, lots of wind, and some very cold temps.

The boys came up with snowmobiles, in tow last night and had lots of fun, of which most of it took place by the woodstove in the cabin, as Riley’s snowmobile was froze up.

The cabin we are staying in is located about five miles from Eagle River, is on 212-acres and is on the end of a very long driveway. There is so much snow in this part of the state that the drive will not be able to be plowed much more because there is no where to put the snow.

Buckskin, as this place was named by the great grandfather and grandfather of it’s present owners, which are Curt, David and Katie Walters (brothers and sister from the Poynette area). I am not related but in some ways it seems as though we are; as my brother-in-law, Dick’s sister, Jeanine married David Walters, we all went to the same high school and it seems we all have a lot of the same values and hobbies.

Today was the first time I ever saw Buckskin and shortly after setting my eyes on this beautiful getaway, I discovered that when I was a beautiful and brilliant baby, I was accidentally misplaced in the wrong Walters home and I am now ready to be a full owner by birthright of this heaven on earth.

Anyways, as I was saying we would be fishing on this adventure and today’s choice of lakes would be Lac Vieux Desert which is where the Wisconsin River begins, and the only time that I ever saw it is when I canoed the Wisconsin back in ’91 and my buddy Jeff Moll dropped me off to begin that journey.

Last year Riley, Trent, and Troy fished this beautiful body of water on the ice and kicked butt on northern pike up to 34-inches. Today it was truly a winter wonderland as we came to a public launch and the boys unloaded their snowmobiles while, Kenny Schuster and I would be driving our trucks. A few years back, Troy and Riley kind of put a truck through the ice on Winnibigoshish and now Mr. Ringelstetter is a bit skittish when it comes to driving pickups on the ice.

I followed the boys until my truck, as well as Kenny’s truck, got stuck and thus we set up camp. We put out 21 tip ups it was windy and snowing. We caught ten hammer handles (small northern pike) and the best part of this day was our time in my new cabin.

Propane lights, hand pump water, and a journal that is full of memories from simple, but incredible outdoor memories from several families that have been coming here since 1941 when this place was established to be a deer camp.

What did we do at night? A bit of poker, the kids playing Connect Four but most of all everyone just sitting around a woodstove and talking and laughing.

It was coffee and eggs and no rush to get on the ice today. We are all aware of the deep freeze that we call Wisconsin that actually began on opening day of deer gun season. Today was in the top ten as far as miserable to be on the ice.

We fished Pickeral Lake and could only get there by snowmobile. We only went because we said we would and it was cold. We all agreed that about three minutes was the max that exposed skin could handle and no one was too upset that the flags were not popping up on the tip ups.

We put up an 8-man ice fishing shack and cooked brats and two gallons of homemade chilli. Once in a while someone took a snowmobile for a ride and no one was exactly upset when the sun hit the western horizon and it was time to head back to Buckskin and the warmth of the woodstove.

Did I ever tell ya about the cabin I own in northern Wisconsin? I love it! Sunset

THIS WEEK’S COLUMN IS BROUGHT TO YOU BY: Ormson’s SuperValu

Cast Away: Kids 15 and under fish for free!

Lew father and son participate in WFCA all star game 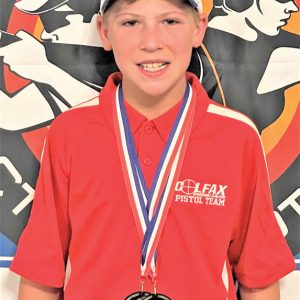