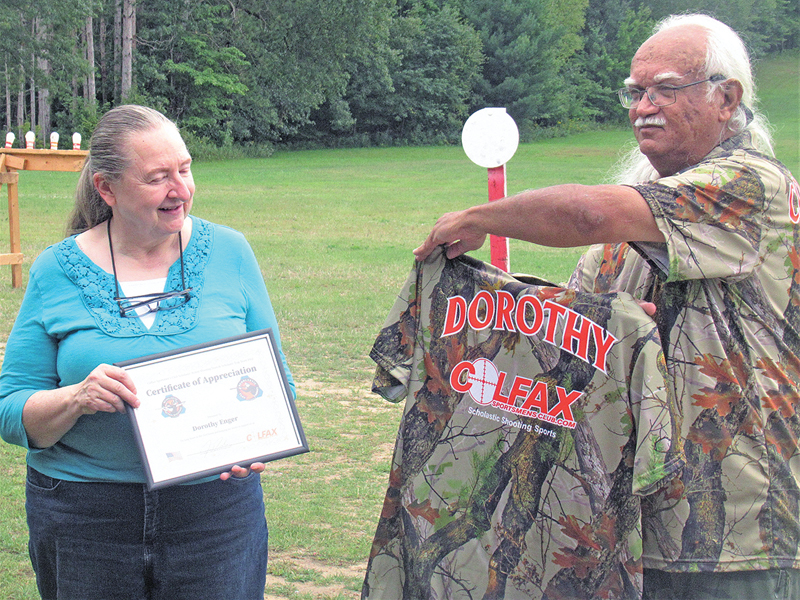 DOROTHY Enger, Colfax Sportsmen’s Club treasurer, has been to almost every practice of the Scholastic Trap Team and Scholastic Action Shooting Team, plus she keeps track of each team’s income and expenses. As a thank you for all the uncounted volunteer hours she has logged on behalf of the teams she was given a team jersey during the Sept. 10 awards program. While making the presentation Jim Nosker, head coach of both teams, explained the jersey had her first name on it rather than her last so that her husband wouldn’t be tempted to wear it for her. He claimed that was a needful precaution because many people want one. —photo submitted 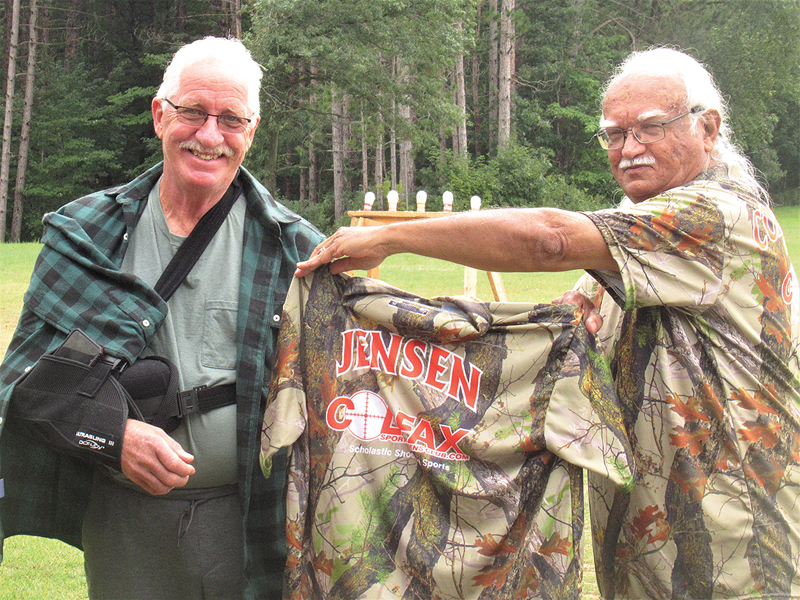 DURING the awards program for the Colfax Scholastic Trap Team and Colfax Scholastic Action Shooting Team, Jim Nosker, head coach of both teams, presents a team jersey to Doug Jensen, Colfax Sportsmen’s Club president. The club charters both teams and both the club and Jensen have done much for the teams, Nosker said. The jersey and a certificate of appreciation were given to Jensen as a token of thanks from the teams. —photo submitted 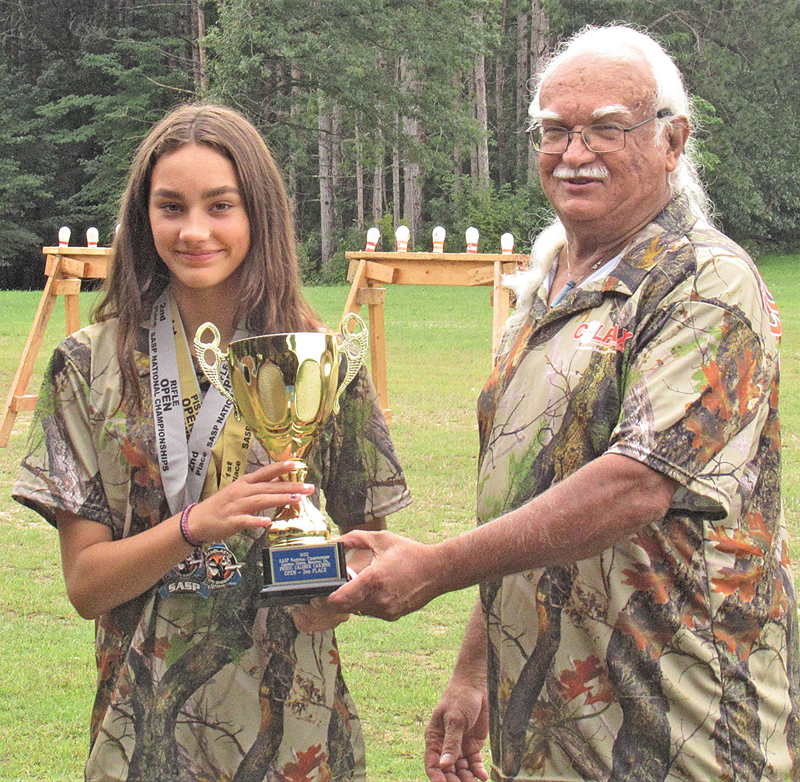 EVELYN Doyle and coach Jim Nosker show off the trophy the Colfax Action Shooting Team’s Open Squad received for placing second in the nation in Pistol Caliber Carbine. Doyle competed with the team during both the State Shoot and the National. For her efforts at State she captured medals for the Open Squad taking second place in Iron Sight Rifle and first place is Optic Rifle, Rimfire Pistol Iron, Rimfire Pistol Optic, and Pistol Caliber Carbine. At National she was awarded a medal for the squad’s second place berth, and a cap for going five by five on a target array. —photo submitted 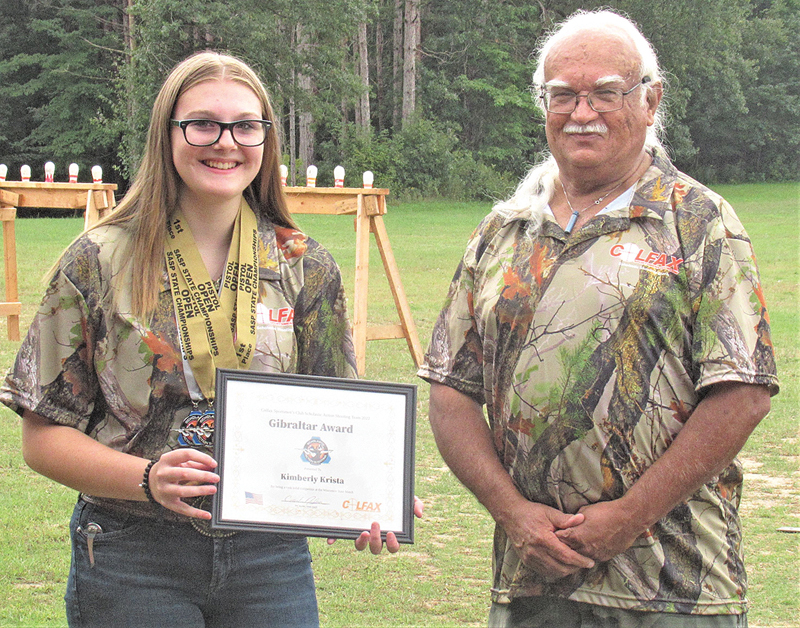 WEARING only three of the five medals she garnered at State, Kimberly Krista displays the Gibraltar Award she received from Jim Nosker, head coach of the Colfax Scholastic Action Shooting Team. Her medals are for the Open Squad taking second place in Iron Sight Rifle and first place in Optic Rifle, Rimfire Pistol Iron, Rimfire Pistol Optic, and Pistol Caliber Carbine. She’s only wearing the three because the other two haven’t been sent to the team yet, Nosker said. —photo submitted 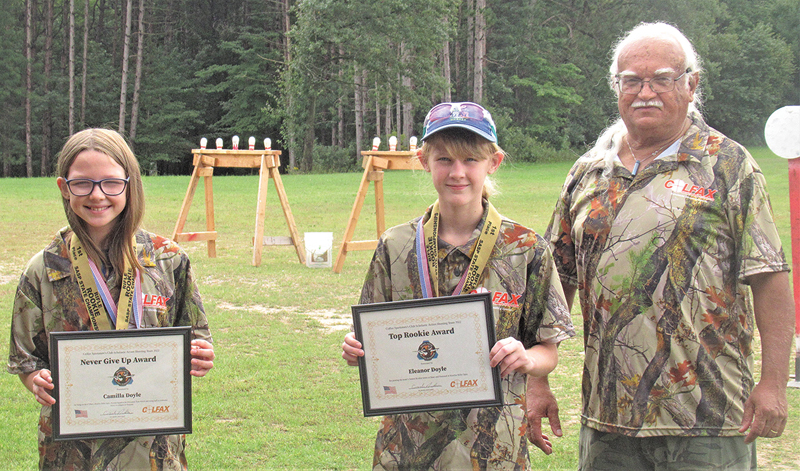 CAMILLA Doyle (left) received the Never Give Up Award for trying to tough it out and compete at National after suffering a non-shooting sport related eye injury. She also received a medal for her Rookie Squad taking first place at the Wisconsin State Shoot in Optic Rifle. Eleanor Doyle (center) received the Top Rookie Award, a medal for the Rookie Squad taking first place in Optic Rifle at the Wisconsin State Shoot and a cap that she isn’t wearing for going five by five at National. Coach Nosker explained the awards to those attending the Sep. 10 Scholastic Action Shooting Team’s awards program. —photo submitted 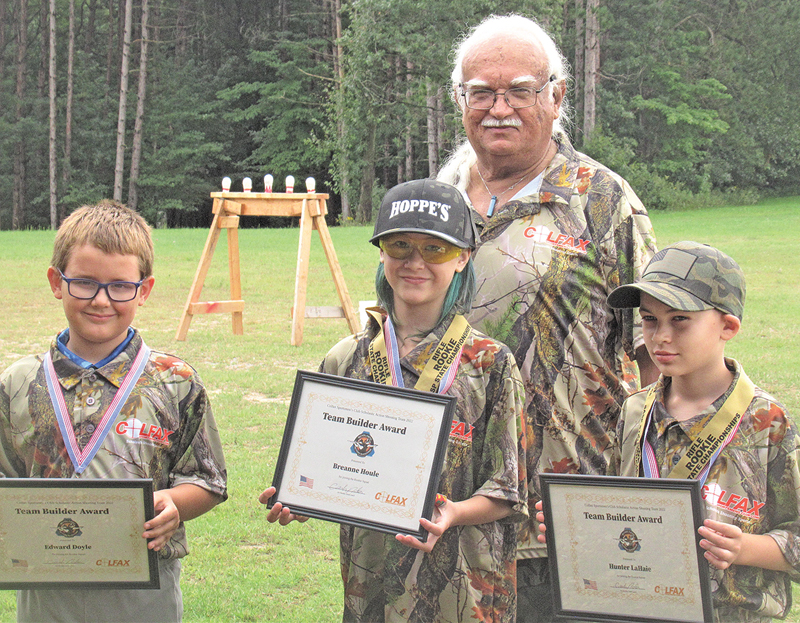 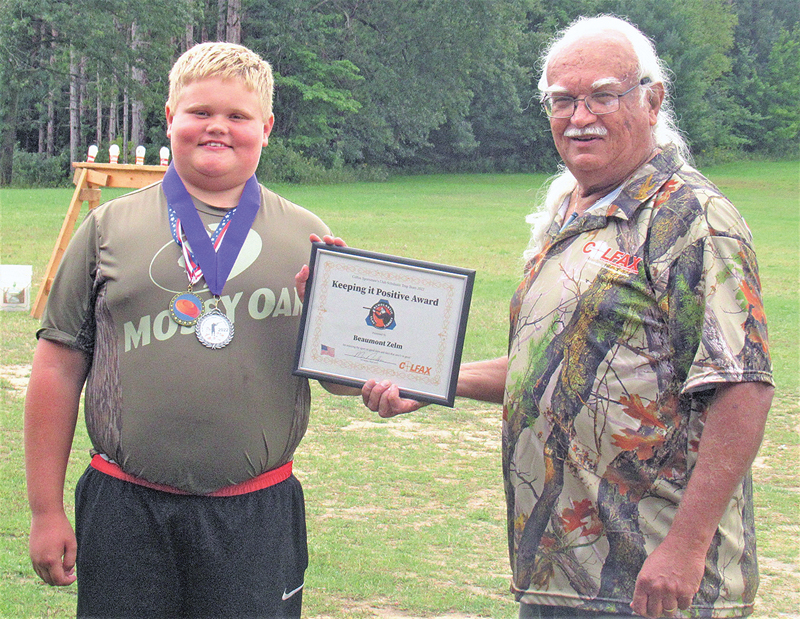 BEAU Zelm receives the Keeping it Positive Award from Jim Nosker, head coach of the Colfax Scholastic Trap Team. The presentation was made at the team’s picnic and award ceremony September 10. — photo submitted

Colfax Scholastic Trap Team and Colfax Scholastic Action Shooting Team both wrapped up their 2021-2022 season and kicked off the new 2022-2023 competitive year on September 10. They enjoyed a combined picnic and awards program and they hosted an Open House at the Colfax/Dunn County Shooting Sports Complex.

While lunch preparations were underway in the clubhouse, team members challenged each other in tug-of-war games – which included a few adults – and shooting sports scrabble.

Before they could resume games after lunch Jim Nosker, head coach for both teams, started awards presentations. All members of both teams received participation medals.

Beau Zelm was the only trap shooter able to attend. Other teams members were at competitions elsewhere that weren’t related to the team.

Zelm received the coach’s Keeping it Positive Certificate, for not letting it bother him when he didn’t perform on a round of trap the way he wanted to. He also received an Intermediate/Entry Level second place medal from the Conference Tournament. It’s the second year in a row that he’s medaled at the conference level.

Alex Johnson received the No Distraction certificate, because when he’s shooting trap that’s all he’s focused on, Nosker said.

Scholastic Action Program Awards took Nosker a little longer to get through.

Rookie Breanne Houle was able to compete at both the State and National matches. Being new to the team, she received a Team Builder certificate. As a member of the squad which won first place in the Wisconsin State Match, Rookie, Optics Rifle competition, she also received a first place medal.

At National Houle ran one of the target scenarios without a miss, addressing the five target array five times while using just 25 rounds. That’s known as going five by five and for the feat she received a cap donated by Hoppe’s. Others who managed that received their hats at the match, but by the time the team was given the hats, Houle had left.

Hunter LaHaie, also a Rookie, received a Team Builder certificate too. He wasn’t able to make the trip to the National Match, in Marengo, Ohio, but he was on the wining Optics Rifle squad at State and received a medal for that.

Edward Doyle was the third Rookie who received a Team Builder certificate. He hadn’t joined the team early enough to shoot at State. But, with LaHaie being unable to go to National, Doyle joined and shot with the squad at National.

Eleanor Doyle distinguished herself at both the State and National Matches and earned the Top Rookie Award. She was on the four athlete squad that won first place in Optics Rifle at State. She also went five by five at National and received a hat.

Camilla Doyle was the third Doyle sibling on the Rookie Squad and received a state first place medal as well for Optic Rifle. She traveled to National with every intention of taking part in the match, but suffered an eye injury the night before competition. After trips to an eye doctor and the hospital, she arrived at the range wanting to compete, but unable to because of the pain and vision loss she was experiencing. Due to that, she received the coach’s Never Give Up Award.

Because Rookie Squads are allowed to use a ghost score, the Colfax squad was able to stay in the competition even though it was one athlete short.

Kimberly Krista, a Varsity shooter, is on the team’s Open Squad, composed of athletes with varying years of involvement in the sport. Not being sure she’d be able compete due to other commitments, she joined the team just in time to qualify to compete at State. Because only Rookie Squads are allowed to use a ghost score, if Krista hadn’t been able to got to Sate, the squad wouldn’t have been able compete, Nosker explained.

With her on the squad and delivering rock solid times, the Colfax Open Squad did very well at the tournament. Therefore, Krista received the Gibraltar Award. She also received medals, or will receive them, for the squad taking second place in Iron Sight Rifle and first place in Optic Rifle, Rimfire Pistol Iron, Rimfire Pistol Optic, and Pistol Caliber Carbine (PCC.)

Nosker explained none of the athletes’ medals for Optic Rifle or PCC have arrived. He was told by the state match director that the medals are literally on a slow boat from China.

Evelyn Doyle, Intermediate/Advanced, was also on the top performing Open Squad at State and collected, or will collect, squad medals for second place Iron Rifle and first place Optic Pistol, Rimfire Pistol Iron, Rimfire Pistol Optic and PCC. Unusual for an athlete of her experience and skill level, she also received the Most Improved Award. Nosker explained that even though Evelyn’s times were fast enough for her squad to collect many first place medals last year in State and Regional tournaments, this year she axed a surprising amount off of her totals. If she hadn’t done that, due to changes in the squad’s makeup it wouldn’t have walked off with so many medals this year, he declared.

Evelyn was also on the team’s Open Squad at National and helped it claim second place in PCC.

Her three fellow squad members weren’t at the awards program. They were all in the Madison area attending a rimfire shoot not related to scholastic shooting sports.

Additionally at National, Johnson individually took first place in PCC, Men’s Intermediate/Entry Level. Last year he took first, Rookie, PCC, so the pressure is really on him next year when he will be competing in the Intermediate/Advanced group, Nosker said.

Allison Raddenbach was the fourth member of the Open Squad at the National Match. She joined the team just in time to qualify for the tournament. She was alerted to the opportunity during the coaching staff’s search for a replacement for Krista, who became unable to attend. Nosker opined that she was probably glad that she made the trip to Ohio.

Intended to introduce school aged youth to competitive shooting sports programs available to them, the Open House featured a Scholastic Action Shoot Program (SASP) stage, a Bowling Pin array and American Singles Trap Shooting that students could try, all for a nominal $5 fee. On hand were certified range safety officers and coaches ready to assist new shooters. Attendees were welcome to shoot their own rifles and shotguns, or use one of the ones Colfax Sportsmen’s Club members made available.

Doug Jensen, club president, said they wanted to make students aware of the opportunities the club, which built and maintains the shooting sports complex, has for them. Students can be on either, or both, of the scholastic shooting teams without jeopardizing their WIAA status. Plus, the teams practice on Sundays so that they don’t interfere with school sports, he said.

Additionally, students, as well as the general public, can take advantage of any of the club’s other shooting events. Most Monday nights from spring through fall the club has open trap shooting from 5-10. This year’s season wraps up October 10, Jensen said. Spring through fall there’s also Steel Challenge competition on Thursday evenings.

Jensen explained the club maintains a Facebook page and a web page, where it posts its calendar, showing when the range is open for use and when shoots and other special events are.