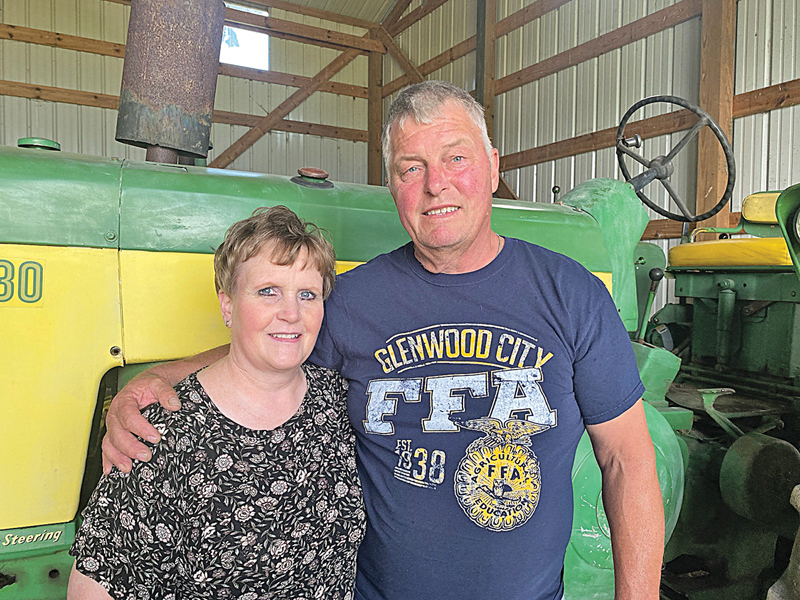 A history of family farming

Kondquest Holsteins owner Kraig Konder and his wife, Maureen, will soon be hanging up the milkers, after being part of a five generation dairy legacy in the Glenwood City area. The farming began with Kraig’s great-grandparents, Francis (Frank) and Teophilia (Tillie Palewicz) Kondratowicz, both from Poland, who followed Tillie’s brother and sister, John Palewicz and Valeria (Palewicz) Bogut, to Glenwood City, after having had enough of the Pennsylvania coal mines.  The couple came with their children, Anthony, Leo, Mary, and Frank Jr. (who changed the family name to Konder to be more “American”) looking for a better way of life.

Frank Jr., Kraig’s grandfather, took over the family farm after his parents died in 1928/29 respectively from miner’s lung. Frank found the love of his life in Milwaukee, through mutual family and friends, and married Regina Dziczkowski on July 15, 1929, in St. John the Baptist’s Rectory at the time, the current Jack Schmitz home. Frank and Regina would have their first child almost a year to the date later, Bruce, on the family farm. They went on to have two girls, Karen and Marcia.

Bruce, who passed away in 2010, took over the family farm in the mid-1950’s after being a car mechanic in Milwaukee with his uncle, and then serving in the Korean War. He and his bride Karen (Gedatus) Konder raised their four children there. Daughter Connie, who passed away in 1994 from a congenital heart condition, loved country life, and was an artist who often painted barns as her subject. Their two sons, Kraig and Kolt, still own the original family farm, now a Wisconsin Century Farm, renting out and farming the land, although there have been no dairy cattle there since 2016.

Kraig has continued to farm on his own since 1985, first renting out what was then the Leo and Bea Lyons farm north of Glenwood City on County Rd. X. He was employed as Quality Control Manager at Sons Tool in Woodville, while farming. Leo and Bea gave Kraig “a great start, and were wonderful farmers and people”. He had 62 acres to begin with, while renting out more to grow his operation and herd of registered Holsteins, originally purchased from the Clear Lake area. He also began to grow his family.

In 1988 he married the love of his life, Maureen Jourdeans, from Roberts. He and Maureen raised three girls on the farm, who became very active in the operation and interested in dairy and farming in their own way. Kirsten and Kaitlin represented Glenwood City High School as State FFA Officers, and on the Miss Glenwood City Court. Kirsten is the new Agricultural Education Teacher in Glenwood City, when she isn’t on adventures with her daughter Arianna; Kelsy enjoys country life in the Clear Lake area with her family, John Obermueller and their daughter Brooklyn, and has worked many years for Glenhaven; and Kaitlin, recently engaged to Jordan Hill, helps farmers with crop insurance at Compeer Financial in Baldwin. Kirsten and Kaitlin are both graduates from UW-River Falls, in Ag Education and Agribusiness, respectively.

By 1992, Kraig knew he and Maureen had to expand to remain in farming, and while renting out the Lyon’s place to others for a few years before selling, they purchased the “Standaert” farm where their home is now, across from “Krueger’s Hill” on 290th Street.

Kraig, following his grandfather and dad, ships milk to AMPI, and has always been actively involved in the organization. He has served as a Delegate and Vice President for AMPI’s District 39. He was also recently elected a Director of Division 3 for AMPI, which covers an area from Lake Superior to Iowa, and the border of Minnesota to the Thorp/Withee area. Kraig also served for several years as a Supervisor for the Township of Glenwood.

Reflections of a Local Farmer

Talking with Kraig on the farm recently, he reflected on how it is a bitter-sweet moment for him and his family. He drives bus for the School District of Glenwood City, and is looking forward to working in that position full time this fall, as he says good-bye to the dairy industry and his beloved cows. Maureen has slowly eased up on time in the barn, as she began working for Glenhaven several years back.

Kraig half-joked that he “wants to get out of farming as long as his knees still work”. He estimates he has put a milker on a cow 1.2 million times in his career. He also noted one of the most important relationships he has had, has been with various AMPI Field Personnel. They visit the farms and act as a liaison between the farmer and the dairy/creamery, in this case AMPI. Some of his best memories and gratitude are held for the late and former Fieldman Dick Bonte, along with Dick’s son Rick (and late brother Kevin) who hauled Kraig’s milk for years, and to Bernie Obermueller, who bought out the Bontes’ and recently sold his milk hauling truck to Terry Leckel out of Spooner. Kraig pondered on the long days that not only the farmers put in, but on the milk haulers and others involved in the farming industry. “It’s a hard job, and takes a lot people putting in long hours, to make it work”, he indicated. He remembered one especially tough year, back in 1988, the year he and Maureen married, was also a severe drought. He mentioned what a blessing it was that (the late) Bob Palewicz and Bob’s dad Victor let him help on their farm, too, in order to get additional hay he needed to keep his herd going over the summer. Without their hay, he isn’t sure he would have made it through the year. Another year when their children were small, Maureen had a health scare and stay in the hospital. Local friends and farmers pitched in to help Kraig get his hay up and other crops. Kraig conveyed gratitude for all the times friends and family came together to support each other.

When I asked Kraig how many cows he has now (at the peak they milked around 50, with about 75 other young-stock), he joked “Not enough, and too many.” He will be selling them soon, to be available for his new position driving bus, but has been challenged with that task. He explained that expanding herds and having more milk is not being encouraged by most creameries, within our current economy.

Kraig, like many farmers, grows close to his animals, and is especially sad to see two Polled Registered Red and White’s, Gracie and Flintstone, go, but thinks he has found a good home for them. His oldest cow is named Honolulu, and is 15. He explained that 15 year old cows are somewhat uncommon, and that with maximum production being a focus in the industry, it’s a rare occurrence.

When asked what his best memories are, Kraig mentioned he and Maureen raising their three girls on the farm, adding that they have all grown up into hard workers, learning how to work on the farm from an early age. He also loves to watch and help deliver new calves.

From the U.S. Dept. of Agriculture, National Agriculture Statistics Service, last year, there were 64,100 total farms in the State of Wisconsin, but only a fraction of that are dairy farms. From January 2021 to January 2022, total dairy farms in Wisconsin dropped from 6,932 to 6,553, a decrease of over 5%.

As I and one of my son’s left Kraig and Maureen’s farm after our chat about his leaving the industry, I took another look in my rear-view mirror. As Kraig walked back out to the barn, alone, to finish up chores, while Maureen was getting ready for work, I remembered one question I forgot to ask him, “What will he miss the most about farming?”. We can’t help but think . . . . Everything.