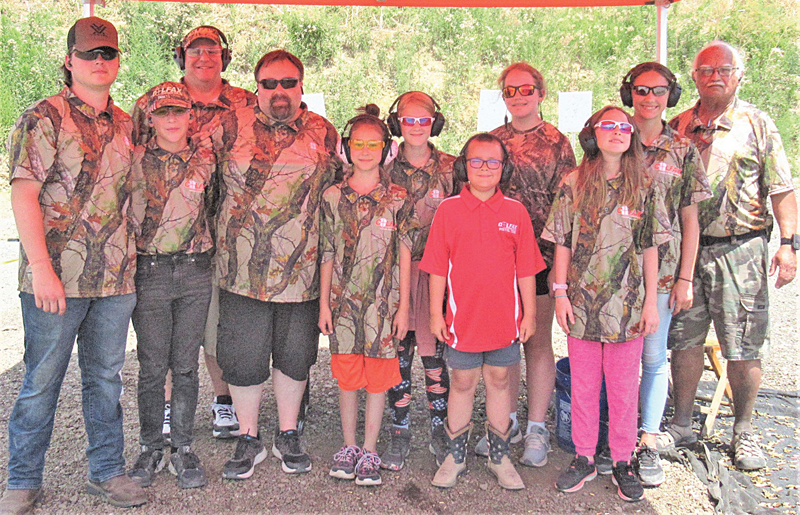 Thanks to solid performances by all four of its members, the team’s Open Squad claimed the second-place National trophy in Pistol Caliber Carbine, reported Jim Nosker, head coach. Squad members are Kyle Weller of Hayward, Evelyn Doyle of Elk Mound, Alex Johnson of Weston, and Allison Raddenbach of Weston.

She also captured third, Ladies’, Intermediate/Entry Level, pistol caliber carbine. That event is shot with a carbine length rifle, chambered for a pistol cartridge, with 9mm being the most common chambering.

Alex Johnson was the third Colfax athlete to claim an individual medal. He won first place, pistol caliber carbine, Men’s, Intermediate/Entry Level. In doing so, he proved that last year’s first place in the same event, but shooting in the Rookie class, wasn’t a fluke.

Colfax’ Rookie Squad faced a setback when Camilla Doyle suffered an eye injury the night before they competed and had to withdraw. That left her fellow squad members Eleanor Doyle, Breanne Houle and Edward Doyle partnered with a ghost score, which potentially cost the squad about 70 seconds. As it is, they came in ninth, with several other squads below them.

This match is the first the Colfax team has come home both with so many national medalists and so many individual performance national medals, Nosker said.

He explained there were over 2,200 entries in this year’s match, making it the largest steel shooting competition in world history. Those 2,200 entries competed for 186 individual medals. Colfax attended with eight athletes and returned with six of those medals, or three percent of the total awarded.

Nosker said the team always welcomes new athletes, from first through 12th grades. During it’s September 10 organizational meeting for the new competitive season, the team will be hosting an open house at the Colfax/Dunn County Shooting Sports Complex. That event will be for any grade school aged youth, and their parents, who want to find out more about the Scholastic Action Shooting Program. More detailed information on the open house will be available in a few weeks, he concluded.