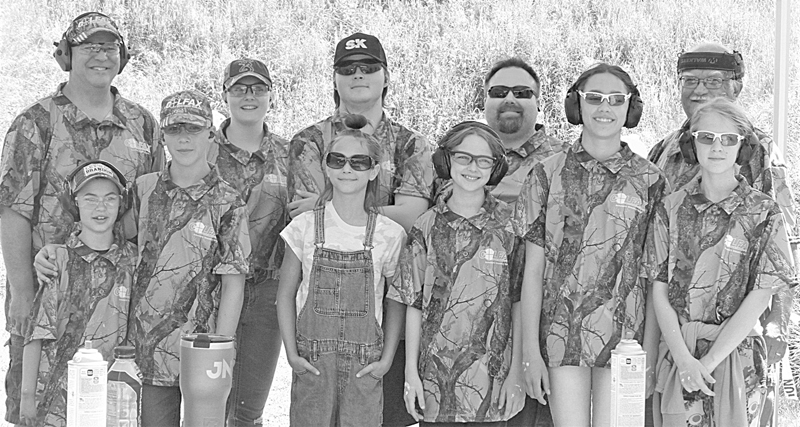 Colfax Scholastic Action Shooting Team dominated it’s competition at the state match on Father’s Day weekend. Out of the six disciplines it entered, the Colfax team came home from Saukville with one second and five first place finishes.

SASP provides a level playing field for athletes to test themselves on, regardless of age, gender or handicap. Jim Nosker, Colfax head coach, said scholastic shooting has proven to be safer than traditional school sports. Also, it works well for home schooled students who need a sport.

This year SASP membership nationwide is 46% female. Colfax’ roster shows it’s membership is 54% female. But, 63% of its athletes who went to state were female.

Colfax’ team, sponsored by the Colfax Sportsmen’s Club, is one of the smallest in the state, Nosker claimed. This year it was only able to put together two squads, of four athletes each, for the state competition. 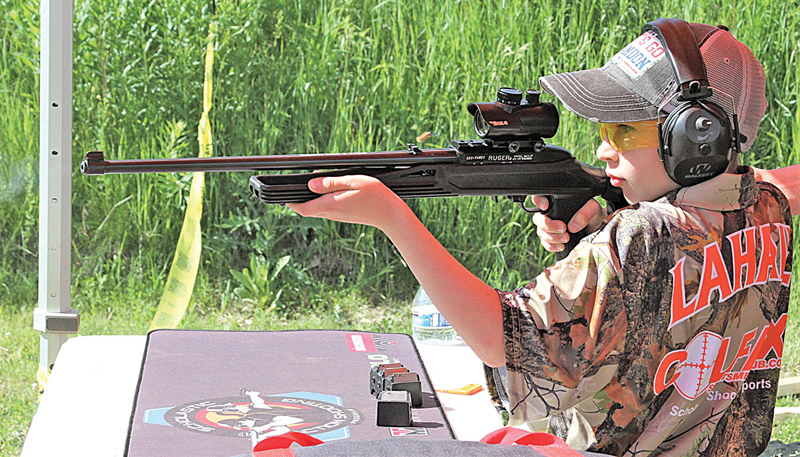 HUNTER LaHaie sends a round down range during the Scholastic Action Shooting Sports Wisconsin State Match. Eight years old at the time, he was Colfax’ youngest shooter in the tournament. His Rookie Squad took first place. —photo submitted

Rookies Eleanor Doyle and Camilla Doyle of Elk Mound, Hunter LaHaie of Colfax, and Breanne Houle of Menomonie, competed in Optics Rifle, a rimfire event. They nailed down first place with a time of 291.86 seconds. That was 12.73 seconds faster than second place Union Grove.

But in Optics Rifle the tables were turned. Colfax recorded a total time of 162.95 seconds. That put them a comfortable 31.99 seconds ahead of Dubuque and almost 40 seconds ahead of the third place Wilmot Panthers.

Colfax’ times were slower in Rimfire Pistol Iron Sight, where their aggregate was 234.51 seconds. Just the same, it was a comfortable 15.57 seconds faster than second place Ozaukee Scholastic Shooting Sports Pistol Team.

In Rimfire Pistol Optic, Colfax’ 210.17 was only 1.99 seconds faster than the Ozaukee Team’s total. However, that was fast enough to give Colfax another first place.

Weller claimed high overall honors for PCC with a blistering 33.83 seconds. That was 2.65 seconds ahead of the second place finisher, who was on the Boone/Hartford Hotshots team. Because Weller’s time was the result of addressing 80 different targets, it means his average was only .42 seconds per target.

Nosker said the Colfax based athletes have been a force in the Wisconsin SASP ever since the team went to its first match in 2015. Colfax Sportsmen’s Club made training facilities available to the team and early coaches such as team founder Jim Kraft and Tony Anderson poured a lot of hours into working with the athletes. As a result, Colfax surprised the other teams in its inaugural year at state, claiming first place slots.

Every year since then has found Colfax squads claiming first and second place honors.

Things will be more difficult for the Colfax team at the Scholastic Action Shooting Program’s National Match, July  9-17 at the Cardinal Shooting Center, Marengo, Ohio. Nosker explained that match is the largest action shooting sports competition in the world, meaning Colfax athletes will be up against world class shooters.

Shooters coming out of southern states, such as Florida, Georgia and Texas can practice outdoors year around, he said. Some of the southern teams have such strong financial backers that athletes don’t need to pay for any of their own ammunition or some of their other costs. And, some individual athletes have private, professional, coaches as well.