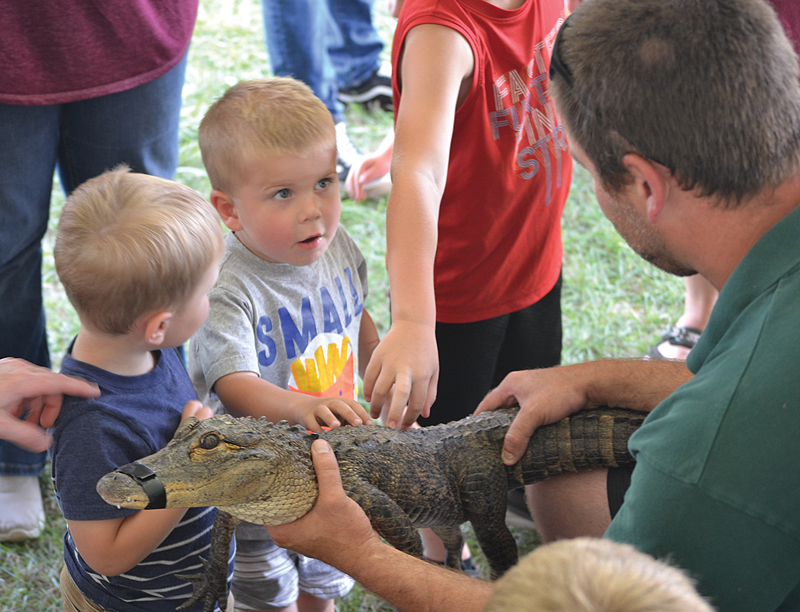 WOW! — This youngster was able to get up close to a live alligator during one of the many shows that Monty’s Traveling Reptile Show does through the year. —photo by Carole Schurtz

Well — now you can say you’ve seen it at the Colfax Free Fair, too.

Monty’s Traveling Reptile Show will be at the Colfax Free Fair on Sunday, June 19, beginning at 2 p.m.

The Colfax Fair Board had initially planned to have the “Birds of Prey” program from the University of Minnesota Raptor Center, but the program was cancelled because of the avian influenza outbreak, said Steve Ackerlund, chair of the Colfax Fair Board.

Instead, visitors to the fair will be treated to Monty’s Traveling Reptile Show.

Monty Krizan, the founder of Monty’s Traveling Reptile Show, was a regular at the Minnesota State Fair since 1980.

Krizan died in 2018, and his nephew, Brian Teigen, a native of Glenwood City, has taken over the show.

Monty’s oldest reptile is an American alligator named Albert that Krizan acquired in the 1970s.

The alligator was small enough when Monty got him that he could carry the alligator around with him in his pocket.

Named after Monty’s father, who owned a farm near Glenwood City, Albert grew to be eight feet long and to weigh 300 pounds.

Monty, a Glenwood City native, graduated from UW-River Falls in 1970 with a degree in journalism and speech. He began Monty’s Traveling Reptile Show in the 1970s by giving reptile talks at schools.

Over the years, the show traveled a million miles all together, from Wisconsin to California to Canada, to 10,000 school presentations, and annually to the Minnesota State Fair and the Wisconsin State Fair.

Krizan also had a television show that was filmed in Canada in the 1990s.

Many of the reptiles Monty acquired were “rescues” that people had gotten as pets but then did not know how to handle them as they grew bigger.

There will be no poultry at the fair this year because of avian influenza.

Arts and crafts judging is scheduled to begin at 1 p.m. Thursday.

Animal judging continues on Friday with livestock beginning at 9 a.m.

Depending on the exhibits entered in the fair, livestock can include pigs, goats, sheep, dairy and beef cattle.

Fair awards will be announced at 7 p.m. Friday night at the free stage.

Little League baseball and softball players and coaches will be presented Friday evening as well.

The Outlaw Farms Petting Zoo will be set up at the fair on Saturday from 2 p.m. to 6 p.m.

A cake auction will be held at 6 p.m. Thursday.

Trivia in the beer tent will begin at 8 p.m. Thursday.

A variety of entertainment is scheduled for the fair at the free stage and in the beer garden.

Derek Westholm will perform on the free stage from 6 p.m. to 8 p.m. Friday.

Westholm is a music teacher in the Colfax school district and also directs the high school musical productions.

Jordan Herrick and Holy Ruckus will perform on the free stage from 6 p.m. to 8 p.m. Saturday.

From 8 p.m. until midnight Friday, the Bear Creek Band will perform in the beer garden.

Ranger Rudy and the Swinging Wingtips will perform in the beer garden Saturday evening from 8 p.m. until midnight.

Activities at the fair on Sunday begin at 10:30 a.m. with the Bethany Worship Band.

At 11 a.m., there will be a non-denominational church service.

After the service, the Holden Lutheran Church fair stand will serve a chicken dinner.

The Colfax FFA Alumni Auction will begin at 1 p.m. Sunday.