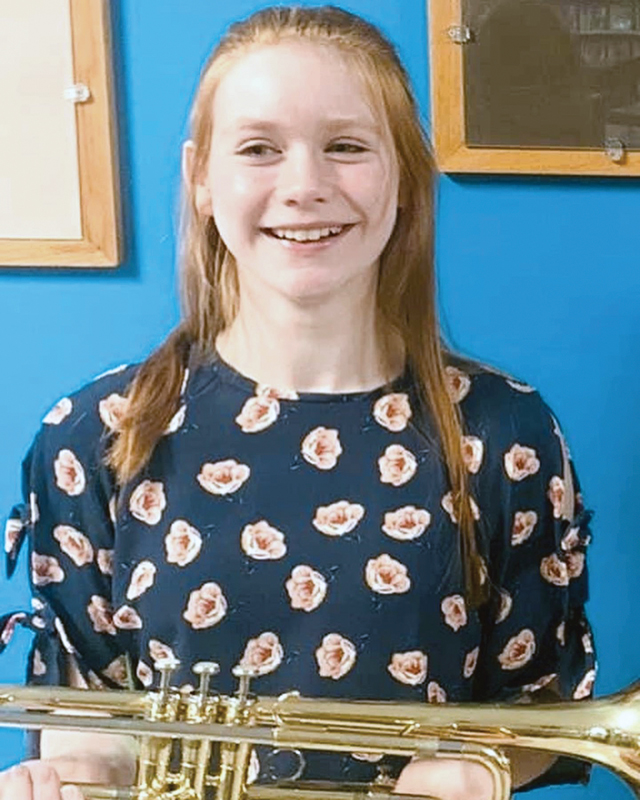 Each year, around 1000 auditions occur for the 305 available positions in the Middle Level Honors State Music Project. Every student that auditions should be very proud of his/her accomplishment, as preparation for the audition is an honor in itself.  The audition consists of a prepared solo, four memorized scales, sight reading etude, and participating in a masterclass.

Erica will be an 8th grader and the daughter of Brent & April Bauman.

Erica will travel to Verona High School on Friday, October 28th for rehearsal and the band will perform a concert on Saturday, October 29th.

The 2022 Honors Band will be under the direction of Dr. Erica J. Neidlinger, associate professor and wind conductor at DePaul University in Chicago. Additional responsibilities include teaching conducting and wind history/repertoire courses as well as instrumental music education courses. Neidlinger’s conducting experiences are broad, ranging from chamber ensembles, contemporary ensembles, symphonic bands and wind ensembles.  She has worked with some of the finest musicians in Chicago as featured artists with the DePaul ensembles.

In addition, Neidlinger has conducted performances nationally and internationally. She has been featured as a guest conductor/clinician in Riga, Latvia and Moscow, Russia and has traveled to Singapore and Canada as an ensemble adjudicator/clinician. International presentations include the World Association for Symphonic Bands and Ensembles and the Midwest International Band and Orchestra Clinic.  he has conducted honor bands and presented at many conferences across the United States, while also maintaining a highly active schedule as a clinician for ensembles visiting Chicago.

Before her position at DePaul, Neidlinger served on the faculty of the University of Nebraska at Omaha, where she conducted university concert ensembles and directed the marching band.  During this time, she was also conductor of the Nebraska Wind Symphony. She held a similar role at The Ohio State University as assistant director of the marching band and member of the music education faculty. Neidlinger completed her doctoral degree at the University of Minnesota under the supervision of Professor Craig Kirchhoff.  Her research applies Laban’s Effort Shape Theory to the expressive development of conductors.