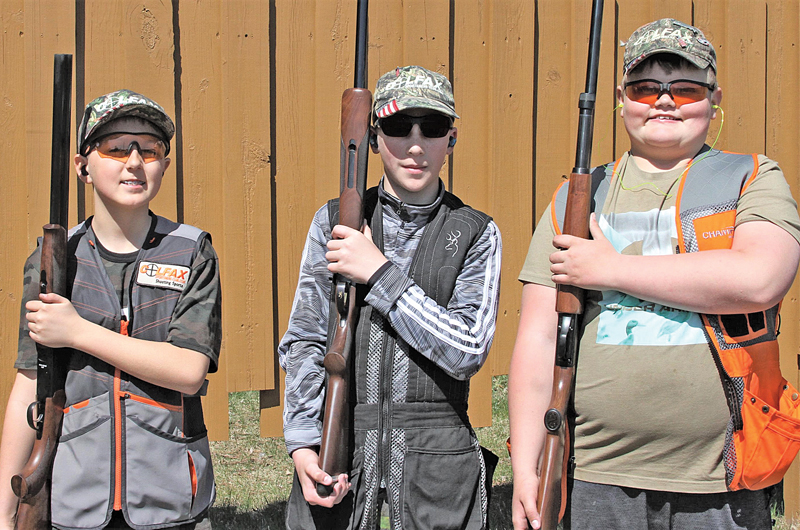 MEMBERS of the Colfax Scholastic Trap Team, sponsored by Colfax Sportsmen’s Club, took part in the May 7 Eau Claire Invitational Scholastic Trap Shoot, hosted by the Hudson Raiders at the Eau Rod and Gun Club. Team members are (from left) Lane Unruh, Alex Johnson, Beau Zelm. They were accompanied to the event by Jim Nosker, head coach. —photo submitted

Activities can be kept track off by looking at the club’s website calendar. It’s a good idea to check the calendar before driving to the range, in case there’s been a schedule change. The calendar can be found at http://colfaxsportsmensclub.com/calendar-of-hours-events/

Most Monday evenings there’s open trap shooting, starting at 5:00 p.m. and continuing until either 10:00 p.m., or when people are done shooting, which ever comes first.

Most Thursday afternoons there’s open rifle and pistol shooting 1-4:00 p.m. On most Thursday evenings there’s a Steel Challenge Match 5:30 p.m. to completion. Competitors should be there by 5:00 p.m. to register. Checking the club’s Facebook page can save an unnecessary drive in the event the weekly match has to be canceled for some reason. https://www.facebook.com/colfaxsportmensclub 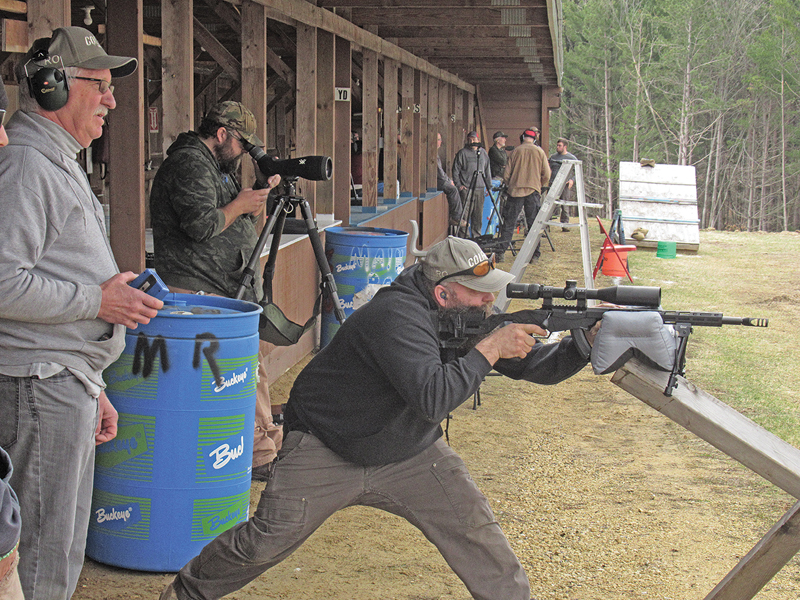 Registration for most metallic cartridge matches hosted by the club should be done through Practiscore, https://practiscore.com/. The pubic is invited to come and watch any of the shoots.

For May the remaining organized competition is a Rimfire Challenge Eight Stage Match on Saturday, May 21. Check is 7:30 a.m.; the event starts 8:30 a.m. Rimfire Challenge is shot with detachable magazine .22 rimfire rifles, or .22 pistols.

There are four different events on tap for June. The club’s Monthly Steel Challenge Match is June 4, with check-in opening at 8:30 a.m. and the match starting at 9:30.

On June 11 there’s a Duck Flurry on the trap range. Check in at noon and shooting will start immediately. It will continue for as long as there are shooters who want to compete.

On June 18 there’s a National Rifle League (NRL) .22 Rifle Match with competitors shooting from field positions at small targets at long (for a .22 rimfire) ranges. Check in is 9:00 a.m. and competition will begin at 9:30.

On June 19 there’s a United Multigun League (UML) 3-Gun Match, with check in that morning 8:30-9:00, with the match starting at 9:30. Three gun matches have competitors use pistols, shotguns and rifles. Modern Sporting Rifles (MSRs), based on the Armalite Rifle (AR) platform dominate the sport, as do 9mm pistols and high capacity 12 gauge autoloading shotguns. Some variations have competitors using PCCs.

In July things will start off with a Steel Challenge Match on July 2, followed by a UML 3-Gun Match on July 10. On July 16 there’s a Bowling Pin Match, where competitors shoot bowling pins off of a table as quickly as possible. On July 23 there’s a Trap Top Gun Shoot and on July 30-31 the club is hosting the Midwest Regional Rimfire Challenge Match, which is expected to bring in competitors from throughout the Midwest.

August will start off with the club’s Monthly Steel Challenge Match on the 6th. On August 14 there’s a Monthly 3-Gun UML Match. August 20 will be particularly busy with a NRL .22 Match starting 9:30 a.m. and a 20 Gauge Duck Flurry on the trap field at noon. On August 27-28 the club will host the Wisconsin Steel Challenge Championship, starting 7:30 a.m. both days.

In September things slows down considerably. There’s a Hunter Education Internet Field Day on Saturday, September 17, followed by a NRL22 match on September 18. Colfax 3-Gun Finale UML Match, which historically has been a big event for the club, will be September 24-25.

November 5 is the date of the year’s final Monthly Steel Challenge Match. The finale NRL22 shoot of the year will be December 10.

Conference Shooting Sports was held May 14