Thousands of students headed to various locations across the state in the past few weeks for their opportunity to perform in a Wisconsin School Music Association (WSMA) State Music Festival – one of the largest student events of its kind in the nation.

In order to participate in the State Music Festivals, students must first earn a “starred first” rating in Class A (the most difficult music) at a WSMA District Music Festival, hosted by schools for students in grades 6-12. Students can select from a variety of instrumental and vocal solo and ensemble categories for their performances. Over 225 district festivals were held in Wisconsin during the past six months, involving more participants than any other student activity in the state.

The Glenwood City Brass choir ready to perform at the State Solo/Ensemble competition on May 7 at UW-Eau Claire. They received a I rating. Photo submitted 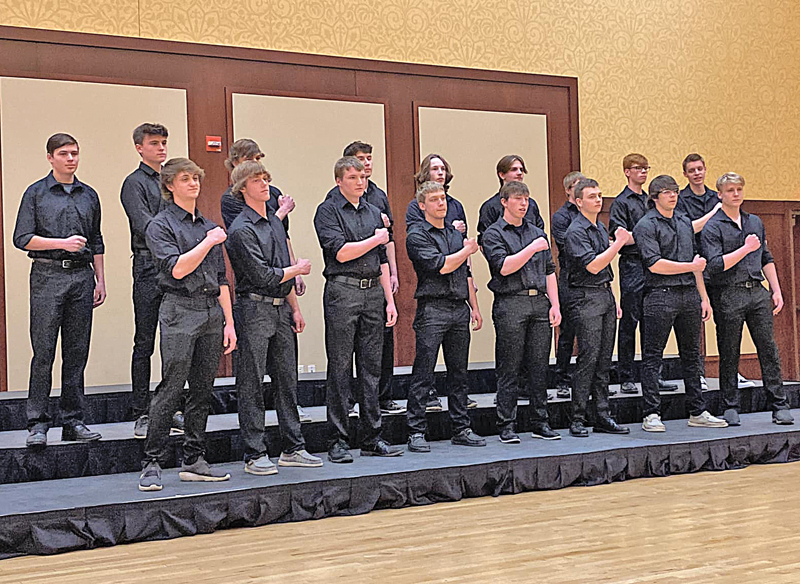 The Glenwood City Junior/Senior Boy’s Vocal Ensemble performing at StateSolo/Ensemble competion at UW-Eau Claire on May 7. They received a I rating for their performance. Photo submitted

Wisconsin School Music Association is a service organization with more than 950 member public and private schools. Last year, over 219,000 students took the initiative to become involved in WSMA activities, including District and State Music Festivals, State Honors Projects, State Marching Band Championships and Concert Festivals. WSMA is headquartered in, owns and operates the Wisconsin Center for Music Education – first of its kind in the nation.

The organization is governed by a board of directors made up of superintendents, principals and other officers from all over the state. WSMA believes music is a basic human need and that all children have the right to experience all that music offers.