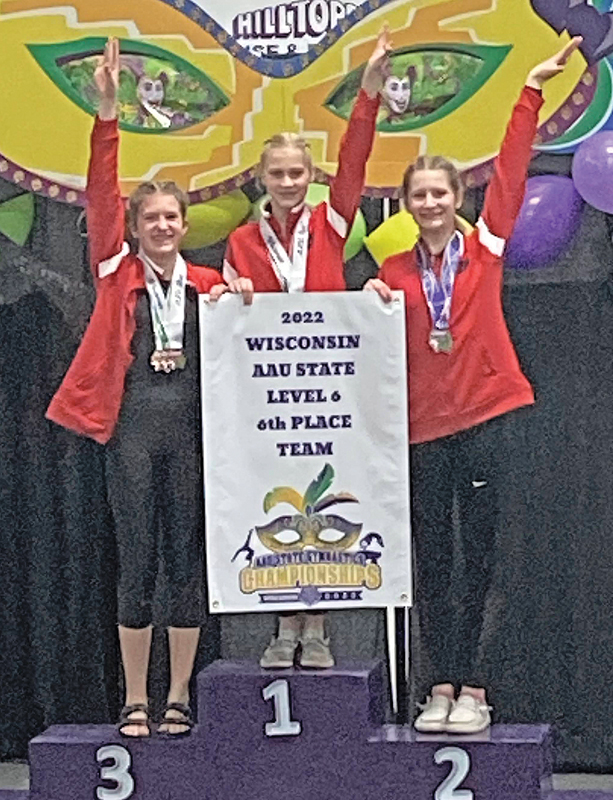 The Phoenix Gymnastics Team competed in the 2022 AAU State Gymnastics Championships in Onalaska on April 29th and 30th.

The team came home with numerous State Champion Titles, as well as huge personal accomplishments performing skills for the first time this season! They have been working hard all year, participating in ten meets throughout Wisconsin and Minnesota, to prepare for the State Competition.

Phoenix’s Level 6 and 7 gymnasts started the tournament off for the team by competing on Friday 4/29. The Level 6 team, consisting of Ella Nelson, Reagan Nelson, and Trina Pyka, finished strong, and Ella Nelson brought home a State Vault Champion title.

Taylor Revoir, Level 7, was awarded the All-State trophy for having the highest All-Around from all age groups for Level 7. She was also the State Beam Champion.

Aydin Bjork competed in the Bronze Level; she did absolutely amazing capturing the title of State Beam Champion as well as the All-Around State Champion.

The team is now preparing for the Nationals Championship being held in Springfield, IL, at the end of June. Twelve Phoenix Team gymnasts will be competing there. Stay tuned to hear how they do.

Phoenix Gymnastics will be having a Showcase on Friday, May 20 at 6pm, and Saturday, May 21st at 1pm. The showcase gives gymnasts of all ages (Beginner to Team) an opportunity to showcase their skills to family, friends, and the community. The event will be held in the Bloomer High School gymnasium. Come and check out the talented gymnasts we have here in Bloomer. Concessions and raffles will also be available.

Next year, Bloomer and Colfax will debut their Co-Op High School Gymnastics Team.