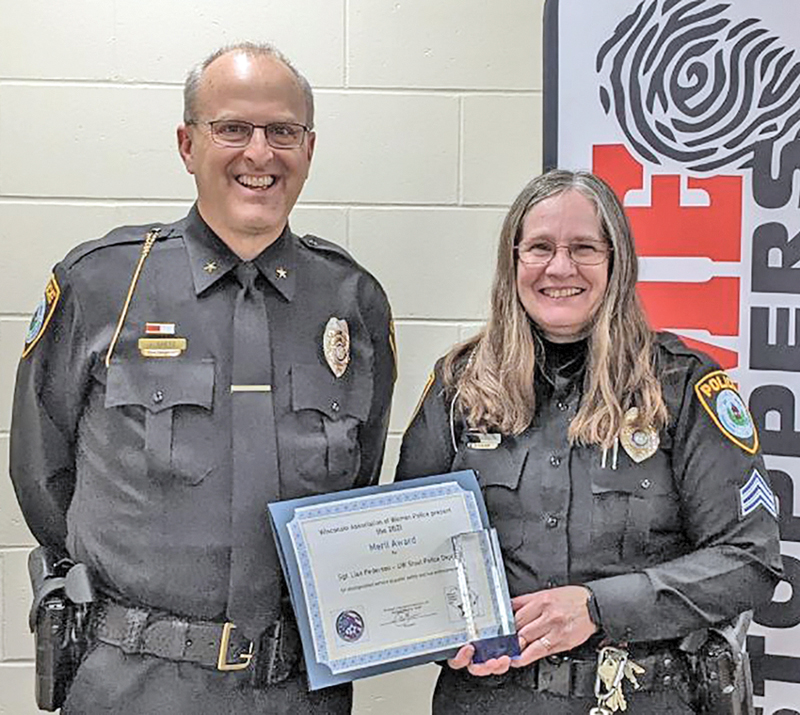 Sgt. Lisa Pederson of the UW-Stout police holds her merit award from the Wisconsin Association of Women Police alongside Chief Jason Spetz, who nominated her. —photo submitted

Menomonie, Wis. — As a sergeant with the University of Wisconsin-Stout police, Lisa Pederson believes there are two equally important halves of her work as an officer.

One involves enforcement of the law. The other involves reinforcement. The second half of the equation — working directly with and getting to know students and staff to gain their respect — drew Pederson to UW-Stout and has inspired her campus work for 18 years.

Her efforts have been recognized this spring with a Merit Award from the Wisconsin Association of Women Police for superior accomplishments and project leadership that make a significant contribution to public safety.

For Pederson, of Boyceville, effective law enforcement begins with building relationships, a concept known as community policing. “I’m very much a people person. It’s a part of the job I gravitate to, being able to talk with students and help them through situations, be that presence when you can help them,” she said.

She has worked an afternoon-evening shift for most of her career at UW-Stout, forgoing time in her squad car to become a regular presence in the residence halls and stopping in the student center or dining facilities to chat with students, play a board game with them or even have dinner with them.

“You really get to know people,” Pederson said. “It’s those types of interactions that make students think, ‘Maybe they are OK.’ You might be their first contact with a law enforcement officer, and you need to make that as positive of an experience as you can, even if it doesn’t always work.”

Pederson’s example has become part of the culture with UW-Stout police, Chief Jason Spetz said. “Lisa taught me everything I know about working with a community. We’re doing it here and doing it well, based on what Lisa has taught us,” he said.

While they keep a professional distance, Pederson, Spetz and the five other full-time officers at University Police have been invited to students’ weddings, been thanked by parents and been in many a commencement photo with graduates as a result of the connections they’ve made and the impacts they’ve had on students.

“You can build relationships with students you’ve dealt with three or four times,” Pederson said, a process that may even include casual calls or visits to the student’s residence hall room just to make sure they’re doing OK. 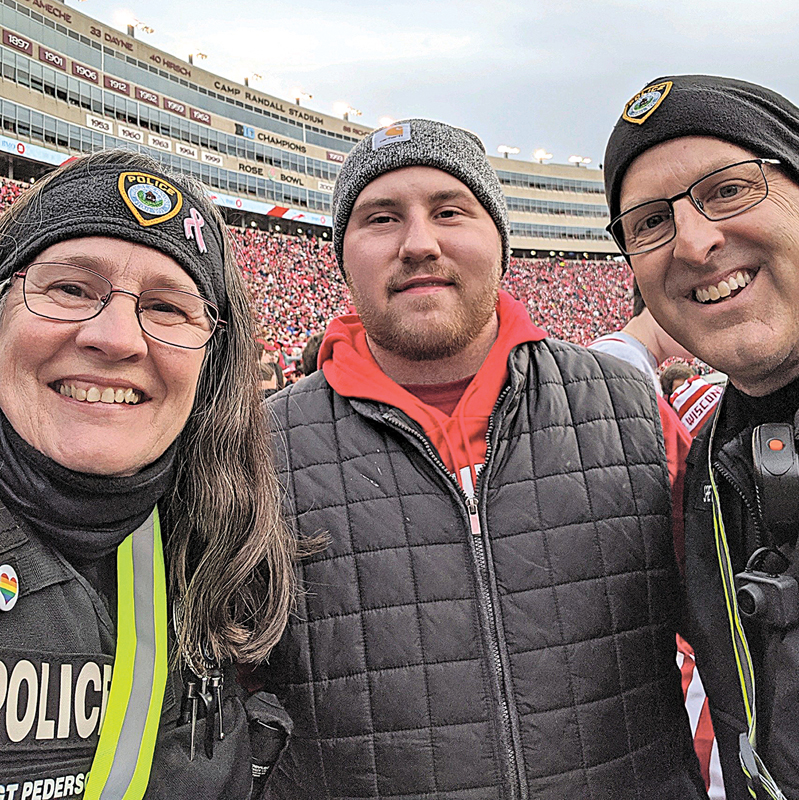 One of her most memorable career moments came in 2012 when she and Spetz answered an emergency call about an unresponsive student. The found Ryan Child on the ground near South Hall, not breathing. As an EMT who teaches CPR, Pederson led the resuscitation process, including chest compressions after fire department EMTs arrived and shocked Child.

Child was revived, taken to the hospital and soon recovered. The first-year student from Lake Geneva unknowingly had a genetic abnormality called hypertrophic cardiomyopathy, or tissue thickening in the muscle of his heart.

He went on to earn a degree and today owns a restaurant in Wisconsin.

Pederson and Spetz have remained friends with Child and recently had their picture taken with him when they were working at a University of Wisconsin football game in Madison and saw Child.

Pederson’s career in public service began with Boyceville Fire and Ambulance. She was a firefighter and EMT when she saw an ad for Dunn County Sheriff’s Department reserve officers. She worked as a part time officer for almost 10 years at the department, including five part time at UW-Stout, while attending the police academy at Chippewa Valley Technical College. She also worked at Campus Ministry on campus.

When opportunities to work full time opened in 2004 with both departments, she chose UW-Stout. “I had always loved working at UW-Stout,” she said.

Working with students, many of them criminal justice and rehabilitation majors, as part of the department’s Community Service Officer program.

Volunteering for the Shop with a Cop community fall and winter fundraiser.

Spetz nominated Pederson for the award. “Lisa has touched so many lives within the law enforcement ranks and the community she serves,” he said.

“I’ve been privileged to work with Lisa since my first day on the job with our agency. I came in as an experienced officer, but Lisa taught me skills I never would have imagined before I started, how to effectively connect with a community. She is one of a kind in this area.”