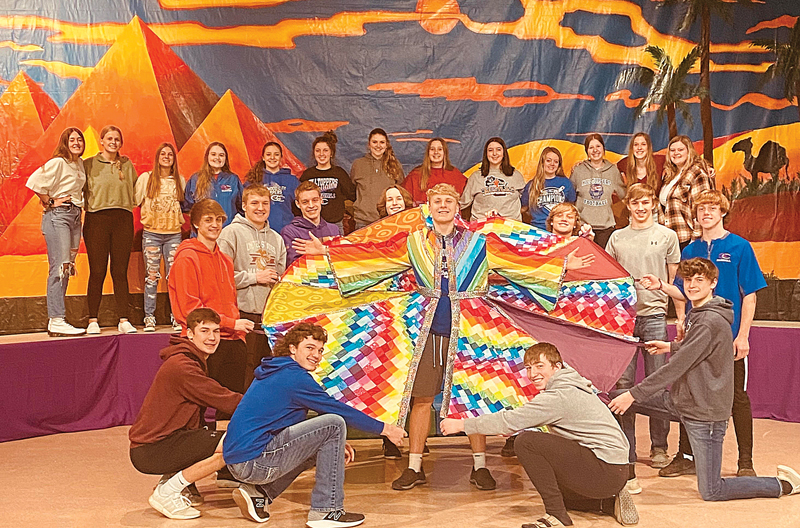 AMAZING PRODUCTION — The Glenwood City music department will be performing its all-school production of “Jospeh and the Amazing Technicolor Dreamcoat” this Friday and Saturday, April 8 and 9. The production features 75 cast members, some of which are pictured above, including Nick Hierlmeier as Joseph. The beautiful costumes including the technicolor dreamcoat were hand-sewn by Heather Kittelson. —photo submitted

GLENWOOD CITY — The Glenwood City music department is busy rehearsing for its all-school musical production of “Joseph and the Amazing Technicolor Dreamcoat, which will be presented this weekend, Friday and Saturday, April 8 and 9th.

This excitement-packed show features a 75 member cast, with Nick Hierlmeier as Joseph, Lindsay Bazille and Isabella Simmons as the narrators, and Brendan Booth in dual roles as Jacob and the Pharaoh.

The production also features a 35 member children’s chorus made up of students in 4th through 8th Grade.

This is the final production directed by Angela Hierlmeier, as she wraps up her 31st year of teaching.

The show is also directed by Matt Lamb, and it features a gorgeous set designed by Mary Jones, Brenda Johnson, Brooklyn Caress, and Sara DeSmith, as well as beautiful costumes hand-sewn by Heather Kittelson and a pit orchestra made up of professional musicians from our area.