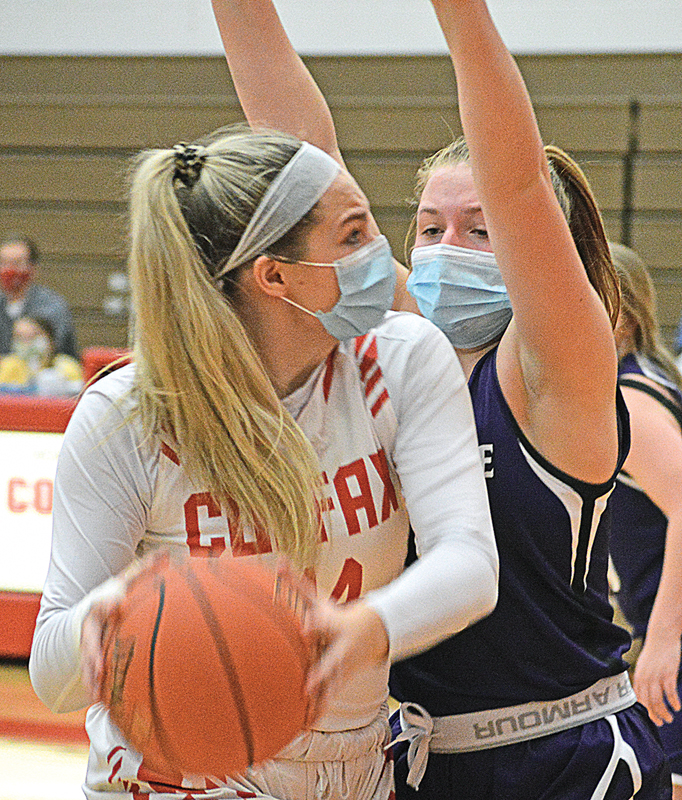 TYLER Noll of Colfax looked for an open teammate while being closely guarded by a Boyceville defender in the conference match up January 18 in Colfax. —photo by Marlys Kruger

The Colfax girls began their week in a tie for first place with Durand in the Dunn-St. Croix Conference. After a 73-41 home win over Boyceville January 18, they found themselves all alone at the top after their neighbors in Elk Mound defeated Durand that same night.

Colfax kept their hold on first place with a 66-43 road win over the Elmwood/Plum City Wolves three days later.

The Vikings, currently atop the D-SC with an 8-1 record and 8-3 overall, played in Elk Mound Monday, January 25, and hosted Glenwood City the following evening, Tuesday, January 26. Colfax will start a three-game road trip in Mondovi this Friday, January 29, travel to Spring Valley next Monday, February 1, before closing out the regular season in Durand on Thursday, February 4.

The score may not indicate it but the Bulldogs have shown a lot of improvement since they faced the Vikings the first time around. After Colfax took an 8-2 lead, Boyceville came back and held leads of 11-10 and 13-12, but the Viking’s defense began to take control. With a 15-15 score, the Vikings used their pressure defense to cause turnovers and they turned them into points on a 13-0 run.

McKenna Shipman started the streak with a steal and an end-to-end layup, Emilee Burcham-Scofield scored on an offensive rebound, and three different Vikings connected from three point land including Addisyn Olson, Bailey Bradford, and Marissa Harmon.

Just like that it was 28-15 and the Vikings continued their sharp shooting with Abigail Irwin hitting from the top of the key, Bradford drained another trey, Rylee Parker knocked down a pair of free throws, and Shipman scored from long range and short range as they took a 40-21 lead into the break.

After Jazzy Best banged home a couple of free throws for Colfax, Boyceville’s Kady Grambow went on a short run with seven of the Bulldogs next nine points to cut the Colfax lead to 47-31. But, it was raining three pointers in the Colfax gym as Shipman connected two more times while Irwin and Madi Barstad both drained one each to get the score to 63-36. All told, the Vikings connected for 13 triples in the contest. Plenty of reserves saw some playing time for both teams to finish things off.

“Boyceville did a nice job on the offensive glass and we needed to do a better job keeping them off the boards,” Colfax coach Courtney Sarauer said. “We were able to string a few nice runs together to stay ahead. McKenna Shipman was a nice spark off the bench with 17 points and 13 three pointers on our part was nice to see after some cold shooting against Elk Mound. It was a great team effort,” she concluded.

Ten Vikings reached the scoring column with six of them combining for those 13 treys in the contest. Shipman led the way with 17 points which included a trio of triples, while Irwin was the only other Viking in double figures with 12 points with a pair of long balls. Harmon scored nine points all from behind the arc, Barstad finished with eight points with one triple and Olson knocked down a pair of treys and a free throw for seven points. The Vikings were 10-of-16 from the foul line while Boyceville, led by Grambow’s 14 points, were 11-of-15. 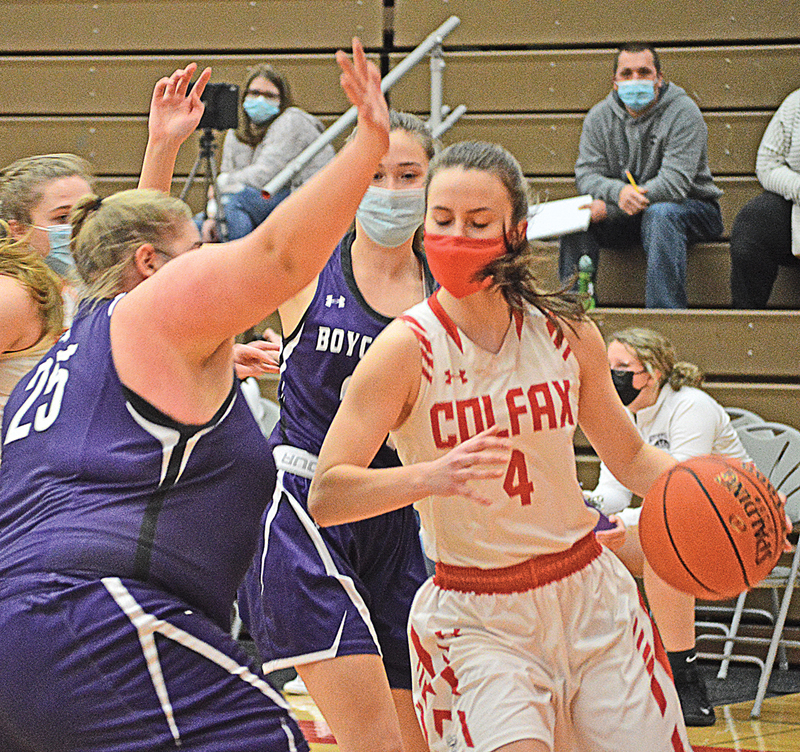 The Wolves are another team that seem to be on the upswing as the season progresses and it showed early when they stayed close to the Vikings until around four minutes to go in the first half. Then the Vikings defense began to use their pressure to create turnovers as usual, which seemed to jump start their offense and they led by six points at 37-31 at halftime. Barstad collected 11 of those points with a triple, a pair of short range shots and four-of four from the charity stripe. Best helped out with seven points with a pair of treys, while Burcham-Scofield and Olson combined for six-of nine free tosses.

The Colfax defense put the hammer down in the second half, holding the Wolves to just 12 points while they found their rhythm on the offensive side. Leading 54-37 midway through the second half, Colfax continued to add points and Tyler Noll’s bucket gave them a 20-point lead at 63-43. Jenna Goodell finished off the scoring with a final triple for the Vikings.

“It was another great win over a team that has been playing really well as of late,” Sarauer said. “Emilee Burcham-Scofield and Jazzy Best really stepped up and brought a spark off the bench that was needed. A great defensive effort held the Wolves to 12 second half points,” she added.

Barstad was high scorer for the Vikings with 15 points followed by Burcham-Scofield with ten and Best nine. Nine shots from behind the arc were made including two each by Best, Irwin, and Harmon while Barstad, Burcham-Scofield and Goodell each had one. There were plenty of foul shots taken by both teams with the Vikings knocking down 19-of-32 while the Wolves were 14-of-18 as Hannah Forester was eight-for-ten with a team high 13 points. 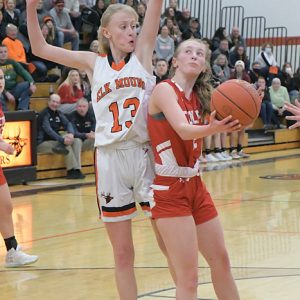 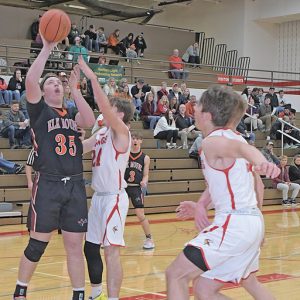