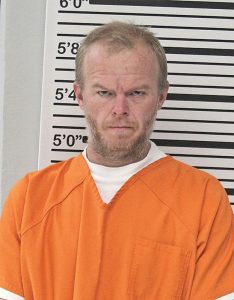 MENOMONIE — A Dunn County judge has found probable cause for the second of three defendants charged in connection with a homicide in the Town of Dunn and has bound the defendant over for trial.

Turgeson is charged with first degree intentional homicide, along with Ryan Steinhoff, age 37, and Ashley A. Gunder, age 24, in connection with the death of Bruce E. McGuigan, age 37, of Hayward, at N2564 440th Street in the Town of Dunn November 17.

Judge Peterson set bail at $500,000 cash for each of the three defendants during an initial court appearance November 25.

The felony charge of first degree intentional homicide also carries the modifiers of use of a dangerous weapon, as a repeat offender and as a party to a crime. Steinhoff also is charged with three counts of felony bail jumping, each with the modifier of being a repeat offender.

Sergeant Travis Mayer with the Dunn County Sheriff’s Department testified during Turgeson’s preliminary hearing that on November 17, sheriff’s department deputies responded to a call from George Welch, who was at Brian Lindo’s residence on 370th Avenue in the Town of Dunn.

When deputies talked to Welch at Lindo’s residence, Welch said there was someone badly injured at his trailer on 440th Street in the Town of Dunn.

During interviews at the sheriff’s department, Gunder told investigators Turgeson had killed the victim, although Turgeson and Steinhoff were both in the bedroom with the victim and she could hear them fighting in the bedroom, Sergeant Mayer testified.

At one point, Turgeson had asked Gunder to find a knife, and Gunder brought a knife with a green handle which was returned with blood on it, he said.

A green knife was located with a substance on it that was believed to be blood, Sergeant Mayer said.

Steinhoff admitted to hitting the victim, and Turgeson was present, he said.

The autopsy was conducted by the Ramsey County medical examiner’s office, and the preliminary findings indicate blunt force injuries and stab wounds and that the manner of death was homicide, Sergeant Mayer testified.

On cross examination, Covey, Turgeson’s attorney, emphasized that Welch had said Steinhoff seemed to be in charge, although Welch did not see the beating, and he was not in the same room as the victim.

Welch said he had a migraine headache and had gone to sleep in a different room. No one confessed to Welch that he or she had killed the victim, and Welch did not see Turgeson with a weapon, Covey said.

In addition, Gunder told investigators that she and Steinhoff had picked up the victim at his residence in Hayward. Turgeson was not in the car and did not ask anyone to pick up the victim, he said.

Gunder, who was inside the residence but was not in the room, said a hammer had been used to strike the victim and that Steinhoff had brought a hammer out of the room, not Turgeson, Covey pointed out.

In response to a question about whether Steinhoff indicated Turgeson had said Steinhoff should beat the victim, Sergeant Mayer replied, “no.”

The autopsy indicated the victim had numerous injuries and that some were more serious than others, Covey said.

When asked if the autopsy report had indicated who had caused the injuries, Sergeant Mayer replied, “no.”

When asked if there was any evidence about whether Turgeson had caused trauma to the victim’s head, Sergeant Mayer said he could not answer the question.

When asked if Turgeson had directed Steinhoff to do anything, Sergeant Mayer replied, “not based on my knowledge.”

When asked if Steinhoff was the only person who had admitted to hitting the victim, Sergeant Mayer replied “yes.”

Dunn County District Attorney Andrea Nodolf pointed out Turgeson had asked for the knife, that the autopsy had found stab wounds and that Gunder had said Turgeson had killed the victim.

Covey noted that Gunder was not in the bedroom when the victim was killed, did not see Turgeson stab the victim and never said how she knew Turgeson had killed the victim, to which Sergeant Mayer replied, “all correct.”

Party to a crime

Nodolf told the court she was requesting Turgeson be bound over for trial, that Turgeson was charged as a party to a crime, that a knife had been used and the victim had stab wounds and that there was sufficient evidence for a bind-over.

“Something horrible happened,” Covey said, adding that while Turgeson was present, there are unsupported allegations that Turgeson killed the victim and there is no evidence Turgeson kicked, struck or stabbed the victim.

Steinhoff did not say Turgeson did anything at all except remove the victim’s clothing, Covey said.

Turgeson asked Gunder for a knife. He was present, and he is charged as a party to a crime, Nodolf said.

Judge Peterson said he had determined there was probable cause a felony had been committed, and based on the circumstances, that Turgeson was involved in the crimes.

Turgeson, who was in custody at the time of the preliminary hearing, is scheduled for an arraignment on January 13 at 1:30 p.m.

Gunder is scheduled for a preliminary hearing before Judge Rod Smeltzer March 5 at 9:30 a.m.

Gunder’s case had initially been assigned to Judge Peterson, but early in December, she asked for a different judge to hear the case.