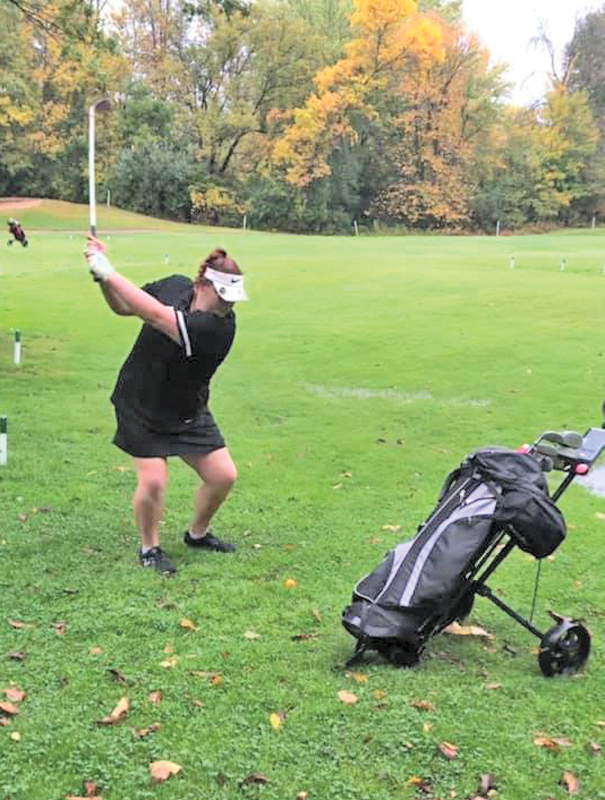 COLFAX’S Hannah Lemler prepares to hit a shot during the CloverCroix Conference tournament at Lake Hallie September 24. Lemler was the lone senior on the Colfax/Elk Mound girls’ golf team which finished the season last Wednesday, September 30 in regional play in Hammond. —photo submitted

The Colfax and Elk Mound ladies finished with a score of 442 which placed them in seventh in the ten-team, 18-hole tournament played at Pheasant Hills Golf Course in Hammond.

Middle Border powers Prescott and host St. Croix Central, ranked number one and two respectively in the most recent Division 2 state poll by the Golf Coaches Association of Wisconsin, finished in first and second place. Prescott captured the team victory with a low score of 339 followed by runner-up St. Croix Central with 364. CloverCroix Conference champion Eau Claire Regis/Altoona finished in third place with a 397 followed by Baldwin-Woodville at 413, Somerset with a 420, Ellsworth came in sixth with a 421, Colfax/Elk Mound’s score of 442 put them in seventh, Osceola and Stanley-Boyd tied for eighth place with 461 each and Amery finished in tenth with a 486.

Elk Mound juniors Olivia Clickner and Ella Reese led the local squad at last Wednesday’s regional competition as each shot a score of 106 over 18 holes on the par 72 course at Pheasant Hills. That put the pair in a tie for 23rd place just missing the final individual sectional qualifying spot by five strokes.

Another pair of Elk Mound juniors, Emma Nechanicky and Grace Shafer, tied for 34th place after each carded a score of 115.

Rounding out the local team’s scoring was the squad’s lone senior, Colfax’s Hannah Lemler, who shot a 124 for the tournament.

St. Croix Central junior Sally Vangsness shot a 76 on her home course to earn medalist honors, finishing just a stroke better than runner-up Ava Salay of Prescott. Grabbing the four individual sectional qualifying spots were Amery’s Kauylee Yzermans with a 95, Ava Pesha of Somerset with a 97, Emme Felmlee of Stanley-Boyd with a 100 and Ellsworth’s Katie Gillespie with a 101.