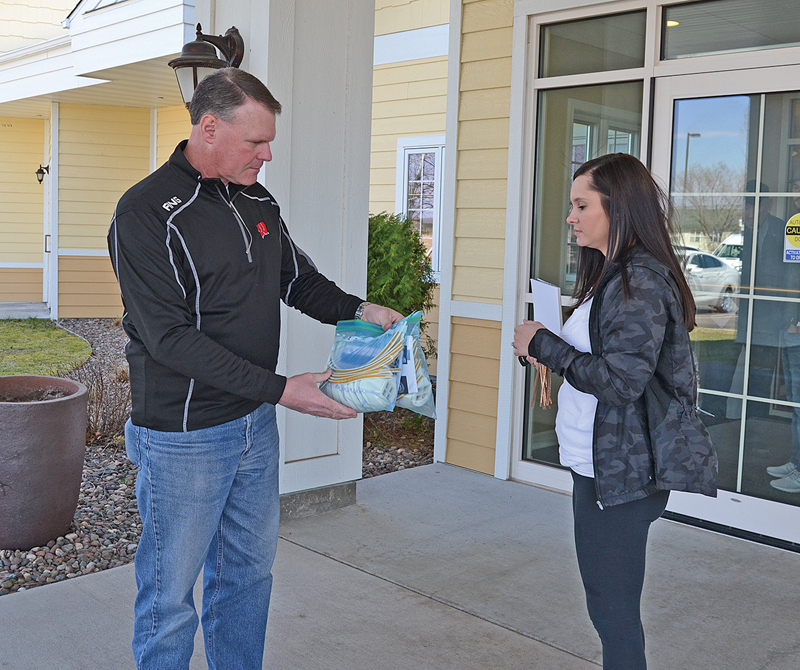 COLFAX  — With the COVID-19 coronavirus pandemic has come a shortage of Personal Protective Equipment for medical professionals.

To help fill some of the shortage for the Colfax community, Jamie Buchholtz, technology education teacher at Colfax High School, is using the school district’s 3D printers to make filtration masks that work like an N95 mask to filter out the virus.

The shortage of PPE is so severe that hospitals, clinics and nursing homes have resorted to using cloth masks sewn by seamstresses in their community.

The masks Buchholtz is making are called Montana Masks. The design came from a couple of doctors in Billings, Montana, who have put the design out on the Internet for everybody to use.

The design, Buchholtz said, is the same design that Boyceville High School teacher Andy Hamm and one of his students used to make protective masks with a 3D printer.

So far, Buchholtz has produced more than 40 of the masks.

The masks are made out of plastic that can be wiped down and sanitized and are constructed so new filters can be installed in between uses. 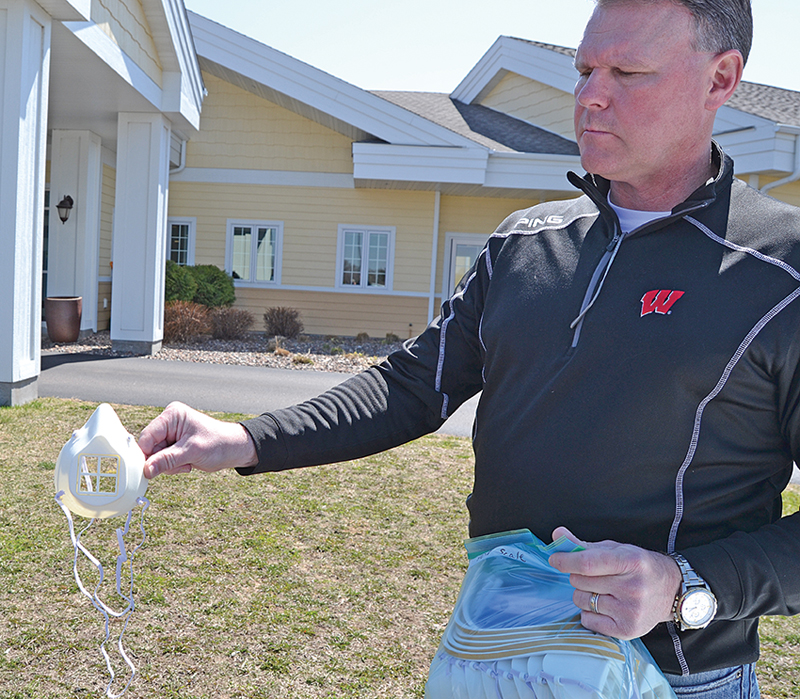 3D PRINTER MASKS — William C. Yingst Jr., Colfax school district administrator, holds one of the Montana Masks made by Jamie Buchholtz, Colfax High School technology education teacher, using the school district’s 3D printer. Yingst donated some of the masks to the Colfax Health and Rehabilitation Center April 23 and also planned to donate masks to other agencies in the community, such as the Colfax Rescue Squad, the Colfax Community Fire Department and the Colfax Police Department. —photo by LeAnn R. Ralph

William C. Yingst Jr., school district administrator, delivered 16 of the masks — along with a set of instructions on how to replace filters — to the Colfax Health and Rehabilitation Center on April 23.

Yingst said the school district also planned to donate Montana Masks to the Colfax Rescue Squad and to the Colfax Police Department as well as other agencies or facilities that need protective masks.

What is particularly interesting is that the Montana Masks can be heated with a hair dryer or a heat gun and formed to fit an individual’s face better. Rubber weather stripping is used to make the masks fit tightly.

“I supplied each mask with elastic bands and rubber weather stripping (so) the user can make a few adjustments using the process and materials to make a mask that is comfortable and safe,” Buchholtz said.

“The insert is used to hold and replace the filter material that you are using. A simple medical mask can be used as a filter. It can be cut into many pieces that can be used multiple times,” he said.

The earliest 3D printing systems, called Rapid Prototyping technologies, were available in the late 1980s but had only industrial applications. 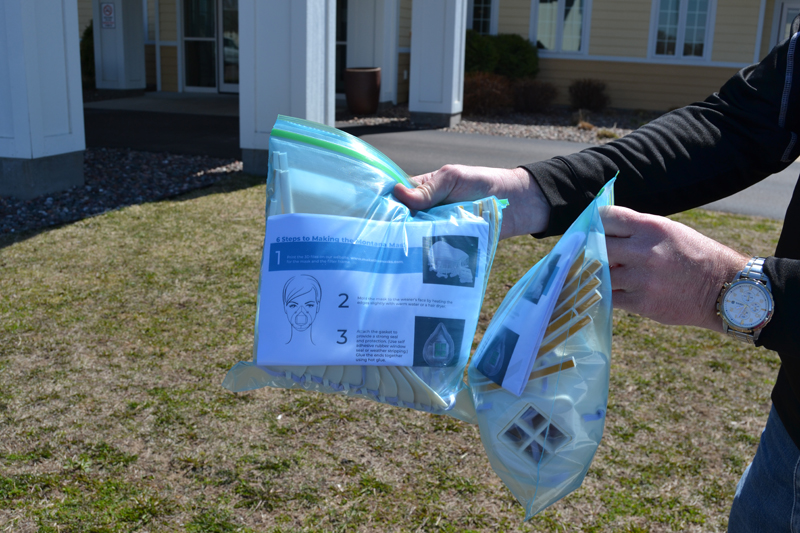 INSTRUCTIONS — The 3D printer masks made by Jamie Buchholtz, Colfax High School technology education teacher, were donated to the Colfax Health and Rehabilitation Center with instructions on how to custom fit the filtration masks and how to change the filters. During the COVID-19 pandemic, Personal Protective Equipment is difficult to obtain, and the school district wanted to do something to help the community, said William C. Yingst Jr., school district administrator. Yingst also planned to donate Montana Masks to the Colfax Rescue Squad, the Colfax Community Fire Department and the Colfax Police Department. — Photo by LeAnn R. Ralph

Over the years, the RP technologies continued to be developed and refined, and in 2013, the kinds of commercial 3D printers used today became more widely available.

“The 3D printer works a lot like an inkjet printer you would have at home, but instead of one thin layer of ink, it lays down hundreds of layers of material,” Buchholz explained.

“Since the design aspect (for the Montana Masks) was already done, I just had to download the files and import them into the computer program that runs the 3D printer. From there, I had to adjust a few settings and print a couple, making changes in the settings until the 3D printed model was the quality I wanted,” he said.

A 3D modeling program also can be used to design anything that can be printed by the 3D printer, Buchholz said.

“The Solid Modeling class I teach at Colfax is a transcripted credit class through CVTC, and the students receive college credit. They get to design 3D models on the computer and print them. It’s exciting to take something from their imagination, draw it up on the computer, and turn it into something tangible,” he said.

Buchholz is making several different sizes of the Montana Masks, and depending on the size of the mask, the 3D printer takes anywhere from four to five hours to print each one.

The print time for the masks does not include setting up the program, calibrating the machine and maintenance on the machine, he noted.

During the school year, Buchholz also designs and then uses the 3D printer to make replacement parts for the machines in the Colfax High School shop as well as parts for lockers and other items around the school building.

“The students use it to print a variety of things from 3D models of cells and bones for biology class to a fully functioning prosthetic hand. At times, the printer runs non-stop for days on end,” he said.

In addition to the Colfax school district’s initial 3D printer, the budget for next fall included money to purchase another 3D printer.

Instead of waiting until next fall, Yingst ordered the additional 3D printer this spring.

“It’s great to have a school that promotes and supports technology that benefits the students, the district and the community,” Buchholz said.

The additional 3D printer was delivered several weeks ago, and Buchholz said he is using both printers to make Montana Masks for the Colfax community.

“The 3D printers are great learning tools for the students. They can use computer-generated models and turn them into prototypes or working parts,” Buchholz said. 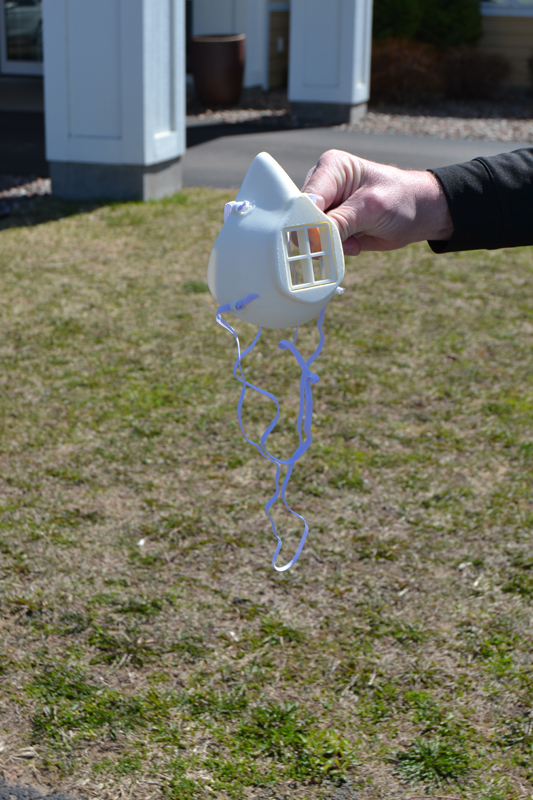 MONTANA MASKS — The plans for the filtration Monanta Masks were developed by several doctors in Montana and then posted to the Internet for anyone to use. Jamie Buchholtz, Colfax High School technology education teacher, used the school district’s 3D printer to make masks to donate to the Colfax Health and Rehabilitation Center and for other agencies in the community, such as the Colfax Rescue Squad, the Colfax Community Fire Department and the Colfax Police Department. — Photo by LeAnn R. Ralph

Kenzie Galetka, nursing home administrator at the Colfax Health and Rehabilitation Center, says that her first comment about the donation of the Montana Masks by the Colfax school district is, “Wow, what a donation! We are so grateful!”

The facility is currently using cloth masks to save on the medical supplies CHRC has on hand, she said.

“If it comes to a point where we have someone on precautions for potential COVID, or we have a diagnosis of COVID, these are going to come in handy for sure,” Galetka said.

“The fact that they are a wipeable material rather than needing laundering or getting tossed is really neat,” she said.

“Having the support of the school with this donation is absolutely incredible. All of us here at CHRC are so blessed. Even better yet, we are healthy and safe, and donations like this are keeping us that way… this whole community has been just incredible through this. Colfax Strong!” Galetka said.

Galetka notes that she attended school at Colfax Elementary when Yingst was the elementary school principal.

Colfax switches to Liberty Mutual health insurance at an annual cost of $102,248