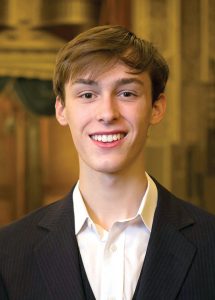 COLFAX  —  Tate Russell, the valedictorian of the Colfax High School Class of 2019, is the son of Kobi Shaw and Steve Russell.

About a week ago, Mrs. Christensen said to me, “I have high expectations for your speech, and I am looking forward to something different than every other graduation speech.”

It was a good deal of pressure. I try to be unique and creative in what I do. But I know it is nearly impossible to get through a graduation speech without a good number of cliches.

To combat this, I am going to take every, single graduation cliché I can think of before I get to the good stuff. Then I won’t actually have to use them in my speech.

Cliche No. 2 — Self-deprecating joke. — It was a long journey. Back in freshmen year, I was an awkward, lanky 14 year old, trying to find my way around this place — and now I’m 18.

Cliche No. 3 — Some joke about the amount of work that our English classes thrust upon us.

Cliche No. 4 — The joke about a retiring teacher getting old.

Cliche No. 5 — Sharing an inside joke that most of the audience doesn’t get.

Cliche No. 6 — This is the best group of people I could have graduated with, and I wouldn’t want it any other way.

Cliche No. 7 — We are always going to remember this time and these people.

Cliche No. 8 — A quote from either Shakespeare, Martin Luther King, Dr. Seuss … that most people forget by the time graduation is over.

I can keep going on with any number of cliches. But graduation is a huge cliché. It’s overdone. It’s done the same way every single year.

And isn’t that the point?

When I was in sophomore year, I participated in forensics, which all of you underclassmen should join. I performed a piece called “A Salutatorian’s Gratitude” in which I played a sarcastic passive/aggressive overachiever who happens to be giving a graduation speech. Which, if you know me, that’s not like me at all.

In this piece, my character, James Smythe, spoke to the crowd, urging them to be grateful to their school, saying, “How sharper than a serpent’s tooth it is to have a thankless child.”

Oh, that was Cliche No. 8! Shakespeare! I can’t believe I missed that.

Basically, it means you guys should be grateful, because if you are ungrateful, it’s no fun to raise you. And why shouldn’t we be grateful? I am. I am grateful, really grateful, to have spent my time at Colfax. And I’ll tell you why.

I love the fact that I spent my 12 years here with the same people.

I am forever thankful for our extracurriculars here, without which, some of us would have never left the house. Honestly, the opportunities at Colfax are so immense, if you want to do something, all you have to do is ask.

Where else would I have been able to arrange music for the choirs?

Where else would I have been able to participate in [plays and musicals]?

Where else would have allowed me to play basketball for two entire years? — Oops. Cliche No. 2. Self-deprecating joke!

I am grateful for our wonderful teachers here at Colfax. I feel like I know every one of them, and all of them know me. I feel as though I can have a conversation with each and every one of them, and I hope that all of you feel the same way. Even Mr. Woodford, in his final year at Colfax, is still sentient enough to talk. — Cliche No. 4, retiring teacher joke!

But mostly I’m grateful for all of you guys. The Class of 2019. You are awesome. You are funny and athletic and caring and weird and crazy — and this run-on sentence would have gotten me a zero on my English paper. — Cliche No. 3, a joke about English classes!

You all are wonderful, and I wouldn’t have it any other way. — Cliche No. 6!

Actually, I take that back. I could have had it another way. I would have spent more time with you. I spent a lot my time in high school away from my graduating classmates. I regret that. Because when I think of this class, I think of the best memories I’ve ever had. I’ve shared some of the best highs and some of the hardest falls with you, and I’m always going to remember that. I love you all. — Cliches No. 7 and 9. A double whammy!

I know I said I wouldn’t use cliches. But obviously I have. It’s really hard not to. And that’s how it should be, honestly.

The inspirations and ideas have stood the test of time, and hearing them makes us feel like we’ve got  the best, which we do.

Graduation is the first day of the rest of our lives. And frankly, that’s terrifying.

Honestly, if we as a class can survive the chaos that is [inaudible’s] room, how hard can it be? — Cliche No. 5, inside joke!

We’re smart. We’re savvy. We’re prepared for the world. Now we just have to go out and get it. Because after tonight, we will all have our diplomas. A physical representation of all our hard work.