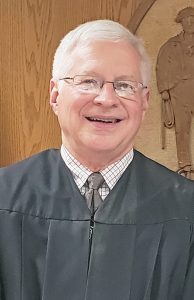 Judge Edward Vlack, who presides over Branch 2 of the St. Croix County Circuit Court, has announced that he will seek re-election to that position in the upcoming spring election to be held on April 2, 2019.

Currently, Judge Vlack presides over the Domestic Violence and Family Issues Subcommittee of the Community Justice Collaborating Council which has initiated new procedures for processing domestic violence cases and is also in the process of creating a Domestic Violence Court over which Judge Vlack will preside.

Judge Vlack served as an Associate Dean on the Wisconsin Judicial College from August 2010 to August 2016, and has appeared as an instructor of other judges at a variety of judicial conferences. He was also the judge that assisted the Children’s Court Improvement Program in the creation of online training in juvenile law for judges.

Judge Vlack looks forward to continue working with the other St. Croix County judges to provide the efficient administration of justice for the citizens of St. Croix County.

Judge Vlack has three daughters and four grandchildren.  He is a member of St. Bridget’s Catholic Church in River Falls and is one of a number of volunteers who record weekly masses for its shut-in church members.  Judge Vlack is also a volunteer member of the River Falls Fire Department, and holds the position of Assistant Fire Chief for training.