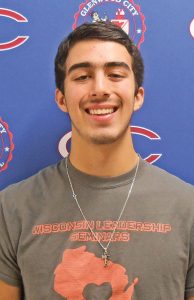 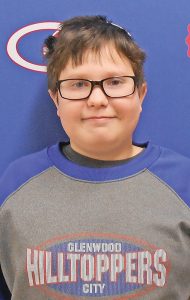 Glenwood City High/Middle School is proud to announce the October Students of the Month.   The character trait that served as the focus for the month was respect; students who hold others in esteem while showing a regard or consideration for classmates and staff alike. While GCHS/MS is filled with students who demonstrate these characteristics on a daily basis, this month’s honorees epitomize respect and do so with, what appears, a minimal effort, indicating it truly is a part of who they are.

The October Student of the Month at Glenwood City High School is junior, Nick Melendrez. In a Student of the Month first, Nick was nominated by two staff members, Dr. Ketola and Mr. Strong. Dr. Ketola recognized, “In the three years I have known Nick, he has always been respectful; not only to his teachers, often addressing us as sir or ma’am, but also to his coaches and his peers. When he rides a team bus, he always thanks the driver, and makes sure everything is clean and in working order before departing. In the classroom, he gives his best effort 100% of the time. On the football field and at practice, he remains focused and upbeat… trying to not only get better himself, but working to make those around him better as well. In every aspect of life that I have observed him in, Nick has demonstrated and commanded respect.”

Mr. Strong shared, “Nick has become a positive leader in our high school over the past year. He is kind, caring, hardworking and very respectful to both students and staff. Nick demonstrates all of the characteristics of a young man with great integrity. He listens well to others with a genuine concern, while demonstrating proper manners of respect. I have witnessed this both in the classroom, hallways and on the practice field. Nick is a young man that models the meaning of respect on a daily basis.” Nick is the son of Pam and Sam Melendrez.

The October Student of the Month at Glenwood City Middle School is eighth grader, Marcus Gluege.  Marcus was recognized by Ms. Holter and Ms. Schutz, who stated, “Marcus is ALWAYS respectful to both adults and students. Marcus is always on task and completes assignments without being disruptive. He greets us (his teachers) when he enters the room and makes sure to come up to me and say goodbye before he leaves. Overall, the class can be disruptive at times. For a friendly letter assignment, Marcus chose to write his letter to Mrs. Schutz and me apologizing for the behaviors and the lack of respect in the room. Marcus has never been anything but respectful.”  Marcus is the son of Victoria and Mark Gluege.

Students of the Month are rewarded by having a lunch provided for them and a friend as well as being issued a unique piece of Hilltopper apparel.  In addition, students are provided with preferential parking (for them or a family member).

We would also like to recognize the following students who were nominated in conjunction with their ability to be respectful – Tucker Lagerstrom by Ms. Nichols; Isabel Davis by Ms. Minor; and Blake Wakeling by Mr. Schutz.