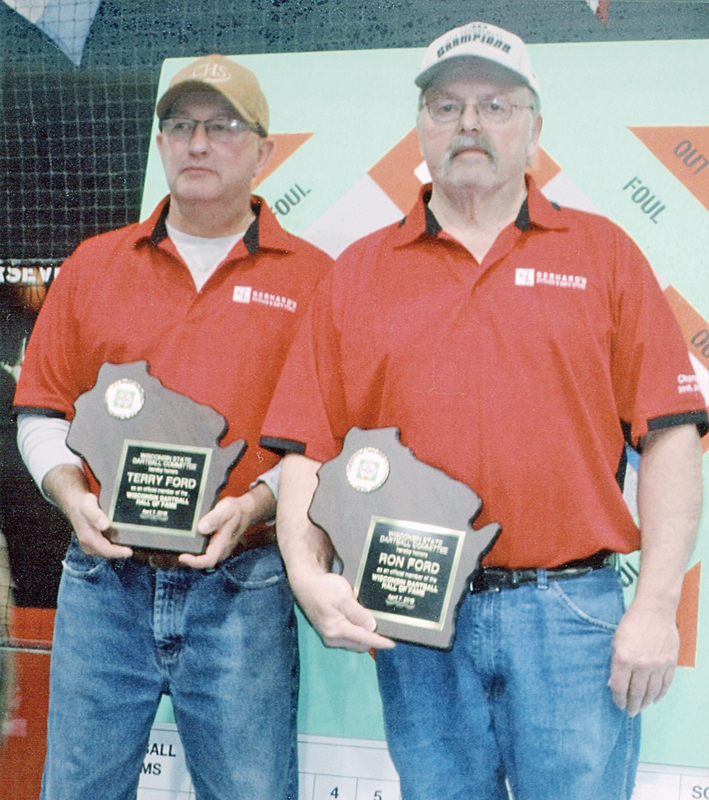 DARTBALL HALL OF FAME inductees Terry and Ron Ford were inducted, this is the first time brothers have gone in at the same time. —photo submitted

MENOMONIE — For the Ford brothers, the game of dartball, much like a game of baseball but played on a board that is four feet by four feet, has been a way of life since Ron was 13 and Terry was 10.

Growing up Ron and Terry began playing dartball when their father painted a board on the barn door at the farm where they grew up north of Menomonie. The brothers continuously played the game with their dad and eventually wore the door thin enough it had to be replaced.

Terry explained that he started playing on a league at the age of 13 for his father’s church league, Ron said he also started at 13 on the church league. The Ford brothers went on to play on the same league for 26 years together, usually taking first or second place in the Northwest Dartball Tournament.

“After a while we got too competitive though,” stated Ron, “so now we are on different teams.”

Ron has been on six Class A state championship teams and has had many seasons with over a .500 average with his highest average coming in the 1985 season in Eau Claire with a .603.

Younger brother Terry has been on four Class A state championship teams and had his highest league average in 2014 when he hit a .614.

For the Fords, it was an exciting moment as the ceremony for the 2018 induction was held in Eau Claire. The entire family that was able to be there, including Ron and Terry’s 95 year old mother, Marian.

Marian has been playing dartball about the last ten years, stated Terry, since their father passed away and she needed something to do to pass the time.

The Dartball Hall of Fame has only been inducting people since 2009 when it started with Jack Wilson Sr., but according to Terry and Ron, brothers have been inducted at the same time since the inception of the Hall of Fame.

In order to be inducted, the committee has a minimum amount of requirements such as nominees have to be at least 50 years of age and played the sport for 25 years or more. There is no requirement for a minimum high average or lifetime average.

If an applicant is not admitted the year he or she is nominated, the application stays on file with the committee with the chance of being inducted further down the line. More than one person can also nominate a candidate for induction.

Ron and Terry, along with their sister, have started a “fun league” in Menomonie at Dean & Sue’s for anyone who wants to learn about the game of dartball and how to play. No experience is needed as the brothers will teach anyone to play at no cost. For those who are interested, head to Dean & Sue’s on Monday nights at 7 p.m.