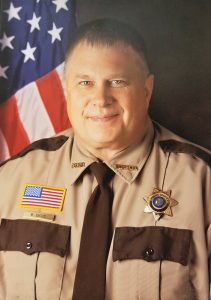 COLFAX  —  Rodney Dicus is the Democratic candidate on the ballot in the November 6 election for Dunn County sheriff.

Dicus, an Elk Mound resident, has worked for the Dunn County sheriff’s department for 32 years and  is an investigator, primarily in the area of child protection. He grew up on a farm near Ladysmith and was the fifth of eight children in the family.

Dicus earned a bachelor’s degree in criminal justice from Mt. Senario College. Dicus and his wife have two adult children, one of whom is a speech therapist and the other is a student at UW-Stout. He became a dispatcher for Dunn County in 1986 and a few years later became a patrol deputy. He has been an investigator for the sheriff’s department for more than 10 years and is the department’s DARE instructor (Drug Abuse Resistance Education) in the county’s school districts.

The Colfax Messenger and the Glenwood City Tribune Press Reporter sent out a questionnaire to Dicus and to the Republican candidate, Kevin Bygd.

Here are Dicus’s answers to the questionnaire. Questions 1, 2 and 3 were combined in the responses:

• From your point of view, what are the top three issues facing the Dunn County Sheriff’s Department? Prioritize those three issues, and then describe how you would approach the issues or what you would do to help find a solution. What could Dunn County residents do to help provide solutions for these issues?

School safety for our children — To collaborate with the schools and all local law enforcement agencies as well as any state or federal agencies to come up with the best possible safety plans. In addition, the residents of Dunn County could help by saying something if they see something that they believe law enforcement should investigate.

Property crimes — To have a proactive department rather than a reactive department as well as to have the eyes and ears of the community to assist in gathering information to help solve some of these crimes.

• Other comments/ Is there anything else you would like Dunn County residents to know?

If elected as Dunn County sheriff I will work vigorously to make Dunn County a safe and good place to raise a family, I would like to do this with the help of the citizens of Dunn County.

“A Christmas Carol” coming to the Cozy Theater December 18