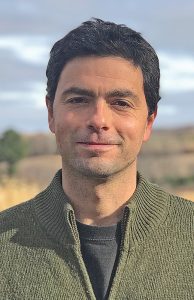 John Rocco Calabrese worked as an apprentice woodworker for two years before moving on to a large cabinet shop where he became the department supervisor and advocated for dozen of employees. Calabrese now owns and operates a small, one man woodworking and carpentry shop. Calabrese resides with his wife, Simone, and their two boys in Menomonie.

The Glenwood City Tribune Press Reporter sent out a questionnaire to the candidates and here are Mr. Calabrese’s responses:

From your point of view, what are the top three issues facing the state of Wisconsin and how would you approach those issues?

• Corruption: It is his belief that since 2015 there have been changes to Wisconsin’s campaign finance laws, spending in elections to candidates and more importantly to party campaign committees has more than tripled.

“This is not because wealthy interests and huge business groups love exercising their free speech, it is to buy influence,” stated Calabrese.

The results of this spending affects every issue the state faces, he explained. Those who spend the most are awarded tax breaks, incentives, subsidies and sweetheart deals that deplete the funding for education, infrastructure and local rural development. Calabrese wants to work to roll back the 2015 changes.

• Groundwater: The number of Wisconsin communities unable to use their groundwater due to contamination grows every month stated Calabrese. The number of Concentrated Animal Feeding Operations (CAFO) has grown 400 percent from 50 in 2000 to 252 in 2016. Combined with a roll back on laws that govern manure spreading and runoff, this has been a disaster for small family farms and for groundwater.

“We must transfer some of the funds given to well connected campaign contributors to strengthen DNR oversight and work with farms, large and small to make sure our precious water is safe for future generations,” explained Calabrese.

• Health Care: According to Calabrese during the last session, a “Badger Care for All” bill was introduced in the legislature, but the bill never received a committee hearing.

“This bill was not a government take over, it simply raised the threshold by which people could access our Badger Care program. Everyone gets sick, everyone needs health care,” said Calabrese.

It is his belief that it is possible, if they have the will, to shift priorities to work toward a “Badger Care for All” system. It would be an instant boon to employers and businesses that are hesitant to start or expand their operation due to health care costs. If Wisconsinites were paying less for health care and pharmaceutical drugs, it would put more money directly into local economies to purchase local goods and services.

What are the top three issues facing the 29th Assembly District? If the issues for the state and the 29th are the same, talk a little bit about some aspect that is different for state-wide versus assembly district.

In Calabrese’s mind, the main two priorities, are the groundwater and the quality of the lakes and streams in the 29th district. According to Calabrese Lake Menomin in Menomonie is not only unattractive in the summer months, it’s dangerous. The watershed suffers from huge amounts of nitrates and runoff that lead to hazardous algae blooms.

“Also, in Emerald, the Emerald Skye Dairy has received citations and deep concern from local residents about their farming practices,” stated Calabrese, “We must keep a close eye on and strengthen the rules for those who contaminated our wells.”

His belief is that residents of the 29th District should always be comfortable bringing up issues to their local representatives, and they should seek out the time and place of local Town, City and County Board meetings and attend when able. Reciprocally, the representatives should do their best to be at those meetings as well and listen to the concerns of their constituents.

Is there anything else you would like the residents in the 29th Assembly District to know?

Calabrese stated his campaign is refusing to accept any Political Action Committee (PAC) donations or financial assistance from any political party. He believes this is the best way to remain accountable to the people, and the people alone.

“I don’t believe every legislator is corrupt or inherently deceptive. It is not about individual lawmakers, it is about the system that pulls candidates and lawmakers toward the rooms where the money is, and away from the Town Halls where the local concerns are being discussed,” stated Calabrese. “The best way to begin to make the proper changes to the current money driven political game, is to refuse to play it.”

Drug Take Back Day is October 23