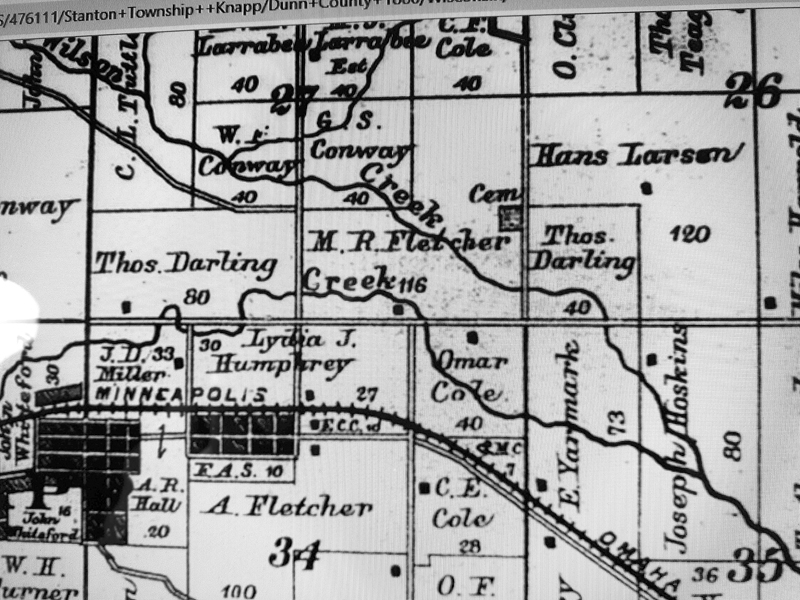 PLAT MAP — The plat map for the location of the Brookside Cemetery from 1888 that shows the cemetery marked on the Fletcher property.

STANTON TOWNSHIP – At this time of year, most people are trying to avoid cemeteries, especially old run down ones. However Tim Wyss, formerly of Stanton Township has a passion about one such cemetery. Brookside cemetery in Stanton Township is probably one that most have never heard of, let alone knew that it even existed.

Wyss, who grew up on a farm outside of Knapp, lived not far from this cemetery and it has been a passion of his for nearly 50 years. Wyss who taught Agriculture in Clear Lake for 35 years and still lives in Clear Lake is also somewhat of a history buff and has done extensive research on the Brookside Cemetery.

Although Wyss has always known about this cemetery, one of his earliest memories of the cemetery was when his 4H group cleaned up the cemetery.

Now basically abandoned, Brookside was first established in 1881. According to Wyss’ research on June 11, 1881, the Chicago St. Paul Minneapolis & Omaha Railroad deeded 4 acres to the Town of Stanton for $40. It was recorded on July 30, 1881 in the Dunn County Deed book. It was platted as a cemetery on April 13, signed on November 20, 1882 and recorded at the county on December 31, 1886. Thirty-six of the 40 acres plus an additional 80 acres of adjoining land was owned by M.R. Fletcher.

Later Maurie and Babe Caturia owned the farm that Brookside Cemetery had been taken from and they presumed they owned the entire 40 acres. When they offered that land to their daughter and son-in-law to build a house on the property, they discovered that it didn’t belong to them. It still belonged to the Town of Stanton.

At some point in history, it was more or less decided that the Forest Hill Cemetery was a better location for town of Stanton residents to be buried and no more new plots were sold at the Brookside cemetery and soon it became neglected.

“I’ve always felt this is a place to be honored and respected for a burial place of human remains,” comments Wyss. Thus his quest to have the Brookside cemetery properly cared for. Wyss in his research has come across mention that some of the bodies in the Brookside cemetery were exhumed and moved to another sight but he hasn’t been able to confirm this as fact. However there are still some headstones at the Brookside cemetery, including a headstone from the Vanderhoof family that leads him to believe that there are indeed still some bodies buried there. Being the history buff that he is Wyss has also researched the Vanderhoof family extensively.

Wyss has been in contact with the Lewis family for several years trying to get the cemetery back into the town’s hands, so to speak, so the cemetery could be restored. Nan Lewis has basically agreed to give the land back to the town or to a non-profit group. Wyss has also been in contact with Rich Monn, Stanton Township chairman. He too agrees that it should be restored to public property.

Through Nan’s attorney, she is willing to give it to a proper place, as she won’t sell it to a private individual. Monn has contacted the Dunn County Historical Society and they were supposed to get in touch with Wyss about the background of this property because they have an interest in being the owner of it but have not as yet contacted him.

Wyss enthusiastically states, “It’s cool to me that we’re this close to putting it back into public hands. The bottom line, I think that something good has got to happen out of this. The town is skeptical because they are afraid of what costs will come out of it.”

On a bright note, Monn is almost certain that he would be able to get some inmates out from the St. Croix Correctional Facility to work on the initial clean up and brush removal, etc. Also he had mentioned that there were some neighbors interested in getting involved either financially or mowing it every so often throughout the summer.

And while the story hasn’t come to an end, Tim Wyss will certainly be happy when his 50 year old quest comes to a happy and just ending.