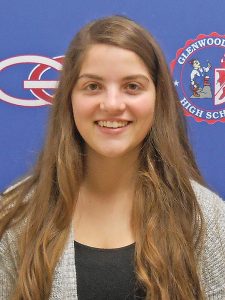 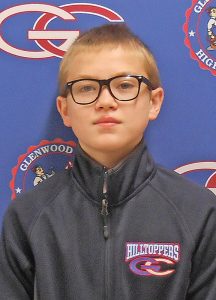 Glenwood City High/Middle School is proud to announce the September Students of the Month. Optimism was the character trait that was the focus of the month; students who demonstrate a hopefulness and confidence about their future – whether that be long-term or the immediacy of this school year.

These are the students who have a tendency to make lemonade out of lemons and view the glass as half-full rather than half-empty. This trait is important to be mindful of at any point, but the start of a new school year provides us the opportunity to recognize it in students who are eager to find success in all that they encounter. Our staff has identified the following students who always demonstrate these traits in their daily interactions.

The September Student of the Month at Glenwood City High School is senior, Delaney Quinn.  In nominating Delaney, Ms. Edin stated, “Maybe not everyone that knows Delaney Quinn would agree the first word that comes to mind is optimism. Many other words come to mind – considerate, dedicated, compassionate, driven, and focused – but if you really know Delaney, you know that optimism fits her very well.  Delaney has had to face and conquer many battles in her life, but has met every one head on, including school and athletic challenges.  Delaney has the ability to see the positive in anyone, at any time, in any situation.  She is a very humble person and does not always see the power in the traits that she has, but is one that speaks volumes to her friends, peers, and teammates.  Delaney is able to reinforce confidence in herself and her peers around her and keep them motivated and excelling at the task at hand. Delaney is passionate, positive, and insightful to those around her.  To do that, you have to be optimistic.”  Delaney is the daughter of Greg Quinn.

The September Student of the Month at Glenwood City Middle School is seventh grader, Logan Rands.  Logan was recognized by Ms. Holter, who stated, “Logan is so positive about his home life with his foster parents.  He took the time during a writing assignment of choice to write them a letter thanking them for all they have done for him. He also talks about it openly with Mrs. Schutz and me.  They have taught him how to keep a house clean and care for himself.  He is grateful for their family, all of the clothes they have given him and experiences he has had with them as a family.  He also is positive in the classroom.  He just has a great attitude about who he is and his life right now! He has come a long way since last year.”  Logan is the son of Jacob and Lasey Rands and Brent and Jessica Zobel.

Students of the Month are rewarded by having a lunch provided for them and a friend as well as being issued a unique piece of Hilltopper apparel.  In addition, students are provided with preferential parking (for them or a family member).

Congratulations to Delaney and Logan!

We would also like to recognize the following students who were nominated in conjunction with their ability to be optimists – Dillon Hierlmeier by Ms. Jones; Connor Olson by Ms. Hentz; Noah Brite by Mr. Lamb; Dakota Clark by Ms. Schutz and Tayler Nutter by Ms. Minor.