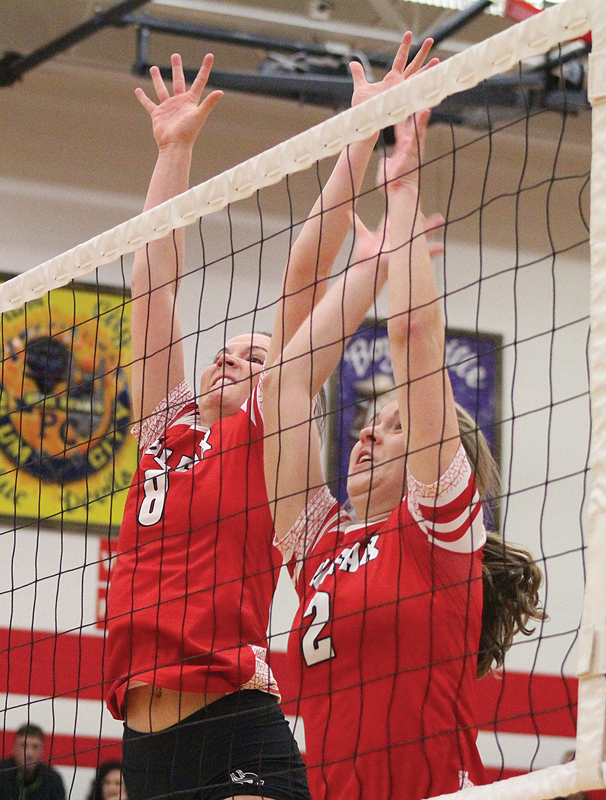 FOR THE BLOCK— Taylor Irwin (#2) and Samantha Pretasky go up for the block during Saturday night’s Regional Championship against Eau Claire Regis. —photo by Amber Hayden

COLFAX — The Vikings’ volleyball team took the fight to both Durand and Eau Claire Regis this past week in a pair of WIAA Division 3 Regional tournament contests.

Despite aggressive play by the Panthers throughout the entirety of the match, the Vikings squad secured three consecutive wins to advance to Saturday’s regional championship.

Hosting the regional title showdown just two days later, Colfax catapulted to a two sets to none lead in the October 20 match. But the second-seeded Regis Ramblers, who finished second to Altoona in the Cloverbelt’s West Division standings, rallied to win the next three sets including a 15-13 victory in the decisive fifth game to cop the regional crown and sectional berth while breaking the Vikings’ and their fans’ hearts.

The Lady Vikings, who finished the season with an impressive 27-8 record, defeated Regis 2-1 in the season-opening quadrangular back on August 21 but could not repeat the feat for a second consecutive regional championship.

“The ebb and flow of a volleyball match is often volatile, the momentum can shift ever so quickly,” commented Colfax head coach Pam Meredith. 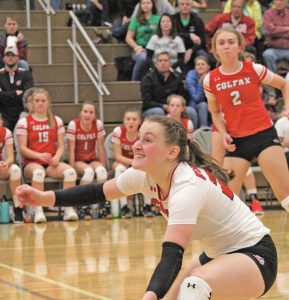 TRYING TO KEEP IT ALIVE for the Vikings was Senior librero Alyssa Dachel (#20) in the fourth set. —photo by Amber Hayden

The Vikings came on strong against the Panthers last Thursday evening, October 18, at a home contest in the WIAA Division 3 Regional semifinal’s match and sent the Panthers packing with their tails between their legs following a three-set sweep.

“This isn’t the same team we faced earlier in the year,” stated coach Meredith, “they were more aggressive tonight which made us play harder.”

The Vikings ripped the floor out from under the Panthers in three by scores of 25-20, 25-17 and 25-22 and giving Colfax the chance at a Regional Championship.

Rachel Scharlau was a force to be reckoned with during the Thursday night match up putting down 15 kills for the Vikings, as well as four assisted blocks and four digs against Durand.

“Rachel played the hardest I’ve seen this season, she played her heart out,” commented coach Meredith.

Backing Scharlau up on offense Kameri Meredith put up nine kills, Jozie Buchanan added in seven and Samantha Pretasky tacked on six of her own.

There were 65 digs against the Panthers during the October 18 game giving the Lady Vikes 21.7 digs per set. Taylor Irwin led the defense with 18 digs for Colfax, libero Alyssa Dachel tacked on 14 and Kameri Meredith contributed 11 of her own.

Jozie Buchanan and Taylor Irwin put up 34 assists between the pair, while Alyssa Dachel found herself receiving the ball 25 times.

The Saturday evening, October 20 regional championship match, that according to coach Meredith, is one that will haunt the Colfax Vikings for awhile.

“There is nothing worse than taking control of a match early and being up two sets and then watch it slip away from you,” stated Meredith. 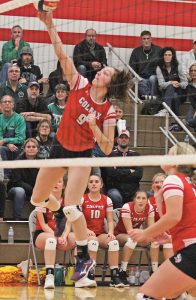 KILL SHOT— Savannah Henricks sets the kill shot during the fourth set of the Regional Championship against Regis. —photo by Amber Hayden

Samantha Pretasky took the lead on offense with 14 kills for the Lady Vikings, Jozie Buchanan added in 11 more and Kameri Meredith found her way to the net for nine more.

Set three the momentum shifted for the Vikings as Regis took to a change up in their middle rotation. Unfortunately in set three Colfax suffered nine hitting errors, three service errors and two other unforced errors.

In the five sets the Lady Vikings put up 14 aces, Taylor Irwin and Jozie Buchanan both served up five aces a piece and Samantha Pretasky came up with four of her own during the Regional Championship.

“In set four we decided to spin our lineup three rotations,” explained Meredith, “so we could line up the same players as set one and two. Regis out played us in set four by having 15 kills and only three hitting errors.”

Jozie Buchanan and Kameri Meredith took the lead on defense with the pair of players putting up 20 digs a piece, Alyssa Dachel contributed 19 digs and Taylor Irwin dug deep for the Vikings for 13 digs.

The Vikings coaching staff gambled at the start of set five as they moved into their fifth rotation which has been their strongest rotation on offense and defense thus far in the season. In a set that goes only to 15 the Vikings could have no leeway for errors.

Setting up the assist 27 times for Colfax was Jozie Buchanan with Taylor Irwin tacking on 11 more during the WIAA Regional matchup.

The Vikings quickly found themselves down 3-7 before Samantha Pretasky stepped up to the service line and put up three aces against the Ramblers,  with the help of two kills from Kameri Meredith Colfax found themselves up 10-7.

The last two points scored by the Ramblers were off of an offensive kill and a defensive block in the fifth set.

“The girls played their hearts out, they should be extremely proud of how hard they played and the incredible season they had,” Meredith said, “I can’t say enough about our two seniors, Alyssa Dachel and Savannah Henricks. Their work ethic and leadership throughout the season was amazing and they will truly be missed.” 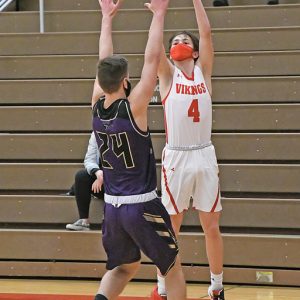 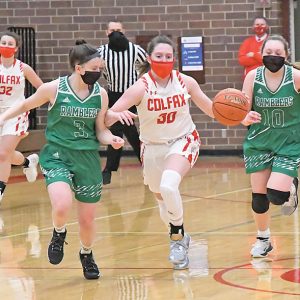 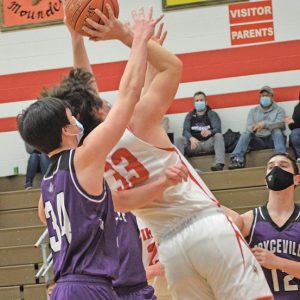